A little over a year ago this idea that we'd be moving back to Hong Kong began to percolate. And then it actually took shape. And then we did, and here we are.

The thing that made me dizzy with glee was the unexpected symmetry. The closing of a loop. Here's the thing... my oldest son began Kindergarten here in Hong Kong, the first time we lived here. In the most perfect bookend ever, my oldest son just started his last year of compulsory education, also here in Hong Kong. Maybe that doesn't seem like a big deal, but in between the first time and this time there were three elementary schools in America, an online academy in Macau, a local Chinese boarding school in Shanghai, and the first year of A Levels last year in Hong Kong. A mind-boggling eight houses in four countries.

It's strange and satisfying and beautiful, the very winding road that led us away from here and then back again, and mostly I'm just in awe of how it all worked out. 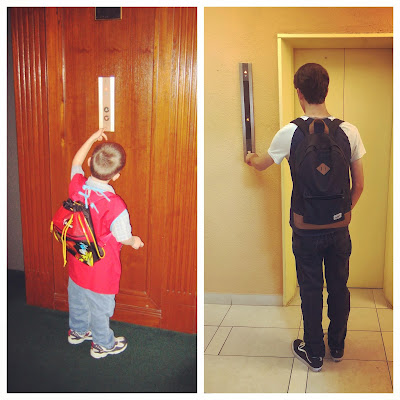 We left Hong Kong the first time in the middle of the school year, an awkward time for families to move. We had to make a nearly impossible decision of what grade to put this child of ours in for his first year of school in America, with their different set of dates as Kindergarten criteria. That decision kept me up nights because all I could think about was this exact moment of time I'm living in now... did we want him to be 17 or 18 years old when he graduated from high school?

I remember so clearly the frustration on my husband's face when I'd bring up yet another reason we should either hold him back in Kinder in America or let him go into 1st grade. Because of his November birthday, days from California's cut off date between grades, we had to decide if he'd be the oldest kid in his class or the youngest. We went with the former. And in the early years it was very exasperating for his teachers, trying to keep the attention of the kid who was already reading chapter books while the rest of the class was still learning the alphabet. But he turns 18 in a couple of months and that extra year was the best thing we could have given him. It's only in looking back that I can see we clearly made the right decision. Thumbs up to the sleep-deprived me of thirteen years ago!

And thumbs up to all the mamas sending their babies to Kindergarten for the first time this week. Enjoy the wild and beautiful ride you've just buckled into. The rest of us will be waiting here at the exit, lost in memories and trying to figure out exactly how they mysteriously grew up right in front of us, even though we never took our eyes off them for a second.
By Heather Rose-Chase at August 15, 2018 No comments: