Where My Mind Wandered (The Last Two Weeks) 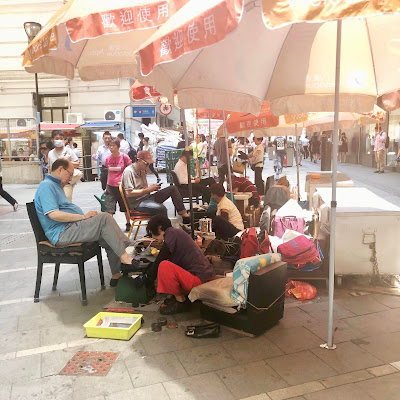 Well that was a little bit of a break, wasn't it? Though I've actually been more busy than these industrious shoe shiners in an alley in Hong Kong during lunch hour. It's exam season for my sons, and there is so much we know now that we wish we'd known at the beginning of the school year. We're doing our best to get through it. Our oldest just completed his AS Level exams, and our youngest is studying like crazy for his GCSE's. More on this later (including what I wish we'd known and how you can be successful should you find yourself enrolling your kids in a British school) when I have a minute to untangle everything in my own mind!

For now I just wanted to pop in with a few things that have been on my mind, in between drilling key terms from Psychology on flashcards for my firstborn...

1. Honestly, I just read this article today, thanks to my Shanghai friend Matt. I have several readers who live in Japan, and a few more getting ready to move there. Tokyo is my favorite place we've lived, and I think part of it is the chaos of a bustling city is managed in both obvious and hidden ways. Check this out, and then tell me if you've got any plans to visit Tokyo soon (we do!).

2. It's Mental Health Awareness month, and I've been looking up prolific artists who were or are known to have mental illness. One of my favorite versions of Lewis Carroll's Alice's Adventures in Wonderland is illustrated by Yayoi Kusama, one of Japan's leading contemporary artists. You may know her from her work with lots of dots. The dots were one way she has dealt with sometimes crippling mental illness. She has lived voluntarily in a mental hospital for nearly five decades, within walking distance of her art studio where she still makes art today at the age of 89. Read more about her art as therapy here.

3. Did you watch the Royal Wedding of Prince Harry and Meghan Markle? Sigh. I definitely did, helped by the fact that it was held at 6:00 p.m. Hong Kong time. As Mama to two boys, I openly wept big tears when William and Harry got out of the car, two motherless brothers, there to see the younger one get married. I love that the newly minted Duchess of Sussex got her own coat of arms, and that so much of it ties into her life in my home state of California.

4. And one more thought about the Royal Wedding... the flowers! I'm named for three flowers (Heather, Queen Anne's Lace, and Roses) and am happy to say that flowers are definitely something I love. The fact that Harry picked some flowers from his mother's private garden to go into Meghan's wedding bouquet was so meaningful! Did you know that every flower has a meaning? Personally I only want to send ranunculus from now on, which mean, "I am dazzled by your charms." More on the language of flowers here.

I'm going to stop there because I can't hear myself think. The flat beneath us has been under construction for nearly two months, and has a permit to continue to do so until July 15th. If you've never been treated to months of jackhammering, drilling, metal banging against metal, and other anxiety-producing sounds so loud that you cannot have a conversation for 6-10 hours a day, it probably means you don't live in Asia. I'm getting up earlier and earlier each morning to try and be productive before the cacophony starts at 9:00 a.m., but this is all such a drag. Looking forward to July 16th as if it were my birthday!