Living in Asia provides so many great lost-in-translation moments. Most of the time I find humor in them, but there's potential for mild horror as well.

Case in point: A few years ago in Macau, one of my sons was quite ill with gastroenteritis. The not-quite-fluent-in-English but very competent doctor asked us when the last time "he made a sheeting" was. I went round and round, echoing his words, trying to figure out what a sheeting was, and how exactly one went around making one. My poor son was moaning and clutching a bag to vomit in, and my mind was spinning trying to think if he'd thrown up anything that looked like a sheet. A sheet of paper? A bed sheet? "A SHEETING," he shouted, thinking that saying it louder would help me understand. And when I finally realized what he meant, I blushed twelve shades of purple and asked if he meant a bowel movement. "Yes," he said, frustrated at my dim ability to understand English. "Aren't you from America? Isn't that where you say make a sheet?" Ai ya!

The funniest moments are when we see a blend of Chinese and English, a made up dialect many call Chinglish. We often wonder if tee-shirt designers simply open a dictionary, point at seven random words, and toss them onto the screen printer, or if they just liked the particular aesthetic of those letters, in that order.

Shanghai hosted the World Expo in 2010, and the heftily named Municipal Bureau of Quality and Technical Supervision decided to crack down on the Chinglish, asking representatives from twelve different industries to do a better job with translations, so as not to create embarrassment while the world's spotlight was aimed at China.

I can gleefully report that even in 2018 there are plenty of examples of Chinglish in China to be had, we're in no risk of losing endless opportunities to giggle over inappropriate, random, or bad translations found everywhere from clothing to store names to food on a menu. But in Hong Kong... well, there's less of it.

Hong Kong was a British Colony for 156 years, up until 1997. The current Basic Law here states both English and Chinese are official languages. (Fun fact: English was the only official language up until 1974.) But having English as an official language doesn't mean it's the most commonly used one. The 2011 Census found the Cantonese dialect of Chinese to be the primary spoken language in 87.5% of the homes in Hong Kong. With an influx of migrants coming from Mainland China and Taiwan, the use of the Mandarin dialect of Chinese is also increasing. (Side note: my sons speak Mandarin, and are very grateful that its use is increasing here so they can continue to study and speak it!).

Despite the large use of Chinese, I think Hong Kong probably has better copywriters, making sure less troublesome translations get out in front of the public. But despite a dearth of Chinglish, I'm still finding fun things which make me giggle. I love to laugh more than anything, so I'm grateful for any opportunity for a good chuckle! Wanna laugh with me? Come along for a walk through Hong Kong this past week!

Are you hungry? How about some Bone-in Chicken Sausages! 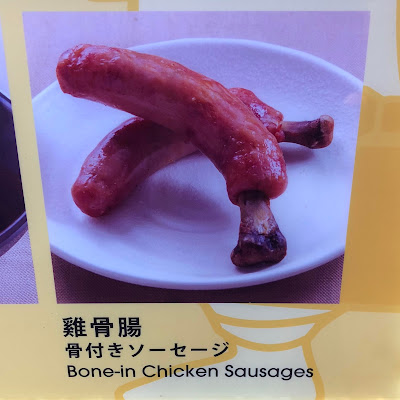 I found this at a quick service restaurant in the Macau Ferry Terminal on Hong Kong Island. It's a port of entry/exit for people coming from Macau and across the border in Mainland China, so many of the things on offer are meant to appeal to a wide variety of guests. The second line of language in the image is Japanese, which makes me wonder where this particular delicacy comes from, or who they are trying to fool with a hot dog that's been stuffed with a burnt chicken bone...

Surely after that great meal, you've worked up some thirst? Why not sample Starbucks' latest Spring offering, the Iced Butterfly Pea Lemonade Coffee! 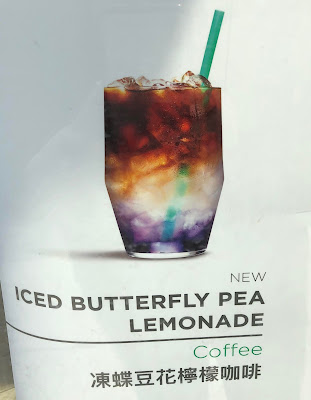 Honestly, I have no idea who the target market is for this. It's a blend of a type of iced tea made from the Butterfly Pea Plant, native to Thailand and Malaysia, plus lemonade and coffee. To me, it looks vaguely poisonous, not at all appealing. When I questioned my local barista, she said she hadn't yet sold any, and doesn't personally drink iced coffee of any flavor. This beverage is currently also available in Taiwan, and my friend there said he thought it was okay... a blend of sweet tea, tart lemon, and bitter coffee. Considering Starbucks in Hong Kong is more expensive than Starbucks in America, I saved my eight bucks to spend on my usual only-sweet, never tart or bitter, Caramel Frappucino. Yeah, boring I know. But if you want to hop a flight to Hong Kong this week, I will treat you to one if you promise to drink it all...


Next stop after a meal and beverage is generally the bathroom. 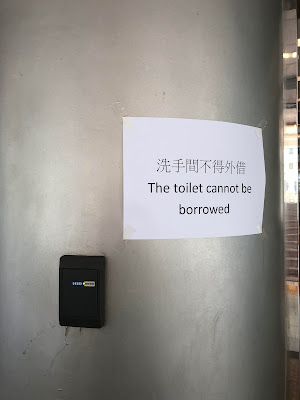 I confess the use of toilet in the sign above is less funny to me than the borrow part. The term for 'place where one goes to relieve oneself' varies widely around the world, but we've used the term 'toilet' for about seven years thanks to the influence of British English vs American English in this part of the world. If you ask where the bathroom or restroom is while in a fancy shopping mall, you may get a blank stare. However, when I'm in America and I ask where the toilet is, I generally get the cheeky answer of 'in the restroom, of course.' So I'm guessing the sign above means there is no public facility to use on the premises, that it's for staff or private use only. But when I snapped a photo and sent it to our extended (American) family group chat, we all had a pretty big laugh. I mean, I don't want to keep the toilet, just borrow it for a day or two...

This one I cannot explain. 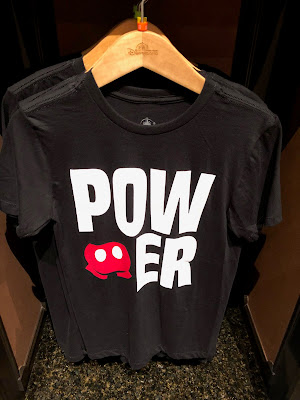 And it's not from some random clothing stand on the corner. This is from Hong Kong Disneyland. Power Pants? Power Shorts? Pow-Pants-Er? Power Bum? Even the Cast Member in the store could not assist me in providing a meaning behind the graphic... What do you think it means? And more importantly: would you wear it?

Avengers: Infinity War opened on Wednesday in Hong Kong, and we're seeing crazy amounts of advertising all over town. And of course different elements and characters from the Avengers are appearing at Hong Kong Disneyland, including Cosmo, the telepathic Soviet Spacedog. He's behind glass and he moves and blinks and makes noise. I took this photo and then started laughing like crazy, which made the guests standing around me stare. 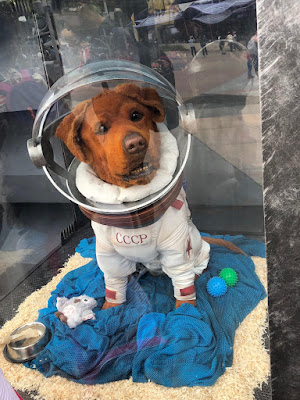 Let me show you another angle... Do you see the blue and green spiky balls by his side? Do you know what they are? 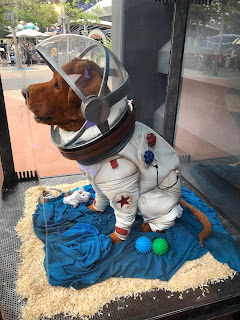 Did you guess Dryer Balls? They are meant to be used in a big American clothes dryer. Which is neither widely available, nor popular here (there's no space and they use a lot of energy!). Most people do not have machine dryers at all, preferring to hang everything to dry. I have a combination machine which first washes a (tiny) load of laundry, and then heats up and spins very rapidly to dry it, sucking out the water. One load of about 4-5 pieces of clothing can take five hours to wash and dry, and because it goes straight from washing into rapid spin drying, a Dryer Ball isn't at all useful.

I do miss having a big, gentle, tumble dryer, which left our clothes feeling soft and fluffy instead of the heating, spinning machine which leaves everything stiff and wrinkled and in need of ironing. Dryer Balls were great at cutting down drying time and keeping our towels lofty. I wonder how these managed to find their way into Cosmo's cage? I'm sure they look fun and exotic to most everyone here who sees them, but I can't stop laughing about them!

That's it for right now. I'll leave you with this final photo of an awesome granny I saw strolling around Hong Kong Disneyland. It's not exactly funny (unless you think the big lips mean saying yes to kissing adventures), but it's a great reminder in this new season of life in Hong Kong! 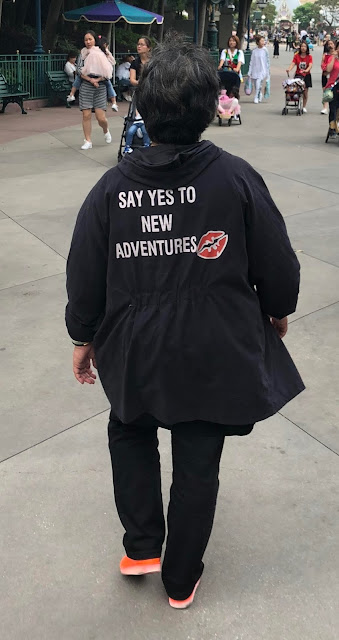