Back in Hong Kong...

...and struggling with jet lag!

I’m doing everything right, including not relying on caffeine to keep me awake in the afternoon, spending lots of time outdoors, and trying to get right back into the ideal routine of waking, sleeping, and eating. But I’ll tell you now, this is probably the worst jet lag I’ve had. In a week I travelled across four different time zones, and had no set routine, so my body is very confused. I woke up this morning at 4:00 a.m. with my stomach rumbling with hunger, and all I wanted to eat was a steak with cheesy garlic mashed potatoes. Which is odd, as my regular diet is primarily plant-based! I’m hoping tomorrow is better than today!

Yesterday I went to Hong Kong Disneyland to meet up with a friend who kindly ordered me coffee capsules in Germany and then hand carried them from London to Hong Kong. Our machine was purchased in Shanghai, but the capsules are no longer made anywhere except Germany, and they don’t ship to me! Thankfully I have a few friends who fly regularly from Europe to Asia, so we’ll see how long we can manage this system before we have to figure something else out...

But it was nice to head straight to Hong Kong Disneyland right after I returned as it gave me a chance to catch the newly spruced up Festival of the Lion King show. It’s an opening day attraction, running continuously since September 12, 2005. Now it looks sparkly and new and even has some new cast members. If it’s been awhile since you’ve seen it, or if you haven’t caught it yet, now’s the time! 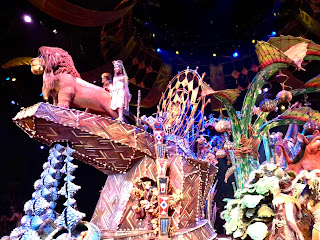 I’ll be sharing more about my trip to America soon! I discovered so much about a part of America I’ve never lived in before, and only travelled briefly to previously, the American South! It made me realize America is a vast and diverse place, something I knew in my head, of course, but have very little experience in seeing with my own eyes.

Do you have any tried and true jet lag remedies? I wonder if it’s something that gets worse as we age? Hmmm... new subject to research!
By Heather Rose-Chase at April 18, 2018