The Raft or The Kayak 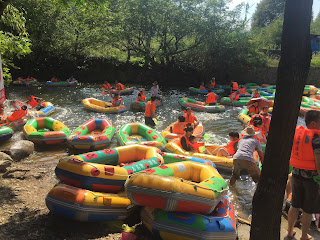 My sons currently attend a British-curriculum school in Hong Kong. Previously they attended a local Chinese school in Shanghai. There's a million ways I could compare and contrast their experiences, but the one which is pounding us in the face right now is the difference between the group and the individual.

In America there was a law called "No Child Left Behind" in place from 2002-2015. It was a way to hold the schools accountable for the achievement of their students, as well as an opportunity to level the playing field for students from disadvantaged backgrounds. While the program struggled and has been replaced with something else, the idea of not leaving any student behind is a noble one. In Shanghai, the boys' school really seemed to do this well.

While we lived in China they attended boarding school. They were with their classmates all day and night, with only a break on the weekends to come home and do laundry and eat a week's worth of pizza. Their classes weren't grouped together based on age so much as ability. For instance, my youngest was in the American equivalent of the seventh grade, but he was in a ninth grade math class because that was the level which fit him best (even though it jumped him from junior high into high school). And unlike our experience in America, the students were actually expected to confer with a classmate first before asking the teacher a question. If you didn't understand something, the entire class was expected to help you out and make sure you got it. Working together was the way you were successful, not isolated studying for individual glory. 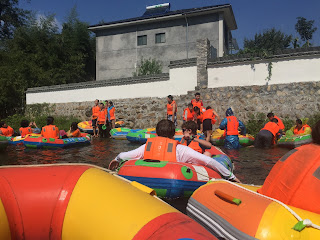 The experience was similar to being on a big raft on a river. The water may be flowing quickly, but the large raft filled with people was a pretty safe place. You would all leave from the same spot on the shore and arrive at the destination together.

This style of schooling took a little while for my sons to get used to. Heck, it was hard for us parents because our own upbringing said the teacher was your first point of contact if you were struggling, not one of the last. And you never let your peers know if you were slipping, how would that look? But the benefit really was that no child got left behind. You could use your individual strengths to contribute to the success of the whole group, while one of your classmates used their strengths to help you out. The whole group got the ice cream party at the end of term, not just an individual who did particularly well. And because it was a boarding school (and in China with no uncensored internet, wifi, or distractions), you had plenty of both programmed and casual time to work as a team. 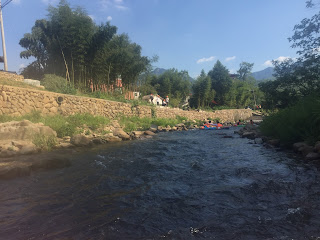 In Hong Kong, they go to a day school right down the hill from our home. I assure you the transition from boarding school to having our kids home each night was far more difficult than when they went away. After so much relative freedom from their parents, it was hard to reassert boundaries or even ask questions about homework without great suspicion on their end. And it was also hard simply remembering to ask if they had homework after so many years of not being involved in that part of their lives!

There was also a vocabulary difference. We'd ask if they had homework, and for months the answer was no. I found this to be shocking! After all, they are in the American equivalent of the ninth and eleventh grades... how could there be no homework in high school? Turns out the word for "work you do at home after the school day is complete" is revision. I'd been hearing the word at the school, but assumed it meant altering, or improving something which has already been done. As in to revise an essay in a second draft (thanks Merriam-Webster American Dictionary). But according to the British Cambridge Dictionary, it means 'study of work to prepare for an exam.' Isn't it funny how two native English speakers from different parts of the world can actually be speaking a completely different language? While there was no specific assigned task to complete each night to turn in the next day, the boys were meant to be studying at home every evening for each class they had (they knew this, they were somewhat taking advantage of their parents' ignorance on terminology).

The programs they are in here (IGCSE for our youngest and A Levels for our oldest) have huge exams at the end of two years which cover everything they previously learned. The coursework they are doing during this time doesn't count toward completion, it's passing the exams at the end which matters. Revision is how they are meant to keep the details fresh. Ten minutes every day per subject vs. three days of cramming before an exam, which covers everything you learned 18 months before. Of course, being new to this, it took us awhile to truly grasp the enormity of this system.

Here we are, six months into the school year and figuring out there is no raft for our kids to sit on as they speed down the river toward major exams at the end of next year. If anything, they've been standing in the middle of the river, getting pummeled by the water and trying not to drown. Right now we're doing our best to at least get them into a kayak and teach them how to paddle for themselves. What it means to actually study, not just doing repetitive classwork or a project. It's not an easy place to be when you're 14 and 17, and have no real recollection of doing school any other way. How do you teach someone to study when the majority of their school life is already behind them? 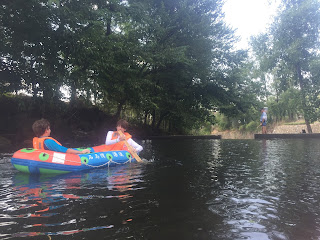 Hong Kong, especially the area where we currently live, is not an exceptionally transient place. Many of the boys' friends were actually born here, and have attended school together their whole lives. Our youngest was the sole new student in his year, and our oldest was among only a handful of new students for year twelve (the equivalent of 11th grade in America). Their peers and friends have come from several years of practice in what is brand new to my boys. And because neither of them have ever been in a system where everything is riding on a huge exam so far off in the distance, they don't know what to expect or how best to train for that scenario. And for our oldest, with just one more year of school, he doesn't even get a chance to try it out in an earlier grade before he gets to do it for the first and only (and most important) time. The boys aren't the only ones standing in the river unsure what to do, us parents are wet and shivering as lost as well.

The good news? The teachers here are incredible. If you take one step toward them, they are more than happy to cover the rest of the difference. But transitioning from a system where the teacher was not the first stop on a bumpy patch of road, to the people my sons need to be talking to and updating and asking questions of on a daily basis is just as rough as when we left this type of school!


Yeah, if this sounds like a pep talk to myself as we prepare to sit down with all our oldest son's teachers this afternoon to get the honest truth of how he's doing, it's because it 100% is. Everyone I've spoken to about my fears says it'll all work out just fine in the end. And sure, that's probably true, even if it's not at all a helpful statement to make while someone is currently hyperventilating. I still want to put this part of our experience down in words and share from an authentic place that isn't always sunshine-filled days and trips to Disneyland.

I want to record this season in a thoughtful and meaningful way. It's not just the end of the story that matters, that place where the moral and wisdom magically drop from the sky and you move on to the next great adventure. It's really the muddled middle, where you truly don't know what might be coming around the corner, that serves to give the ending the sweetness, the satisfaction, the goosebumps, or the tears which make a story memorable.

Here's to the middle, this not-quite-to-the-end season, and to our future, stronger, drier selves. 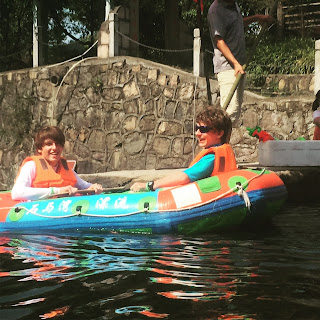 *All photos courtesy of my husband, who took the boys on a rafting trip in Anhui, China during the summer of 2016. All three of them loved it. Good reminder that ultimately, being in the water at all is a super fun place to be. Especially with family and friends by your side.
By Heather Rose-Chase at March 21, 2018