Ode to a Shanghai Sofa

When my Mama was growing up, the walls in her home were a riot of noisy color. Mustard yellow, avocado green, deep crimson. And though my Mama is an artist, she found the colors to be dark and oppressive. She dreamt of a quiet, peaceful home with pale white walls where her furniture and art could be the focus.

When I was growing up, the walls in my home were white. White, white, white, every room, every wall. My little brother and I wore my Mama down when we were in the 4th and 5th grades, and my brother got one wall painted the palest of blue in his room, and I got the palest of creamy yellow painted on a single wall in mine. It was barely satisfying though... I daydreamed of a home with walls dressed in a riot of noisy color.

At age 18 I moved from the family home into a tiny bachelor apartment, and then got married at 21. In our almost 21 years of marriage, we have never yet owned our own home. Which means I've lived the entirety of my adult life with Rental White walls. Somehow I ended up living my Mama's childhood dream, while she got mine. We always want what we can't have.

I have lived in Asia eight years cumulatively. The thing about living in Asia as an expat- most places come furnished. And it's very common to find that the owner of the home you rent does not make the same choices with furnishing their property that you might make, especially if you were raised in a Western country (even my own raised-in-Asia children have very different taste from me, theirs is firmly based in a Chinese aesthetic). But like they say in Kindergarten: you get what you get and you don't throw a fit. And there is a certain level of freedom which comes from not owning furniture, and a free lesson in creativity in trying to make someone else's stuff look like home while you live with it.

Our last flat in Shanghai was the closest to what I like, lots of bright green and purple furniture instead of the usual red and metallic gold that much of Shanghai's, Macau's, and Hong Kong's landlords have embraced. The walls even had a little color, pale lavender in the common areas and medium yellow in the bedrooms.

A fellow expat friend of mine went and designed and had some furniture made to order here in Shanghai, and when she abruptly repatriated, she had to sell off a lot of it. I was so happy to take her little sofa and four purple chairs, because the color scheme perfectly fit with our living room, already home to a large purple sofa (owned by the landlord) and a big green rug (also owned by the landlord) which looked great with the little sofa. And it was really unique, not something you could ever walk into a store here in Shanghai to buy. 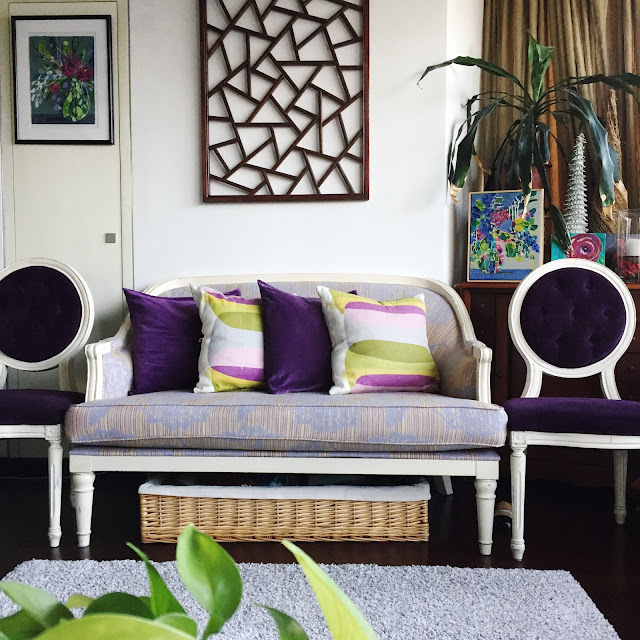 It made our landlord mad. He truly despised it. Whenever he'd come over to check out something in the flat, he'd remark on how ugly it was and ask us if we wanted him to buy something nicer to replace it. In more recent visits he'd gasp and ask why we still had it and when we planned to get rid of it. "Drag it to the curb, someone will take it with the garbage," he say, pained expression on his face. That somehow just made me love it more. We also always love what people don't want us to have, and that little sofa, unlike everything else in our home, was mine all mine.

It was my oldest son Nathan's favorite place to sit. Far too short to contain all of his 6'+ body, our part-octopus boy would somehow wind up all his legs and arms and make himself comfortable for movie night. It was very deep, perfect to curl your feet under your legs with a good book.

A year ago we moved from our flat in Lujiazui, the area of Shanghai with all the highest of high rises, to the suburban Century Park area of Pudong. Our new flat was a study in red and metallic gold, and it caused me pain to think about making peace with a garish red brocade couch set with gold lame' trim, along with textured faux gold paint on every piece of furniture. But the location was great and the price was more than right and we negotiated with the owner to remove the furniture so we could bring in our own. Which, on the day we signed the lease consisted of that small sofa and four purple chairs.

I would have loved to be like my friend and have designed some furniture for the new flat and then have it made, but when we moved, my husband was in the middle of opening Disney's newest theme park and I was about to go live in Suzhou for a few weeks to produce an arts camp for teenagers, and having a place to sit down wasn't something we could delay. So we made a trip to my happy place, IKEA, and came home with a large neutral sofa and a large neutral rug and a dining room table to put those bright purple chairs around. My husband was surprised at the sedate choices, but I still hoped to paint our walls something bright and cheerful, which the new landlord agreed to as long as we painted it back to rental white before we moved out. Suddenly our lightweight expat freedom got a little heavier, and I got a little grumpier, no one eat on this couch we own it! No juice on the carpet we own it! Don't drag things across the table we own it! But my favorite was still the little sofa. We owned it, but it somehow felt more like home because it was different from anything you'll ever find in IKEA or any other Shanghai flat. Plus, it had already lived in someone else's home and the shabby chic style was meant to look lived in.

Now here we are, a year later, moving to Hong Kong. We never did have an opportunity to paint our walls something noisy and wild, probably a good thing since we have no time right now to paint them back to Rental White before we leave less than 30 days from now. We went to Hong Kong a couple weeks ago to apply to schools for the boys and look at apartments and figure some things out. One thing we realized right away: we're going to be living in a flat half the size of the apartment we currently live in, and we'll be paying twice as much in rent. Our budget simply won't allow us to go any bigger in one of the most expensive real estate markets on this entire planet. Hard decisions had to be made, and one of the first was finding a new home for the little sofa and the four purple chairs. They take up a lot of space that we simply won't have. Too small to be the sole seating furniture, too big to be the extras.

I listed them for sale on a local buy/sell/swap group and within minutes there were takers lining up for all the pieces. Sadly, they've been separated, as the person who immediately claimed the sofa waffled on the chairs and someone else swooped in with cash. But that's okay. It just means they'll go on to bring color and joy to two other families living the expat life in rented, furnished apartments hoping to put a little of their own personality in a space that isn't their own.

My son Nathan helped us load the little sofa into our elevator and take it down to the lobby to meet the person taking it. Nat was a little bereft at losing his favorite spot. I know how he feels. Living this global nomadic life means we don't have one place that will forever be home, so home ends up being mostly people, along with little pieces of this and that which stay consistent while everything else changes. We had that little sofa for nearly five years, a lifetime in our family. We all took a moment to consider the truth in that, and I felt like I needed to write it out as a way to release it instead of changing my mind and refusing to sell it and then ending up with an overstuffed home in Hong Kong and growing to resent the thing that used to bring me so much joy, or worse... ending up having to drag it out to a curb there with the garbage because we just can't keep it. I also think the little sofa is a bit of a metaphor for this city we are leaving. It may seem like just a little sofa, and it may seem like five years in one city is such a small unit of time. But from the time I moved out of the family home in 1993, I've never before been in one place for five years. In fact, only once in my life did I ever get beyond five years, and that was the house my brand new parents brought their firstborn baby girl home to on my very first Christmas. Five years, to me, is quite a wild accomplishment.

I'm excited for what's next, really and truly filled with joy over the future for all four of us (and hope springs eternal for a future with walls which are a riot of noisy color in our new home). But I also have space inside me for the bit of sorrow which comes when you say goodbye to something you will never get back. It's true, we are moving back to Hong Kong, a place we lived before, so I know it's absolutely possible that at some point in the future we'll end up moving back to Shanghai too. Never say never, right? But just like Hong Kong isn't the same now as it was back then, Shanghai won't be the same either. And I know I certainly won't be the same.

Thank you, little sofa. And thank you, big Shanghai. You will both be missed.