This festive greeting was over four years in the making! 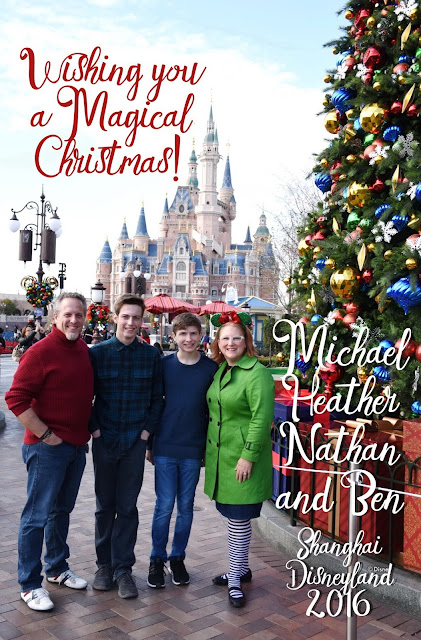 Christmas cards are a big deal for me. Though we move a lot, our annual Christmas card is one way I can keep in touch with people all over the world that I don't get to see very often. We do one every year, and it occupies my thoughts throughout the year as we travel or have big family moments. Instead of a thousand words, I try to figure out what photo can tell the story of our family's year.

We moved to Shanghai, China from Macau in spring of 2012 when my husband took on a project opening Disney's newest theme park, Shanghai Disneyland. The minute he signed his contract, I had a vision of this Christmas card. Each year as an opening date was not yet announced, I'd think, "Okay, maybe next year will be our Shanghai Disneyland Christmas Card!" When they finally announced the opening date of June 16, 2016, I knew the card I'd been waiting for was finally going to happen. Christmas card in mind, we took this family photo in front of the Enchanted Storybook Castle on the first day of trial operations in May this year (it was Mother's Day, and almost exactly four years from the date we arrived in Shanghai): 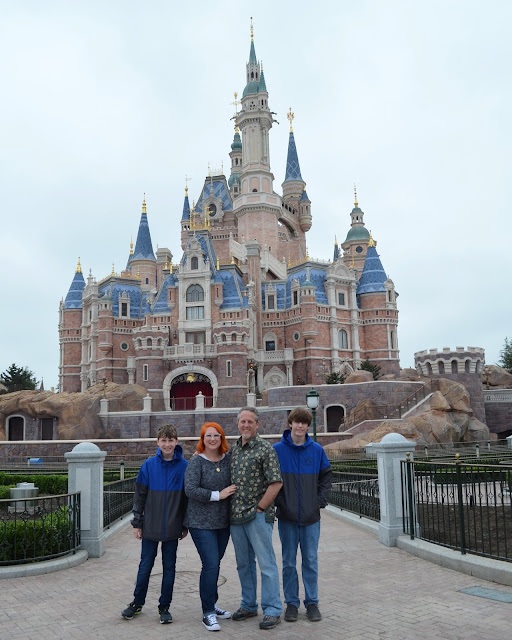 I honestly thought this would be our Christmas card for this year! I mean, the last time we took a Castle photo without a single other person in the photo was the first day of Cast Member previews for Hong Kong Disneyland in 2005! 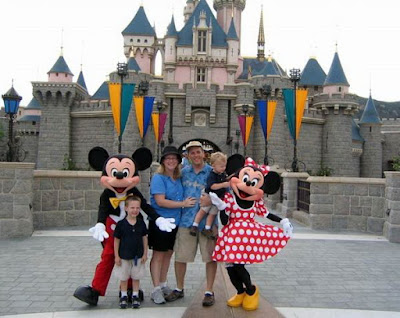 Unless you're taking a photo outside the normal operating hours, this just doesn't happen!

But as Christmas drew closer and the Shanghai Disneyland Resort decorated for the holidays, the idea of taking a new photo with some extra Christmas Magic became my goal. Also, if you look at the photo from May and compare it to the photo from December, you'll see two other big changes, my baby boy Benjamin is now taller than I am, and my firstborn son Nathan is now taller than his Dad! A lot can happen in seven months! So we did some quick consultations with the calendar and went to Shanghai Disneyland on Saturday December 3rd and took about 25 photos... Shanghai is consistently overcast, between the humidity and the pollution, we generally always have a nice filter action happening naturally. But on that day, we had bright blue skies and lots of harsh sunshine and massive amounts of shadows. Example: 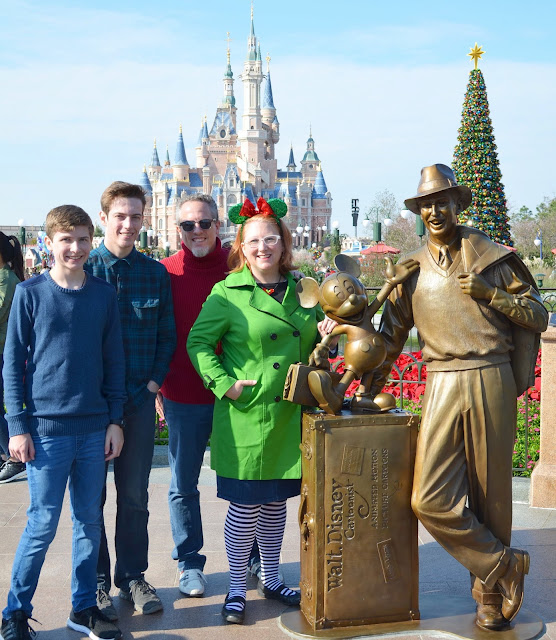 I'd brought my big camera and was utilizing every one of the Disney Photopass Cast Members to get the shot I had envisioned, but the language barrier proved to be too much and I couldn't get my idea across (plus, there was a line of people waiting to take selfies next to the Christmas tree). I was trying to be happy with the photos we took, but the combo of not having had a cup of coffee that morning, the harsh winter sunlight (which normally would be a GIFT), and the boys just wanting to please-Mom-can-we-just-be-done-and-go-on-Pirates made me feel grumpy and sad, though I tried to mask it. My husband of 20 years realized I was faking the happiness and halted our hike to go on Pirates to get me some coffee at Remy's Cafe on Mickey Ave. We also had some gingerbread cookies. 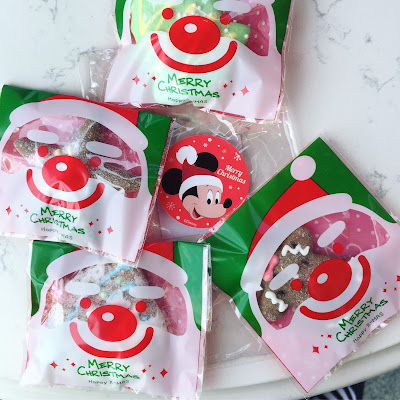 A little bit of festive sugar, a little bit of caffeine, and my outlook changed dramatically. Also, a bit of real Christmas Magic happened and a gentle-but-chilly breeze blew a soft and fluffy cloud in between the sun and our faces, erasing the harsh shadows, and we marched right back to the one spot in the Park where you can get the giant Christmas tree and the Castle (and a few Mickey wreaths for good measure) and had the Disney Photopass Cast Member take just one more photo. And we finally had a winner, the Shanghai Disneyland Christmas card photo I'd hoped for over four years ago! 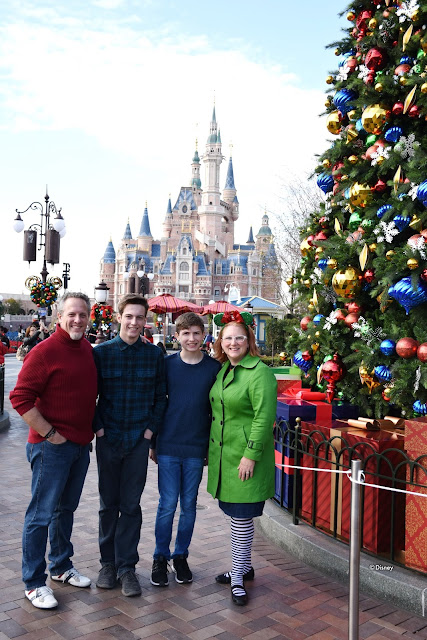 I was so happy that I didn't even have to fake the Christmas joy I felt in the photo Michael took of me moments later: 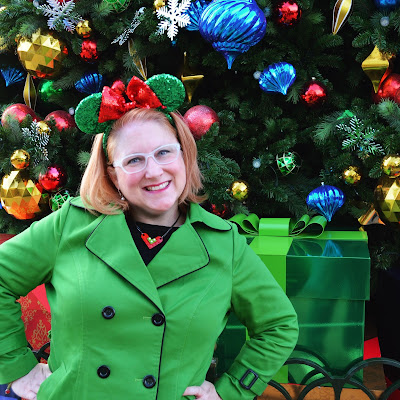 Then we went on Pirates (no waiting to get on!), and I changed out of my skirt and stripey Alice in Wonderland tights into jeans so we could ride on Tron twice, which you have to straddle like a motorcycle (but remove your Mouse Ears):

And later in the evening we went to meet Mickey Mouse, which I'm always, always, always in the mood for and never fails to leave me giggly and excited: 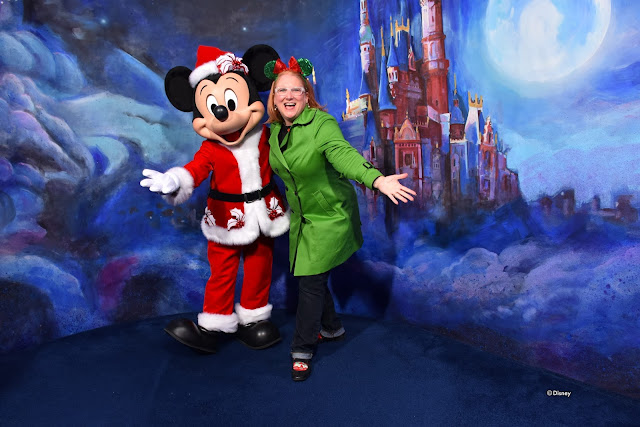 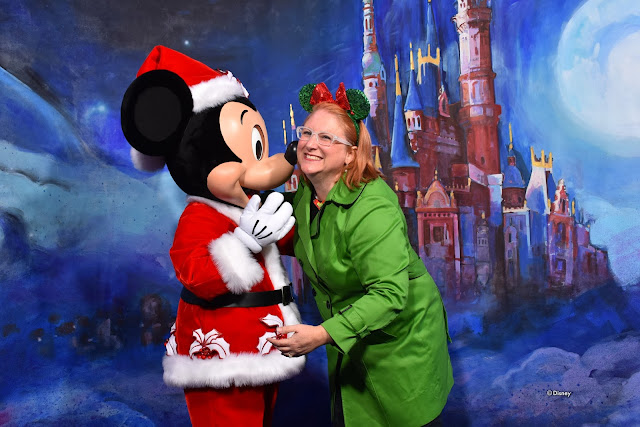 But a certain first-born teenage boy is less than thrilled with: 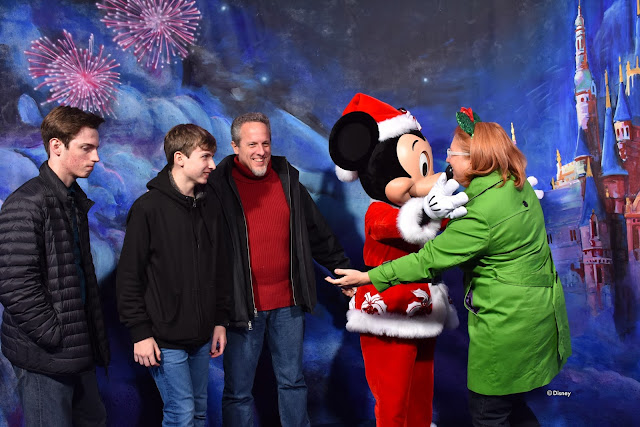 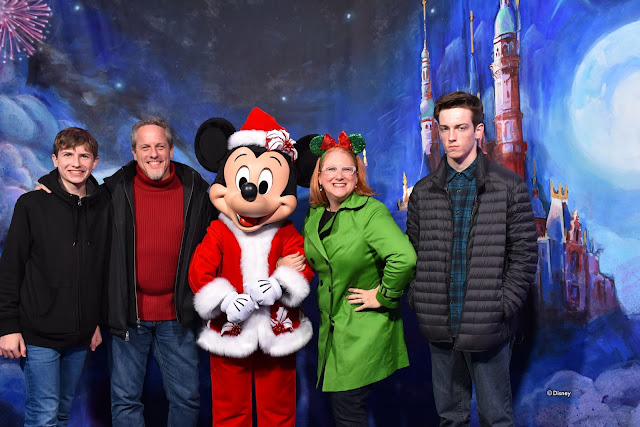 I can't stop laughing when I look at these photos! But he smiled for the photo that counted, so I'm happy. This one (on another day in smoggy early November before the Christmas decorations came out) also makes me laugh: 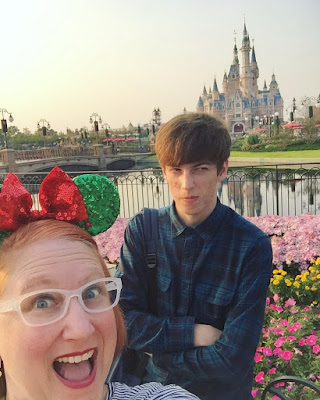 I'm overwhelmingly grateful that unlike our experiences with Tokyo DisneySea and Hong Kong Disneyland where we repatriated to America on the days they opened, we've been able to stay after Grand Opening and experience this new theme park as the seasons change. Up next is Chinese New Year!

Merry Christmas, from my family to yours! 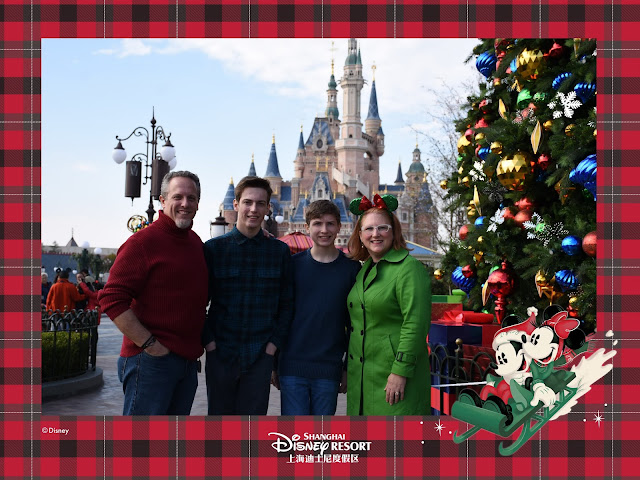