Things I could feel bad about. But won't.

Michael and I got to jump on a plane from Shanghai to Los Angeles to attend a four day conference on leadership, creativity, and humanity two weeks ago. It was something we really wanted to do, but the limitations to our finances living here in Shanghai mean that we can budget a trip to America only every other year, and this was not our year. But in the beautiful way that things sometimes have a way of working out when you are absolutely meant to be somewhere, someone else totally unrelated to the conference provided the funds via an envelope filled with cash to cover the cost of round trip airfare and the conference admission. The conference was amazing. So much good stuff that I'm still mulling it over and trying to find ways to adjust my life to fit all the new information we were flooded with. But this isn't a post about the conference. I don't even know how to write about it just yet. In addition to the four conference days, we decided to stay an extra three days in Los Angeles, one for Michael to have work-related meetings in Glendale, one for us to go to Disneyland, and one for us to do some shopping.

One thing I didn't know about myself until I moved abroad: I hate shopping. I grew up hitting outlets and thrift/resale shops long before that was a cool thing, digging through rack after rack to find a gem or a bargain. But living in China there is so little emphasis placed on what you wear (I do not exaggerate when I say I see people, grown people, in pajamas, each and every day). Plus, I'm just getting older and caring so much less about what people think. Between the two, I have lost any desire to spend hours finding just the right thing to look cute. I know I've said this before somewhere, but my curvy body doesn't necessarily lend itself to finding something off the rack here in Shanghai, land of slim and slender people of China. At this point in my life, I want to look covered (in something black, preferably) and feel comfortable. And I don't want to spend two hours in a dressing room trying to find something that'll work.

One trick I've found as an expat was to head to some of my favorite online retailers and buy things to be sent to my in laws house just ahead of our visit. Then I can take my time trying things on and sorting them into piles to keep or to return to the retail storefront (it's not because I'm such a hardcore fan of Old Navy that most of our clothes are from there, it's all about the ease of returning stuff!). But a tricky thing to cope with and work around is sizing. In China, if I buy something, I'm likely to be a size XXXXXL. As in 5XL. So I look at the sizes on the websites in America and think that I at least better buy a size XL because surely anything smaller would be way too tiny. But then I try it on and see how baggy it is and it just blows my mind that I can actually fit in something that doesn't have an "X" on it at all. Seriously.

But then there's also variations due to style and personal preference. My preference will always be baggy over tight, but there's a difference between baggy and hanging off the shoulders or cinching a belt just to make something stay above your curvy hips. When we left America over five years ago, bootcut jeans were still in fashion, and jeggings weren't yet a word. Then the skinny jean phase hit. Now we are apparently in a sort of a culotte phase, or at least a sort of straight leg jeans era instead of the super skinny jeans. Here's what I know about my body: my weight has barely fluctuated since we left America. I lost a little weight after the hysterectomy, but even so, my waist has become thicker and my face rounder as I entered medical menopause (yay me). My hip and chest sizes haven't changed at all. And I still wear the same size jeans today that I did six years ago, even though living here in China makes me feel like surely I'm a lot bigger than I used to be. I'm not... I'm just surrounded by people who are a lot smaller than I am. So even when I bought skinny jeans in the last few years because that was the style, my normal size fit. But I sized up because of preference. My abdomen is criss-crossed with scars from various surgeries and I hate anything tight there at all. When the straight leg style became available again, I bought the size up and realized it was way too baggy and ill-fitted. So I went back down to my normal, pre-China, pre-jegging/skinny jean size.

For this last super quick trip to America, I wanted to get a few pairs of pants to replace two pairs that died a death of being worn out last winter. So I bought my usual size, resisting the urge to buy up a size, and had them shipped to my mother in law's house. When we visited her, I went and tried everything on and found almost everything fit just fine. Except in one area. One truly shocking area. And it was not my waist, which I confess has gone up nearly 3 inches since the hysterectomy/medical menopause. It was not my curvy hips or my sprinter's thighs or my round-from-sitting-too-much derriere. It was my big, bodacious calves! I was shocked to find that nearly every pair of pants I'd bought were stretched incredibly tight across my lower legs. They weren't even snug in the waist or hips, but the calves were begging for mercy. This wasn't just one pair either, it was three... in different styles and fabrics and brands.

I packaged them back up to return them to whence they came, and thought a lot about my calves. Actually, I had a lot of negative thoughts about my calves, a part of my body I'd not really ever considered before. I mean, we're taught to stress about our belly and our hips and our breasts and our upper arms from a pretty young age. But nobody mocks someone's big calves on the schoolyard or puts "How to have tiny calves by summer!" on the cover of one of those cursed beauty magazines which love to highlight flaws.

My calves are extremely muscular. While the rest of me has some gentle padding (thicker in some places than others), my calves are pretty ripped. Seriously, if you were here right now, I'd flex one and make you feel it. And yet there I was, feeling rotten about about the one part of me that's arguably pretty darned awesome. I mean, my summer staple clothing item (whether in fashion or not) is capri-length pants. Because they cover my large sprinter's thighs and highlight my sweet calves and tiny ankles (thanks Mom for the tiny ankles!). So why was that a bad thing? I tried to let it go, and when we returned the pants I did search around and find some that fit and didn't make my calves bulge like the Hulk.

However, calves have been on my brain since our return to Shanghai. I've noticed just how many flights of stairs I climb in an average day here, and it's a lot. Most of the Metro stations only have escalators either going up or down, not both, and sometimes not at all, so you can't get away from stairs. And because I'm suddenly paying attention, I've noticed that climbing a flight of stairs really engages my calf muscles. What does 5+ years of daily stair climbing do to a body? I mean, I wish it did more, but I'll take this. I could feel really bad right now about having what are apparently freakishly large calves by American beauty standards. But I'm not going to. Really, I'm not. I'm just going to say way to go, you beautiful and strong body! You really keep us going places! And I'll leave it at that.

I mean... I have enough other things to feel bad about when I scrutinize myself thankyouverymuch. Like my eyebrows... I was chatting with two girlfriends while in L.A. who complain of wild and unruly eyebrows that they have to pay someone to wrangle into submission. Another girlfriend here in Shanghai just asked me to go along with her to some local salon that only does brows, asking if she should book the appointment for two or just one. Ha! Me? The few hairs on my face that have bravely gathered together to make up my eyebrows are completely translucent and extremely sparse. Efforts to use any kind of eyebrow pencil or powder to make them pop, even by my favorite professional make up artist, make me feel like a clown. So I just wear glasses which draw attention to the frames, instead of wearing contacts which would put the 13.5 hairs that make up my brows front and center. Yes, I do think about this more than I should. And yes, I do feel bad about it. And indeed, brows are things discussed on the cover of those cursed beauty magazines which love to highlight flaws. And I hope that if you know me in real life you won't start staring at the space above my eyes, slight tilt to your head, wheels turning as you ponder how someone survives with so small a brow. Awkward. Instead, can I suggest a friendly, "Hey gorgeous!" I promise I'll return the favor. Because wow, have you seen yourself today? Your beautiful and strong body is really taking you places! Go you! 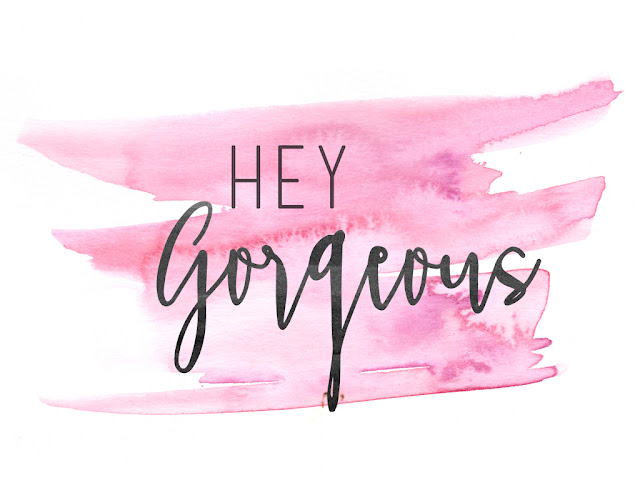