I can't remember when I first discovered singer/songwriter MIKA. I just know his music makes me happy. His Popular Song with Ariana Grande, which borrows the hook from the song Popular in the Broadway musical Wicked, is very addicting. I have the video on my phone, and when I need a quick pick me up, I watch it and laugh at the tale of revenge (and want Ariana's dress at the end).

But the song of his which has particularly resonated for me while we've lived here in Shanghai is Celebrate. In the past (rough) year, I've scribbled "It will be OK" all over the place, including on the front of my journal (which I would never rip up the way MIKA rips up his in the music video below), a line from this song.

I love his videos. They are all so creative and energetic, and everything I've read and heard says that his live performances are the same. But we live in Shanghai, China, where many BIG commercial groups come through, but not so many smaller international groups. At least not smaller international groups I've heard of or want to see. Regardless, MIKA has been on my live performance wish list for quite some time, definitely since before we lived in Asia this last time around.

At some point late last year I got an email saying MIKA was playing in Shenzhen, which is in southern China. We did fly down to Hong Kong to see Star Wars, but that was something the whole family wanted to do, and it was our Christmas gift to each other this year. I sighed and thought, "so close." And then yesterday this image came through my spammy email: 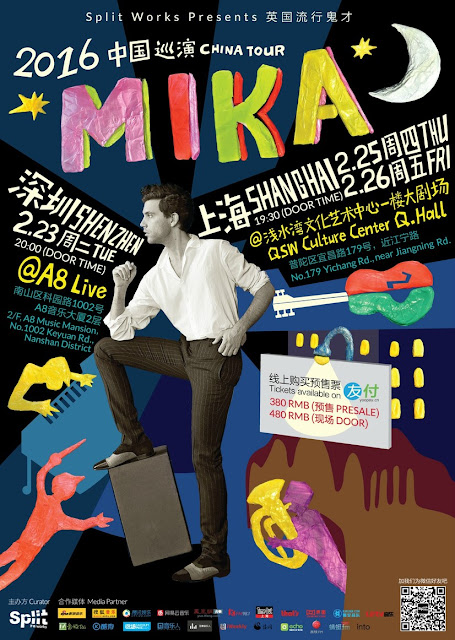 Did I buy tickets for Shanghai less than two minutes after seeing it? Why yes I did. And I'm so excited. I've been playing his new album, No Place in Heaven, all morning. Good stuff. There's some really great things about being an expat, living abroad. But sometimes we don't get access to things we would if we were living back in Los Angeles, where we were spoiled for entertainment choices every single night of the week. We only get 20-something foreign films in movie theaters a year here (which is why Star Wars didn't come to China until January 2016, China had already hit it's quota for foreign films in 2015). So when we do get any musical act, musical, theatrical or dance production come through which looks even remotely interesting, we go see it. If enough shows sell out, more artists and performing groups may feel encouraged to come to Shanghai. Win-win for all of us.

If you're in Shanghai and want to see MIKA, tickets are available for Thursday February 25 (Friday is sold out! Hooray!) by clicking on this link. Hope to see you there!