China is the land of fakes, knock-offs, and copies. There are a million places you can search to find articles and stories about this (start here, here, or here). I've found that you absolutely get what you pay for. Your Ambercromble & Filch sandals for $3 will fall apart, and likely at the most inopportune time. But then again, I have a Faux-lex Rolex watch purchased in 2005 in Hong Kong which still keeps time...

For the most part, I avoid the fakes, because I don't particularly like shopping and the places where you would go to buy the fakes require you to haggle and bargain, which takes me from simply disliking shopping right into the land of hating it.

I confess I did buy that Faux-lex watch, along with a really great copy of a Luis Vuitton handbag back in 2005 in Hong Kong, and I mainly did it for the experience. Riding in an elevator with a guy holding a walkie-talkie, then down a dimly lit hall into a tiny apartment stuffed with fake handbags really late at night... It was crazy and slightly dangerous and a little bit fun. But having done it one time did not whet my appetite for more. And the fate of the handbag? I gave it to a friend, who in turn gave it to another friend and now who knows where it's at. It was actually such a good copy that I began to fear someone would steal it off my chair at lunch or mug me for it, so I really only ever used it half a dozen times (and got half a dozen compliments each and every time). Plus, I'm not a luxury goods type of girl. A luxury travel type of girl? Yes, oh YES. But stuff is stuff and as long as what I have makes me happy and is useful, a label isn't going to raise my enjoyment of it.

But there is one China fake which I'm currently enjoying and even dragging other people to experience. My most popular blog post of all time is the one I wrote about In-N-Out Burger in Hong Kong. It gets, on average, 15 hits per day. I just googled "Is there an In-N-Out in Hong Kong?" and my blog post from back in 2012 was the #8 result. Sweet right? And clearly, I am not the only one who dreams of Double-Doubles here in Asia. And while In-N-Out has done a few pop-up experiences (my post mentions the first they tried here), there are no plans to actually open a real one. Cue the fake one... 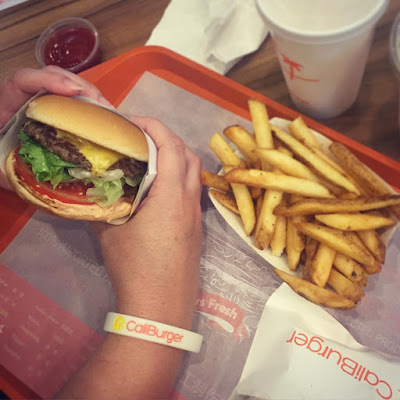 There are actually three CaliBurgers in Shanghai, and the one in the photo above is a dangerous and delicious ten minute walk from my doorstep. CaliBurger first opened here in Shanghai, and then spread to Hong Kong, the Philippines, and is now opening soon in America. They aren't shy about saying that it was In-N-Out that inspired them, and they have faced some litigation (which doesn't seem to have stopped them from opening new shops).

Their menu is similar, but with added, non-beef options (see it here). And instead of "animal style" fries, they have "wild style" fries. Plus, they sell alcohol, including boozy milkshakes (we sampled the booze-free selection).

But how does it taste? Granted, my last authentic In-N-Out Burger experience was six months ago. But I'd say it was very, very tasty. It's also similarly economic in price starting at about $5 for a combo with a fountain drink and fries, as compared to other burger joints that charge $15+ for a cheeseburger here in Shanghai.

My one disappointment is that unlike the real In-N-Out, there is no Barq's Root Beer as a choice in the fountain drinks. There's actually no fountain root beer anywhere in China (someone, please prove me wrong... I've been searching for over three years and haven't found it anywhere!).

I know not everyone is a fan of In-N-Out Burger (hi Rachel) and that other people are rabid fans of it (hi Dad). I'm just grateful that the longer we live here, the more options we have to make us want to stay here. It's pretty much win-win. And based on CaliBurger's popularity here in China, I'd say In-N-Out would do just fine if they ever wanted to do more than just these annual pop-up shops around Hong Kong! 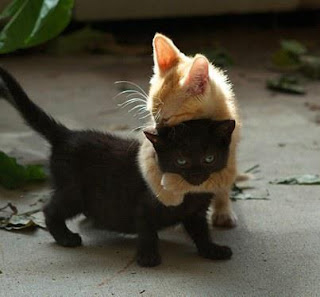 I am not naturally a hugger. I don't particularly love physical touch.

My brother totally did, and I remember as a young child overhearing a conversation my Mom had with someone else about how he would snuggle with her all day long but I was stiff and awkward with my affection.

Have you heard of the Five Love Languages? My top one is Words of Affirmation, with a close second of Quality Time, while my lowest, barely on the scale, is Physical Touch. But I married someone whose number one language is Physical Touch and gave birth to a child who must be touched in every single conversation and wants to snuggle even at age 12, so I've learned to "speak" the language for their sake.

Americans, generally speaking, are not terribly physically demonstrative when compared to many Europeans. When we moved to Macau, my husband's job was with a show which employed people from nearly every European nation along with about two other Americans. The first time I went in to the theater to meet the cast and crew, I was hugged and kiss-kissed repeatedly by sixty-odd people. The Americans in the bunch just gave a friendly wave or a handshake. To say it was overwhelming is an understatement. But it wasn't just the initial meeting, every time I'd bump into my new German or Russian or Belgium or French friends, I got the double, sometimes triple, kiss-kiss action and a hug. I decided to embrace this way of greeting, even to the point of being the one to initiate it. 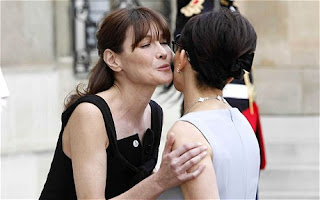 Then we moved to Shanghai. Shanghai does have expats from Europe, but there are overwhelmingly large numbers of Americans here. Especially Americans from the Midwest (lots of automotive and pharmaceutical companies here). I'd spent a year perfecting the hug-kiss-kiss in Macau, and so when I'd meet someone new here, I'd go in for the physical hello. One day a few weeks into our Shanghai relocation, we met my now-bestie Cynthia (from Indiana) and both Michael and I gave her the full European hello. Then Michael and I looked at each other and started giggling. "Sorry," I told her, "we don't usually kiss people we've just met, especially not Americans!" Awkward, but one of my favorite stories.

I've dialed down the kissing to nil, but I still hug, despite not being a hugger. I think this helps with my tendency to be slightly awkward with small talk upon meeting someone, or reconnecting with them. You can engage me in deep, soulful conversation at any time, but the pattern of niceties discussing health and weather make me crazy. A hug can work to cut through all that. However, sometimes this brings a different level of awkwardness.

I have super bright red hair in a land of dark brown hair. I stand out, and this can mean that people will remember meeting me while I might not remember meeting them. I'm also lousy with names and sometimes with faces, but have great memory of things like awesome shoes. Which people generally change instead of helpfully wearing the same awesome pair every single time I see them! I tend to compensate for this lousy memory by greeting nearly everyone as though I've already met them. This means I now have a reputation as being very friendly. Which is okay! Shanghai can be a brutal place with a population of 24 million people who are more than happy to push and shove you out of their way, or at the very least run you right over (true story, I've had many bruises and a scar to prove this). So if I can be a friendly oasis in the middle of all that, awesome! But then there are days like yesterday...

I saw an older man who looked very similar to someone I'd met many months ago and had a few conversations with. He made sustained eye contact with me, which further made me think we knew each other. So I put a huge grin on my face and bounded across the room to give him a big ol' hug. Hello! How have you been! I haven't seen you in ages! He returned my hug but his face was one of confusion. "Do we know each other? I just moved to Shanghai... and I don't think we've ever met," he informed me.

Very quickly I swallowed any embarrassment which could have caused my face to flame into fierce blushing, and tried to do a charming laugh. "Oh! Well welcome to Shanghai, then! I'm so happy you're here! Welcome! I'm Heather! I have to run and find my family now, but it was lovely to meet you and I'm sure I'll see you again soon! Buh-bye!" And out the door I ran.

I posted a very short version of this to my Facebook page, where friends chimed in to say they weren't surprised, or that I had greeted them similarly when we first met and it made them feel so welcome. Sooo, yeah. Maybe I have something in common with a certain enthusiastic Disney snowman?

I never got comfortable with the kiss-kiss greeting, but I'm now firmly a fan of saying hello with a hug. Unless you just prefer a big smile. I'm very fluent in that, too.