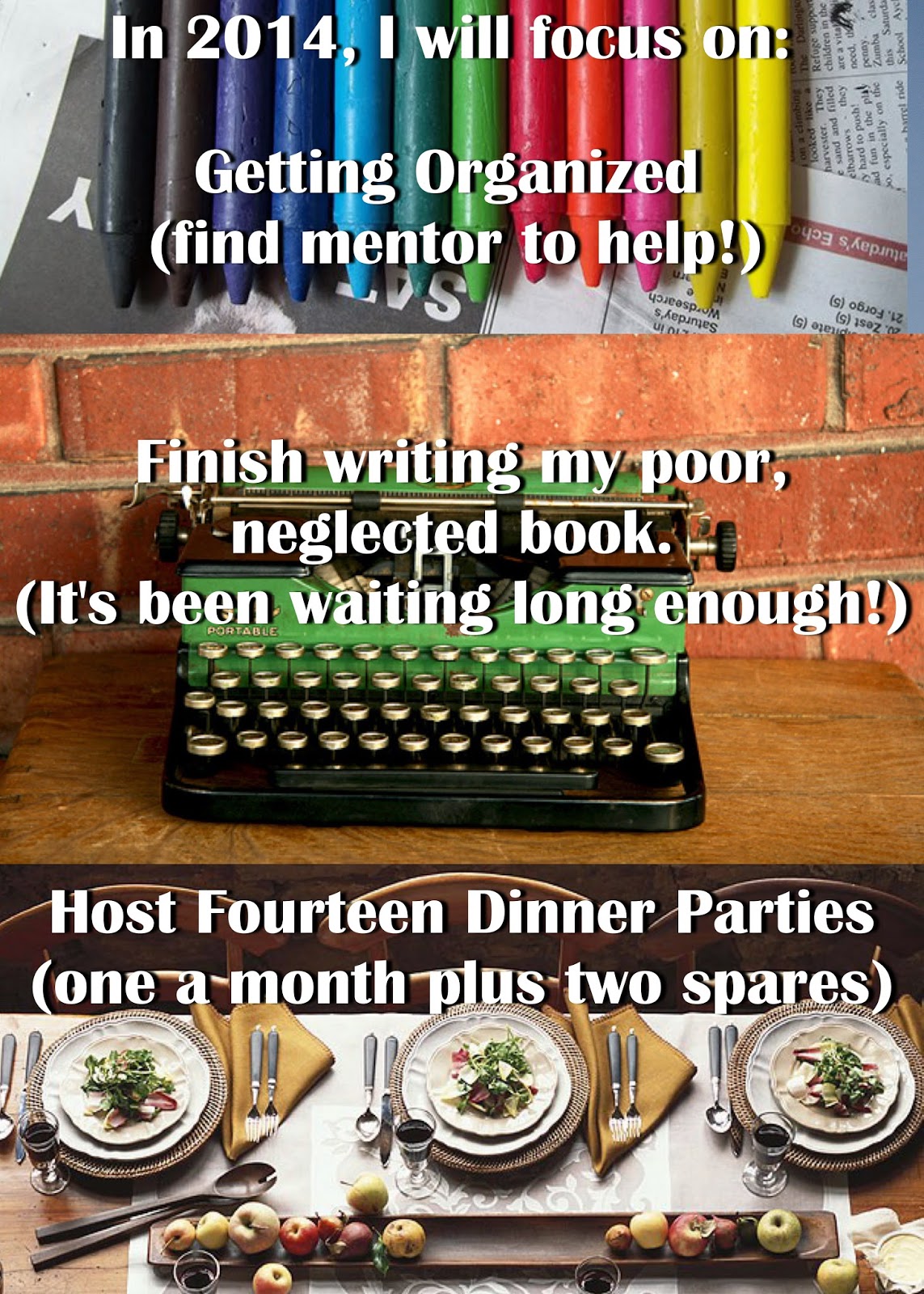 So last year was great! I had some incredibly high highs. Michael and I had a recent conversation where I was somewhat mopey and blue and said I felt like I didn't do enough this year, and he corrected me with a massive amount of things we did indeed accomplish. Not just little things, but huge, life changing, world changing things.

I think that one problem that kept me from truly embracing the highs was one particular low that I allowed to creep in and affect even the good things early on in the year and then let it hang out and stay around. I'm not going to share specifics as the root issue is still there and unlikely to completely resolve any time soon. But I will say that I'm resolute to not let it color 2015 in a negative way like last year. What's one of my biggest beliefs? That we may not be able to change a situation but we can change our attitude about the situation? Ugh. Practice what you preach, Heather! Enough is enough! Let it go!

So how about we focus on those highs? Let's check in with my goals from last year, shall we?

They were to get organized, finish writing my book, and to host 14 dinner parties (one a month plus two spares). Let's start with the least successful and work our way up...

Writing my book. So here's what happened... the book that I thought I was writing, that I've been working on in one form or another for the last five years, decided it was not the book to be written right now. I lost steam, I lost direction, I lost passion for the project. And instead, another story from a deeper, more meaningful place presented itself for my consideration. In September. Which was just four months ago. Which means "the book" or really any book, did not get finished. But I'm allowing myself to spread this goal out to the end of 2015. I'm not beating myself up over its lack of completion. This is something I really want to get right. I've done a lot of work on the new story, but almost none of it has been actual writing. Most of it has been behind-the-scenes preparation to dive into the subject matter. For Christmas this year, Michael bought me a laptop (my first ever! And it has a touch screen! Hello future!) to help remove one of the barriers to writing that I've been using as an excuse. Namely, being rooted to my office desk during the busiest, noisiest, most distracting time of day in my house, which also coincides with the time I'm at my creative peak and would love to spill some words on to the screen somewhere, anywhere, else. Now there's no excuse! Let's get it done! We bought my Christmas computer in Hong Kong (it's cheaper there than in China) in October on holiday (that's it below, being set up by the guy at the computer market). And then I had to wait and wait and wait until Christmas morning to open it. It's simple but absolutely gets the job done!

Next, my somewhat successful goal, to get organized. The problem with getting organized is less the "getting" part, and more the "staying" part. In a very #firstworldproblems manner, allow me to complain for a moment about my part-time housemaid, or ayi. Full disclosure, I love not cleaning toilets, doing laundry, ironing, or dishes. I love being able to afford help who does those things quickly and efficiently though with great care. Our ayi does not speak a word of English (other than sorry, which she says to say goodbye at the end of her shift) and my Mandarin caps off at about 25 words, most of which are pleasantries and ways to give directions to taxi drivers. All that to say there have been some missed communication moments. Such as when I ask her not to water my plants and she water-boards them to a boggy death. Or more central to this situation of getting organized, when I ask her to not touch my desk or "organize" my office, and she goes in and grabs every single paper and proceeds to sort them by size then color, rather than my more efficient method of subject matter then importance. Also, my ayi never met a box that she couldn't find something to put in it, and her classification system hinges on a priority of what fits rather than what might more logically go together. Meaning I had a box that had three pairs of long underwear, my favorite black v-neck sweater, a bag of unfilled plastic Easter eggs, the boys framed baby photos, Pop Rocks candy gum from Auntie Holly in the States, a bunch of Disney pins for the new Cars Land area in Disney California Adventure, all topped off with a stack of colored printer paper. And that is just one box of many, which were similarly creative in their contents. And without staying right on top of it, my office became like Aladdin's Cave of Wonders, a place filled with super neato stuff, if only you had the time to dig through and find it. Yes, yes, I repeatedly told her not to "help" in this way, and she repeatedly agreed, but it still happened. There is too much to like about her to let her go over this, but it's hard when the area I struggle the most with (clutter, staying organized) and am working the hardest to overcome is being sabotaged at every turn. 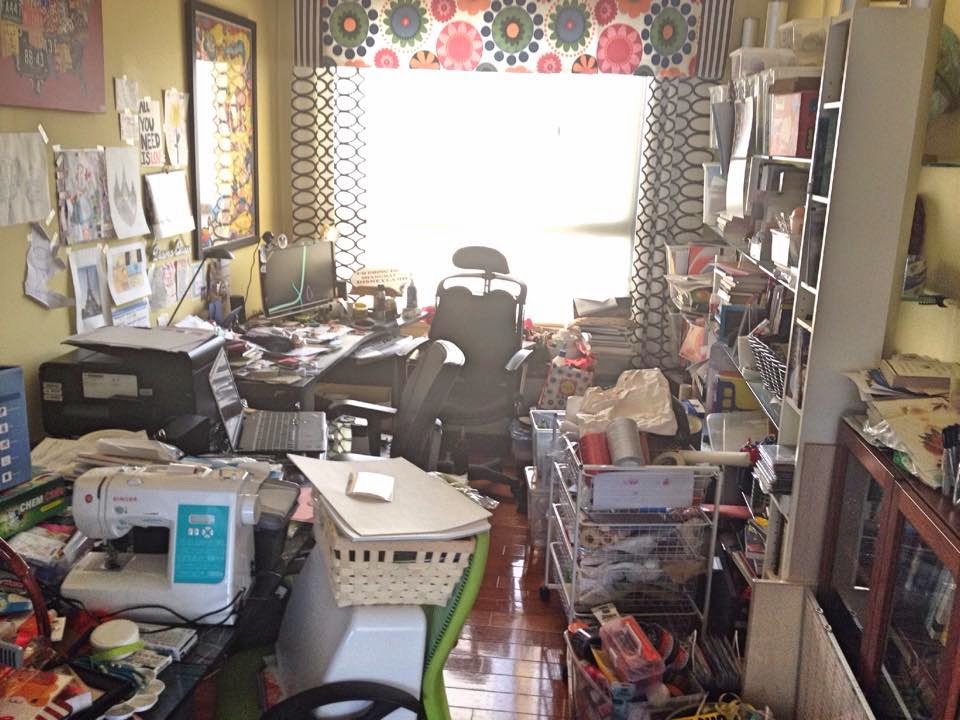 I confess, it wasn't until the very last week of 2014 that I finally snapped. My office looked like what you see above. I couldn't take it any more. No light cleaning was going to help, it needed major surgery. I removed every single thing from the office except the furniture and then went through it all in the living room, putting things back one by one, tossing massive amounts of junk, until I now have a somewhat peacefully arranged space where I can get what I need quickly and efficiently. Will it stay that way? I don't know. I'm trying to use my tactic from the beginning of the year where I do just a little bit every single day to keep it tidy. I have no after photo, but I'm sitting it in now, in that black chair by the window and feel peace while looking around.

And finally, my third and most successful goal from 2014. Throwing 14 dinner parties in 2014. Are you ready to be blown away? On December 26, 2014, we hosted our final dinner party of the year. It was not number 14. It was number 41. I am more shocked about this than perhaps anything else I've ever done in my life. Four years ago I had to teach myself to cook because I was allergic to shrimp/shellfish and we lived on an island where everything had some sort of fish sauce on it, leaving me forever itchy and covered in hives. Four years ago I dove into learning how to make things from scratch because convenience foods were not easy to come by in Macau, and when they were, they were expensive. Four years ago I had three "signature dishes" that I would rotate through when people came over for dinner, and two of them involved opening cans and combining them. This past year, I had over a hundred people (not all at once!) come to my home, sit at my table, and eat food I prepared by myself from scratch. With great love. From many recipes I created myself.

To say I'm shocked by this is such an understatement. I loved doing this! I loved inviting people from our various circles to join up with people they had never met before and leave our home as friends. I loved the creative challenge I set for myself to make things from scratch cheaply rather than jump to the more expensive ready made imported products. And I loved being able to tangibly show my affection for people and make them feel loved and at home by giving them a meal to eat. I'm not exactly sure when it happened, but at some point in 2014, what I thought was a Big Hairy Audacious Goal became a lifestyle. And best of all, I love that my final dinner party of 2014 was like coming full circle... it was with 9 of the 10 people who sat around my table at Christmas of 2013 and inspired me to make the dinner party goal in the first place. 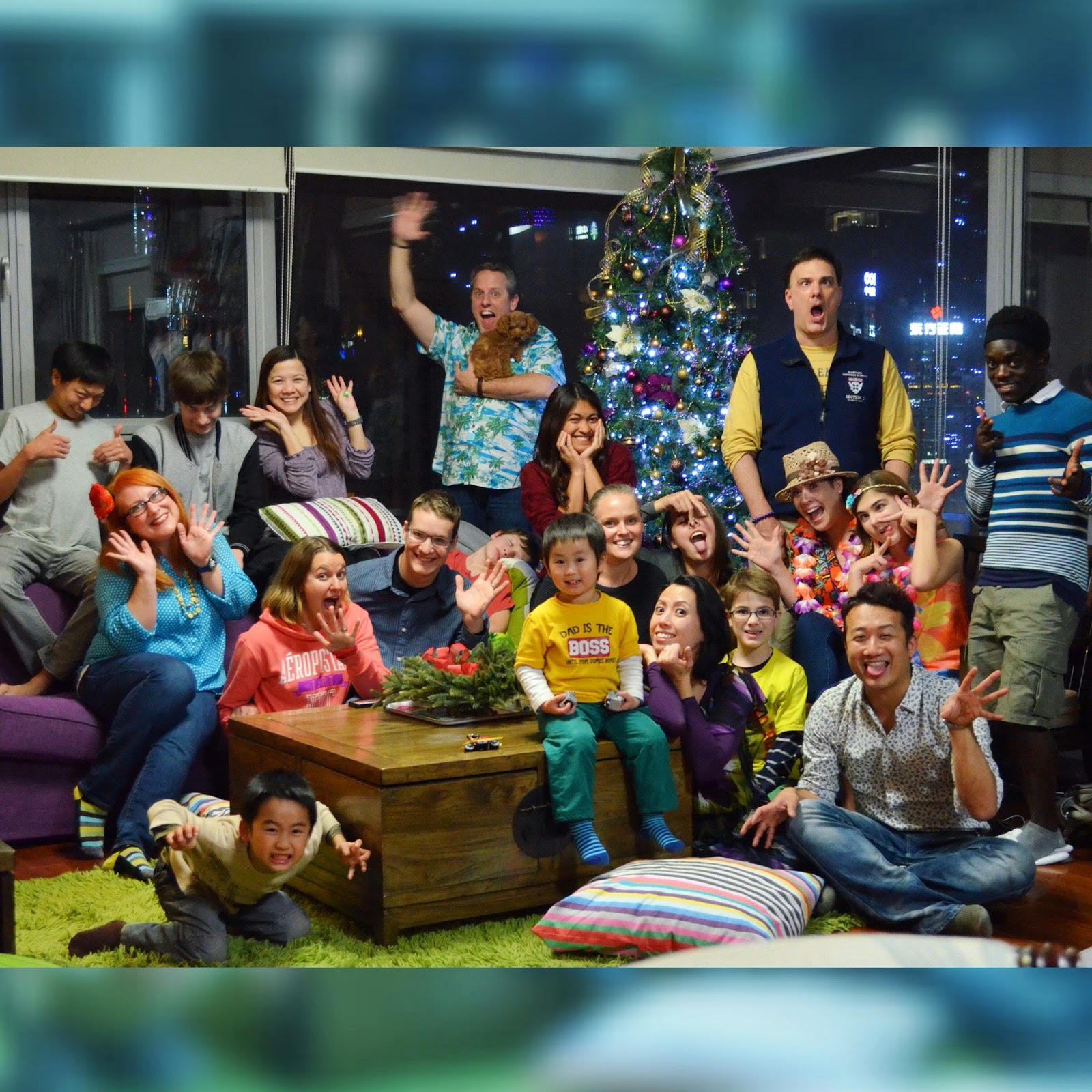 Life is beautiful. So are these people.

So what's up for 2015? I've got some things up my sleeve. I decided not to make a big set of goals again. Definitely will be working on my book. I have a theme word for the year, as well as some other creative endeavors which I'll be sharing soon. When I think about the year laid out before me, twelve months lined up in a row, I get butterflies in my stomach. The kind you get when something really awesome is about to happen. Looking forward with great anticipation!

Happy New Year, friends. Glad you're along for this journey!
By Heather Rose-Chase at January 06, 2015