My Mom was one of those girls obsessed with horses. She didn't get one until she was an adult though. She and my Dad both had one, and the story goes that one was sold when I was born, and then the second one was sold when my little brother came along. Horses are expensive! When I was in middle school we lived on a plot of 2.5 acres about an hour north of Los Angeles.  Since we had the space, my Mom gave me what she always wanted growing up, a horse of my own.

I loved my horse, a huge and gorgeous Morgan. She was a pro who'd done both western and English style riding, barrel racing and dressage (jumping), parades and even some police work. Nothing ever spooked her, not even coming across an angry rattlesnake on a trail, which she gingerly stepped around while my companions' horses bolted and jumped every which way, nearly tossing their riders. While the other girls in my community worked with their horses every day to get them to listen to their cues, my horse Chela (CHEE-la), made me look awesome without any effort on my part. This is a good thing, because I was not one of those girls obsessed with horses, so hard work would have meant less love for Chela. Not that taking care of a horse is easy! But she made it worth the effort. All this to say that when I heard about an opportunity to go ride horses on the seashore, I was extremely excited about the opportunity to get back in the saddle.

We were promised a day riding horseback by the sea on a small island. Small is relative... the island was 25 square miles, which is still larger than Macau which only claims 18 square miles. We went to Hengsha Island via car, about a two hour drive plus ferry ride from my home in downtown Shanghai. To see how far we went, see the map below. We live right about where the * is before the word Home, and we went to the squarish island about where the * is after the word Island. 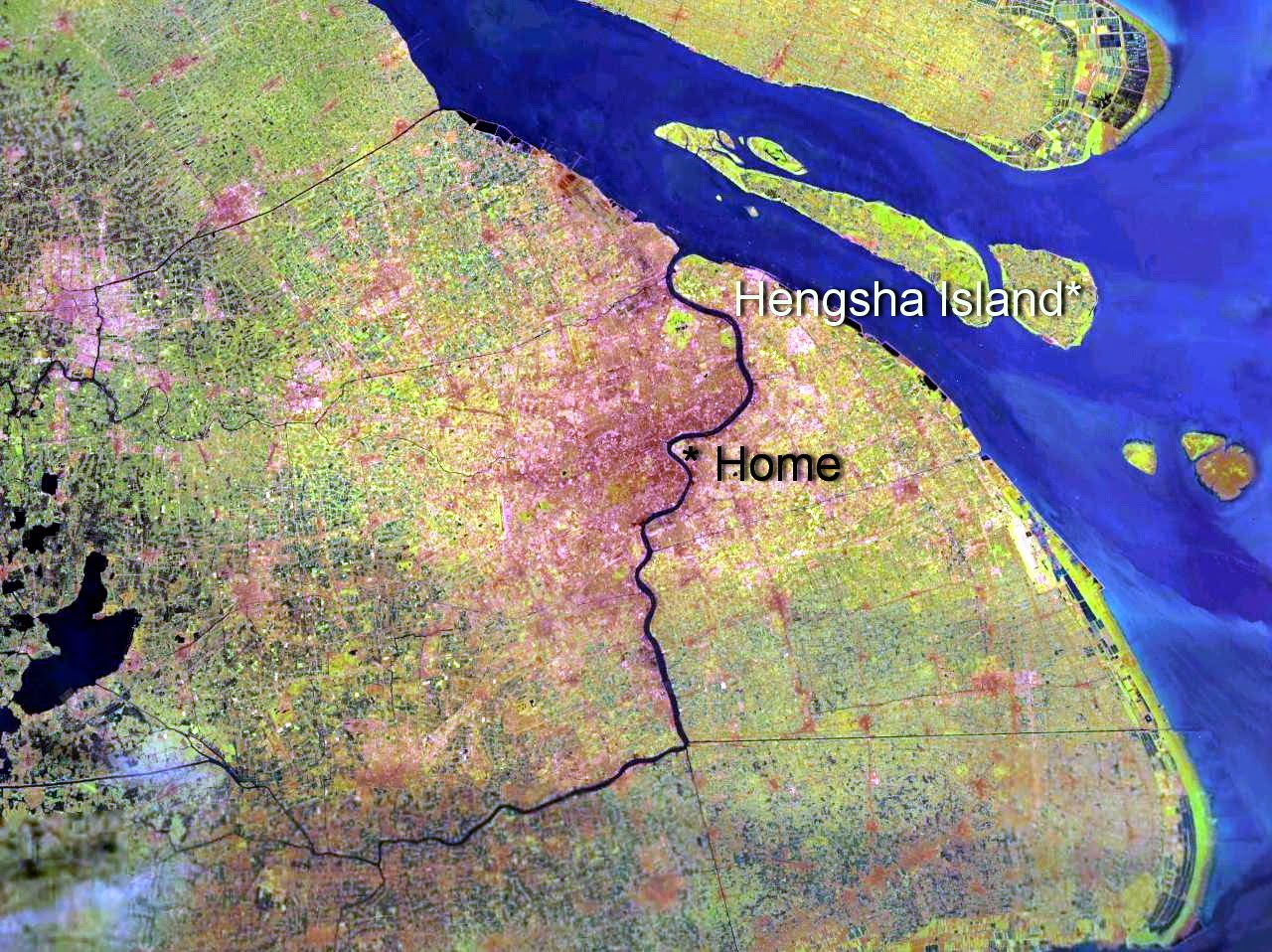 Just so you get an idea of how big Shanghai is, everything you see in the photo above on the right side of that lake on the bottom left is part of Shanghai. The bright blue is the end of the Yangtze River, and the islands you see in the mouth of the river leading out into the East China Sea are alluvial islands, made up of silt flowing down the river. Much of the island we visited was marshy land with very low buildings. No high rise towers to be found.

To get there we took a tunnel under the river to the long skinny island, and then our van drove right onto a ferry boat which took us across to Hengsha Island. I've been on many a boat and in many a van, but never in a van while on a boat!

We drove the length of the island to get to the ranch, which sits in a hotel resort filled with these little villas. Knowing we were on an island, I immediately had flashbacks to the television show LOST and the camp of the Others. Michael got a card from the front desk, because we have to go back, Kate! 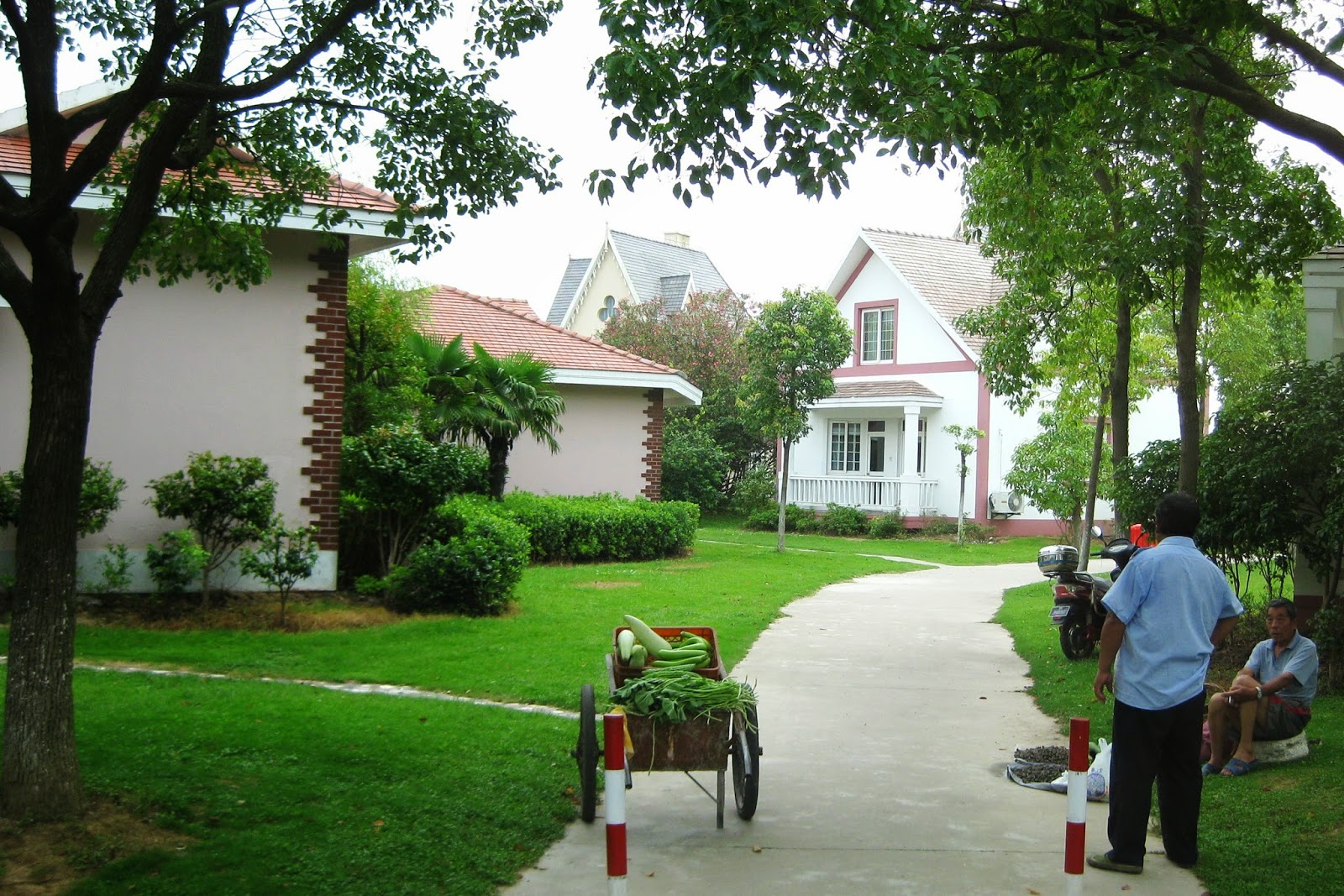 We unloaded from the van, used the facilities (squatty potties), and then got suited up. We were outfitted in nifty leg chaps, which proved to be very useful while riding through the marshes, and helmets. Side note: helmets are a must with horses. My friend Sue who I've known for 25+ years has worked professionally with horses her entire adult life, and preaches helmet wearing like a revival tent reverend. She was recently thrown from a horse, badly damaged her body, but would not be here today were it not for the helmet she was wearing. Helmets, people. Not just for bikes!

Our group was small, just ten people. We were joined for the day by our friends Riza (left) and Lirie (right), both from the Philippines and working here in Shanghai for Citibank. They both love adventure, and not knowing if this was going to be a crazy awesome trip or just a crazy trip, I was hesitant to invite anyone along. But knowing Riza and I share the same philosophy (it's always a great day as long as you get a story out of it), I made sure she came. 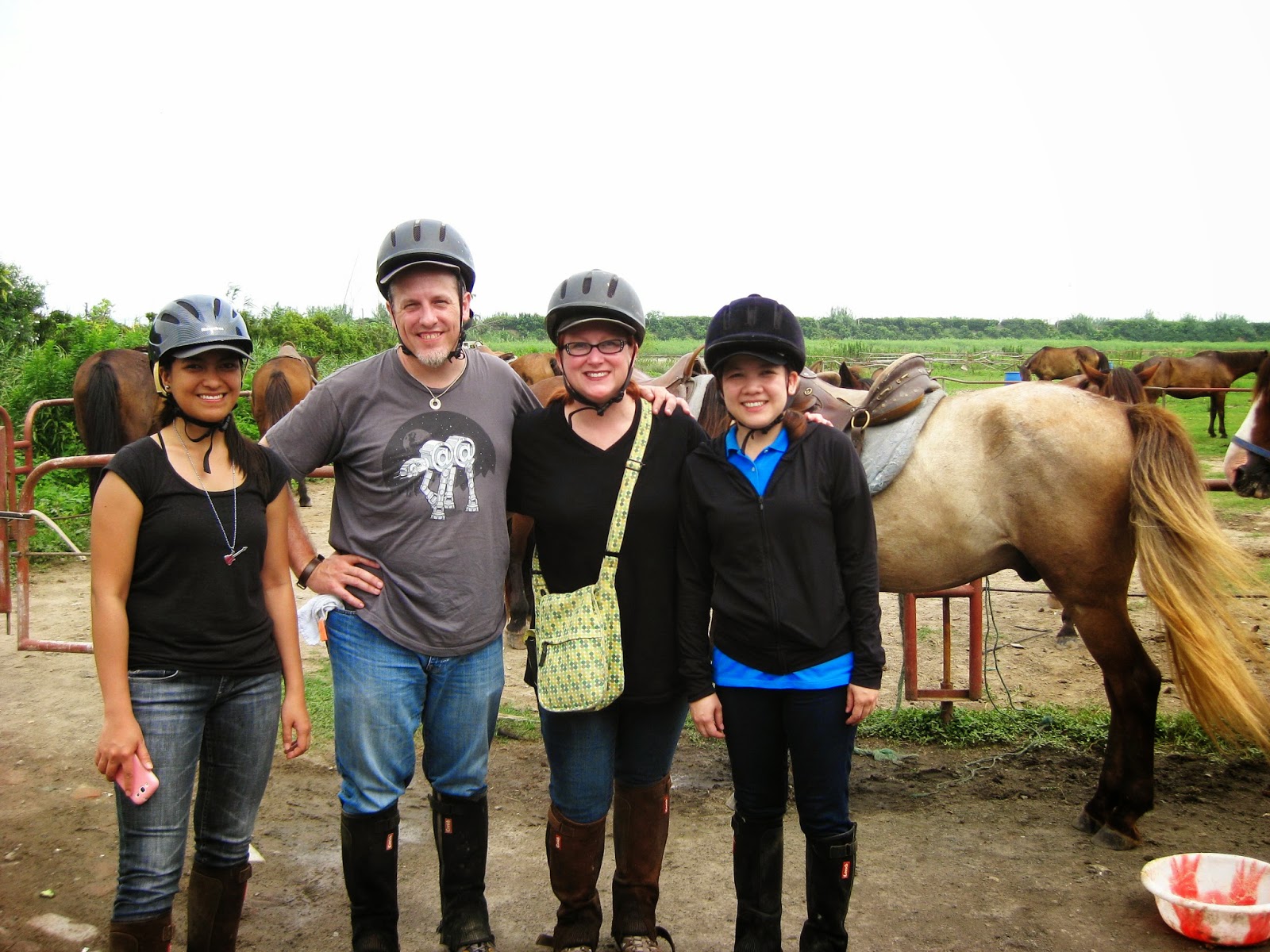 We were quickly paired up with horses and given some basic instruction. It took no time at all for me to remember my lessons from so very long ago. My body, however, did not quite respond in such an agile way as it did when I was fourteen!

We went on two hour-long rides, with a lunch break in the middle. We rode through the LOST village up a steep bank to a hole in a fence leading down to the marshes. 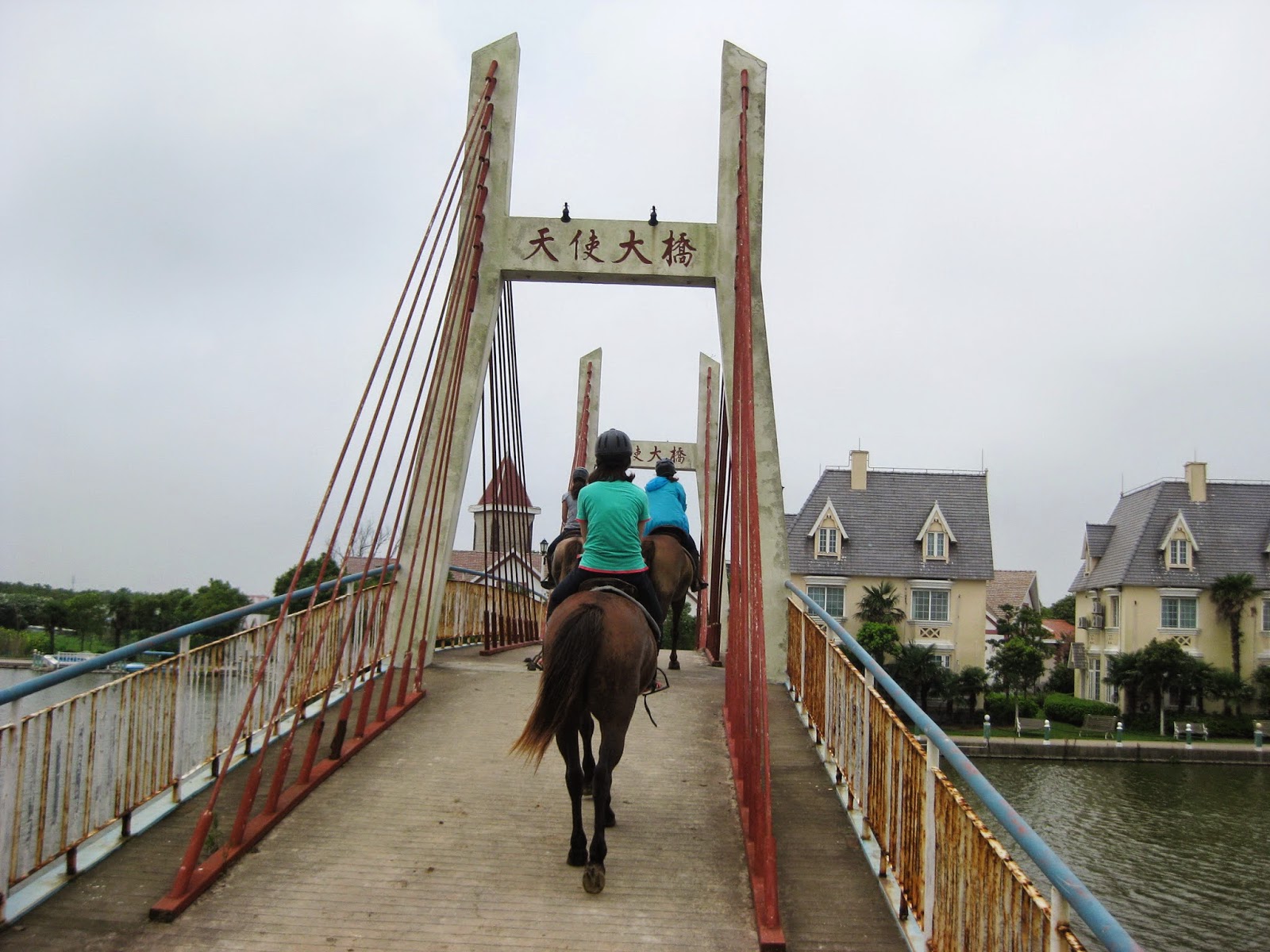 When I saw the hole, I thought, "Are we really going through there?" We did indeed. And yes, my hair is really that red right now (and the heat+sweat made my face that same color most of the day as well). 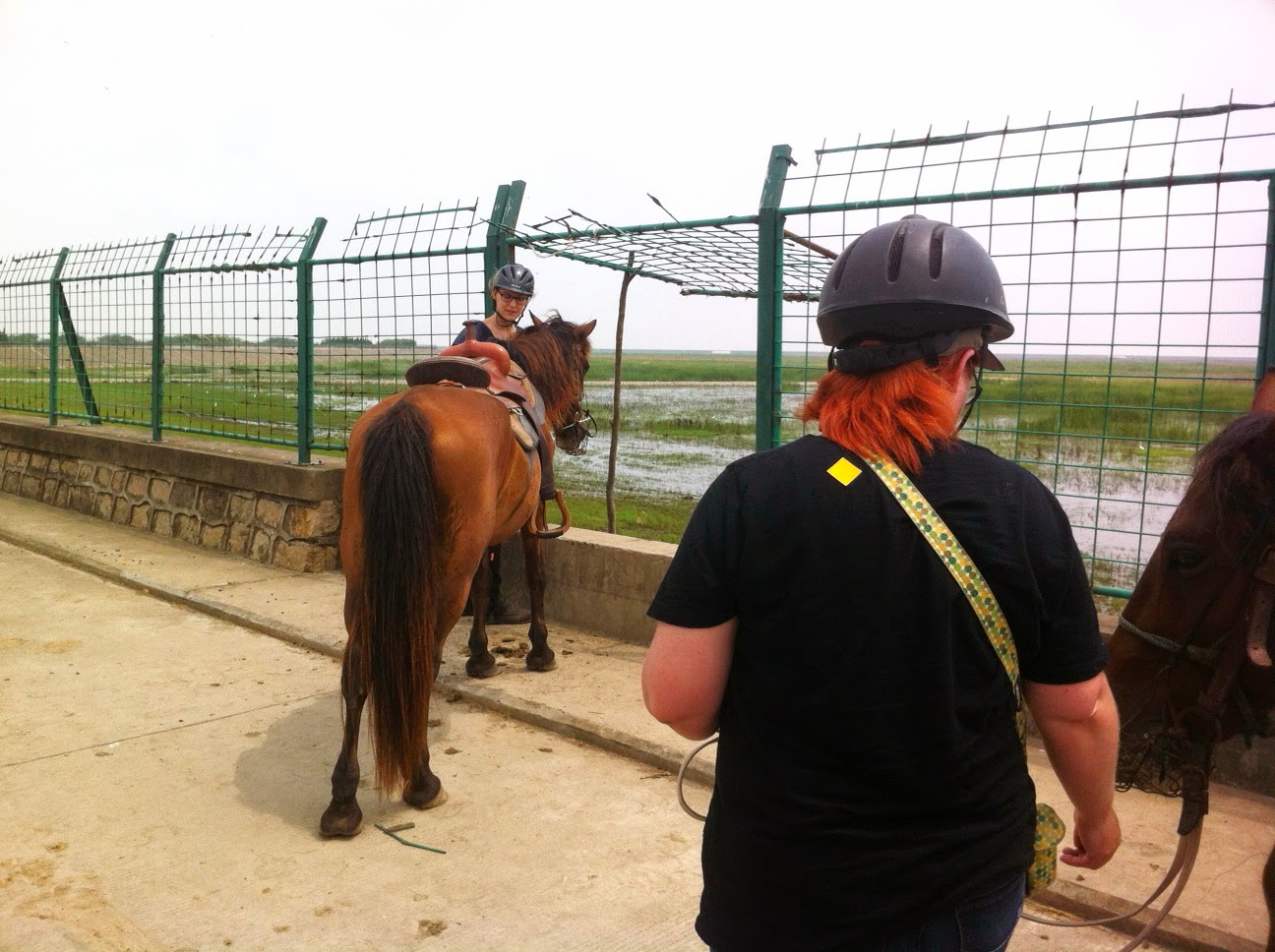 Coming down on the other side of the hole in the fence. The horses didn't balk at it one bit. The same cannot be said for the humans! 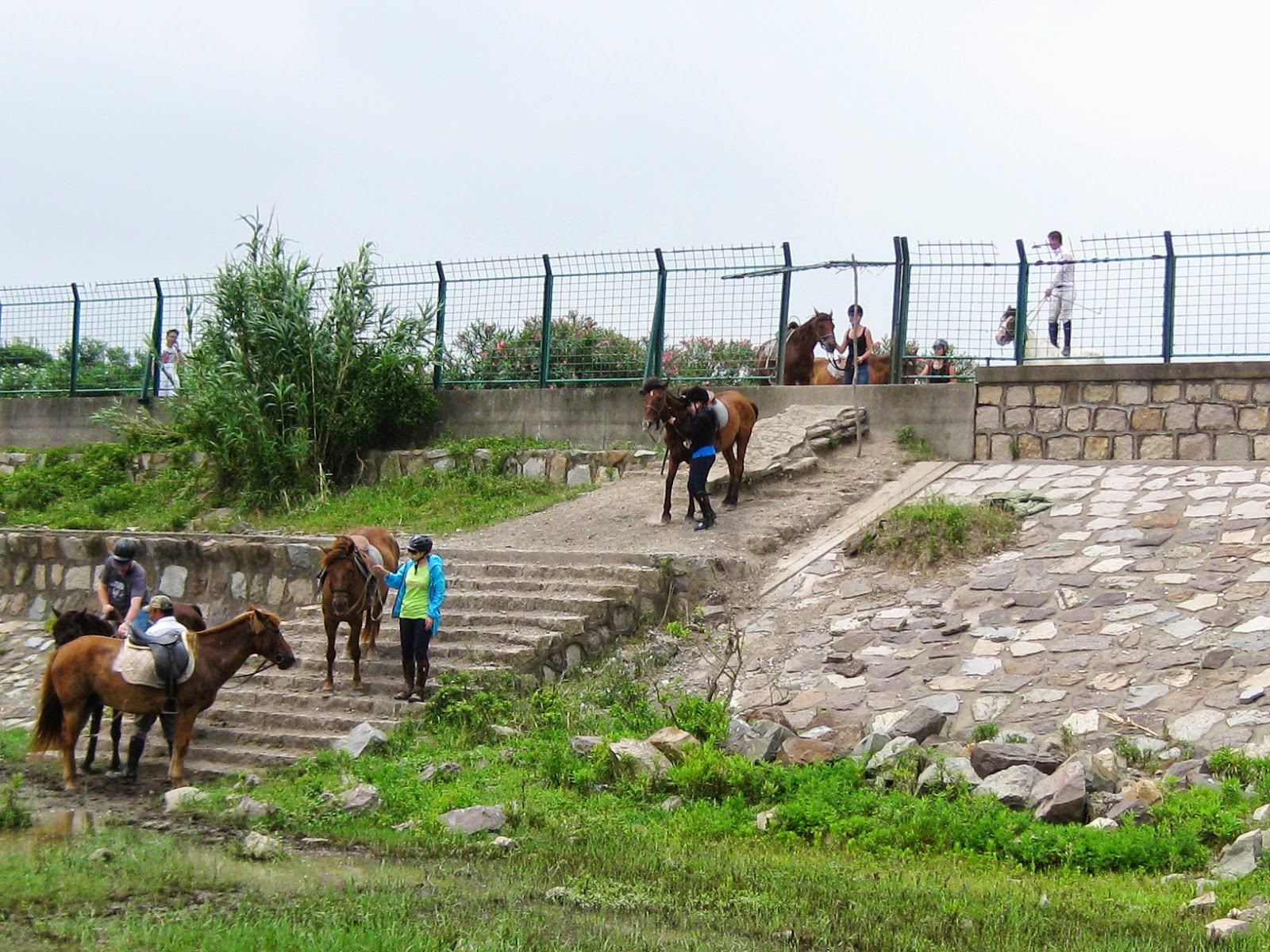 We started our ride through the marshland, and gratitude for the leg chaps was immediately felt as the water and mud kicked up. It was a hot and humid day, but the cloud cover kept the direct sun off of us, and the breezes from the sea were quite cooling. 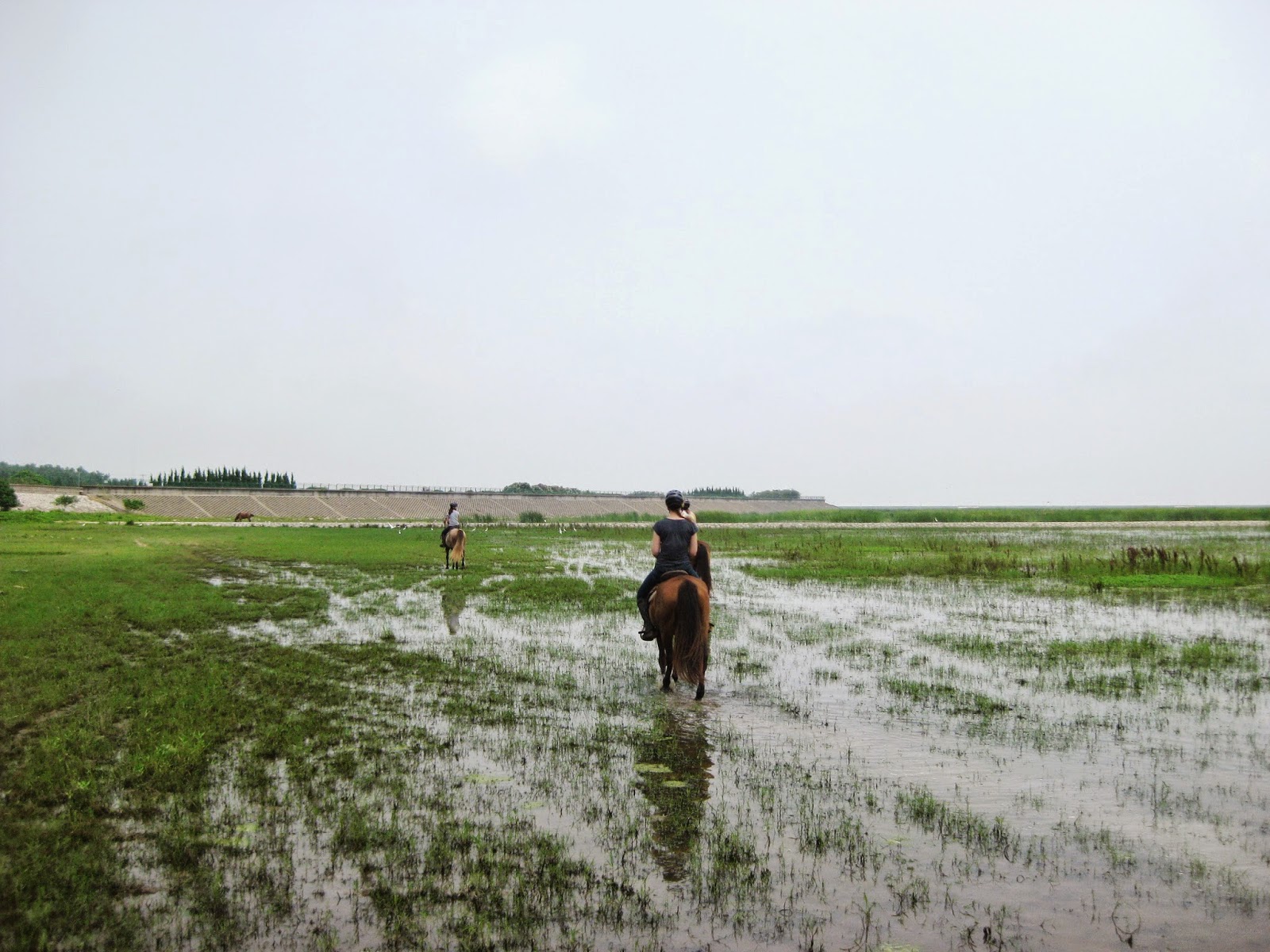 We rode alongside a dam, and saw lots of wildlife, including noisy water-jumping frogs, goats, cranes, and a herd of cows who were giving us some serious stink-eye as we went past. 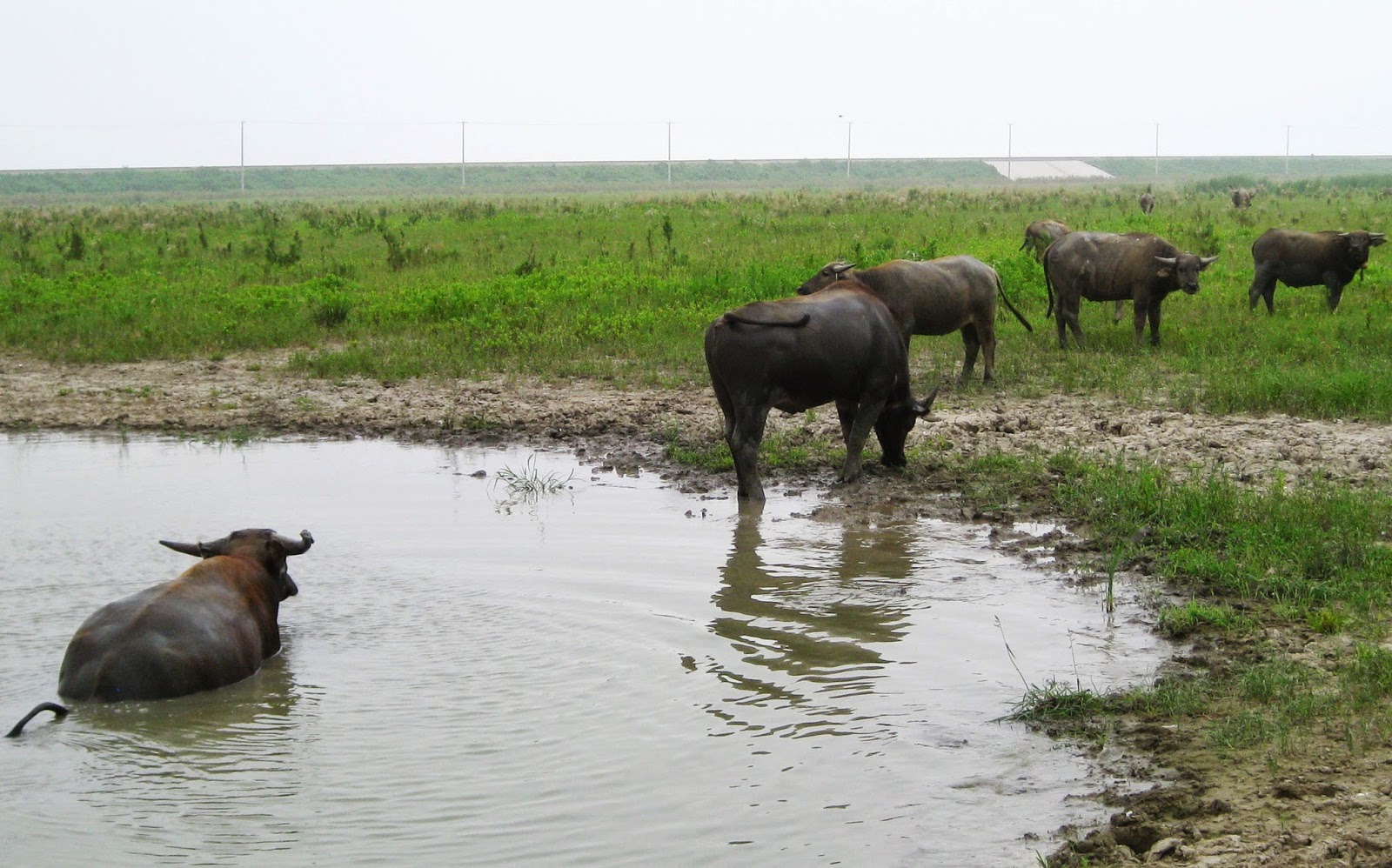 Michael on a horse: 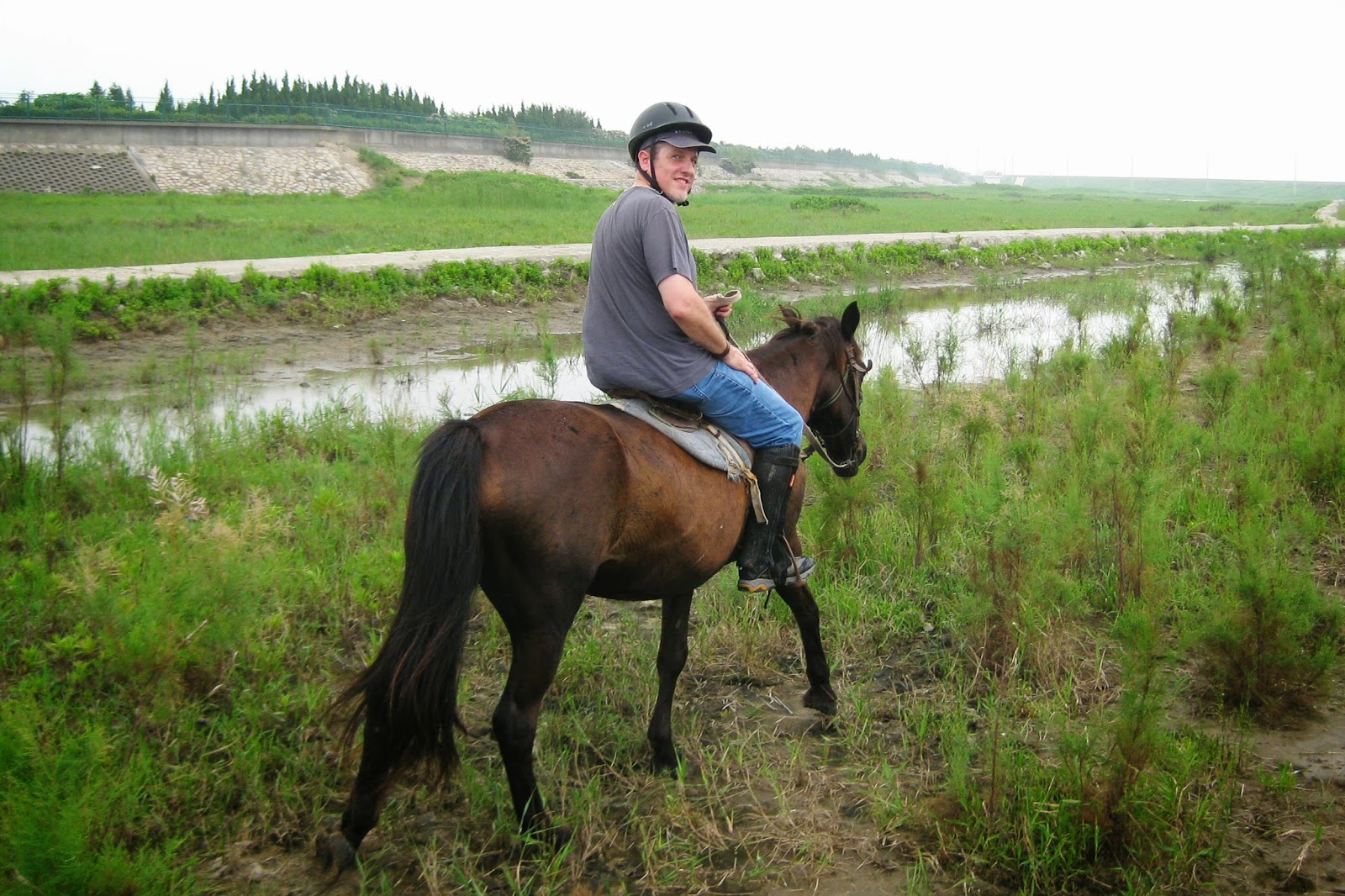 You could tell these horses are used to doing this route, because we got to a certain point and every single one of them stopped, paused, and then made a wide arc to head back.

My horse and Michael's horse were not friends. They refused to stay together. I think the photo I took of Michael above and the photo Michael took of me below were the only two times we ever got close to each other! 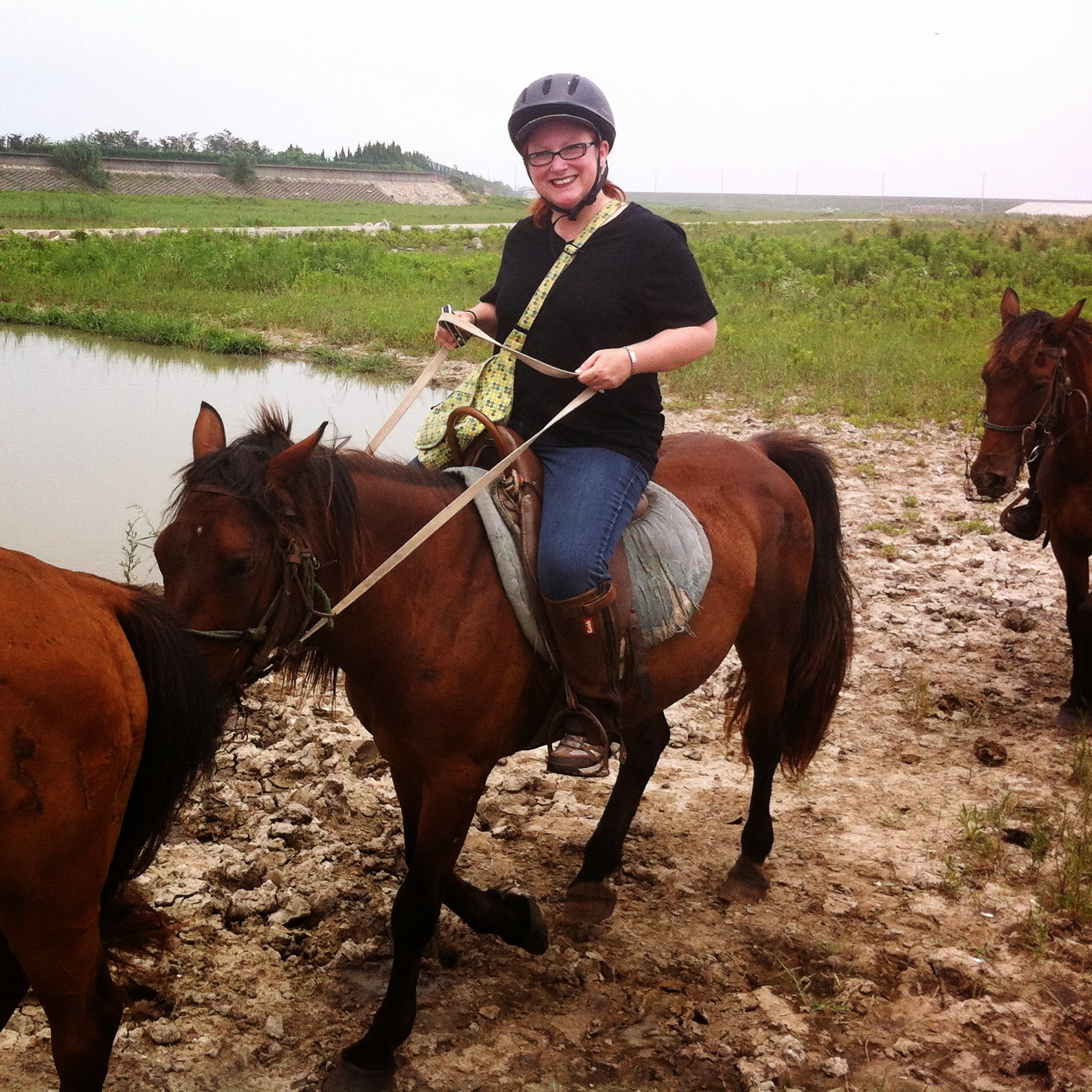 After the first ride, we went for a five minute drive to a restaurant. There was absolutely nothing about the place which would indicate it was a restaurant. No sign, very out of the way location, and looking quite like a traditional house. But it had a few tables and air conditioning, so we ate what they put in front of us. It had a traditional flushing western toilet, so it got the seal of approval from my legs, which were quite like jelly after an hour of riding.

We walked around the immediate area for half an hour, peering onto the porches and yards of the houses in the neighborhood. Most had small gardens growing produce to feed their own families. 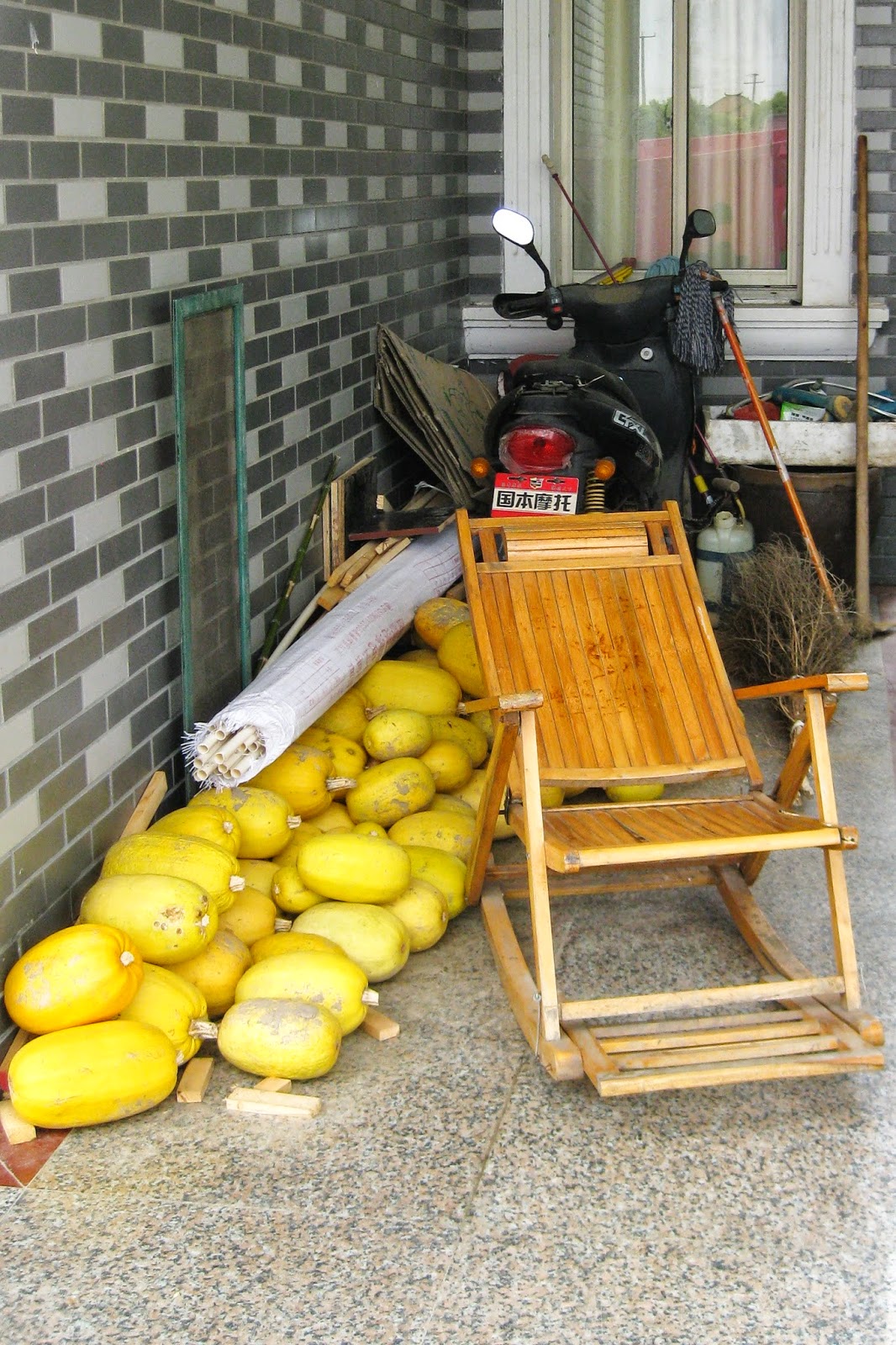 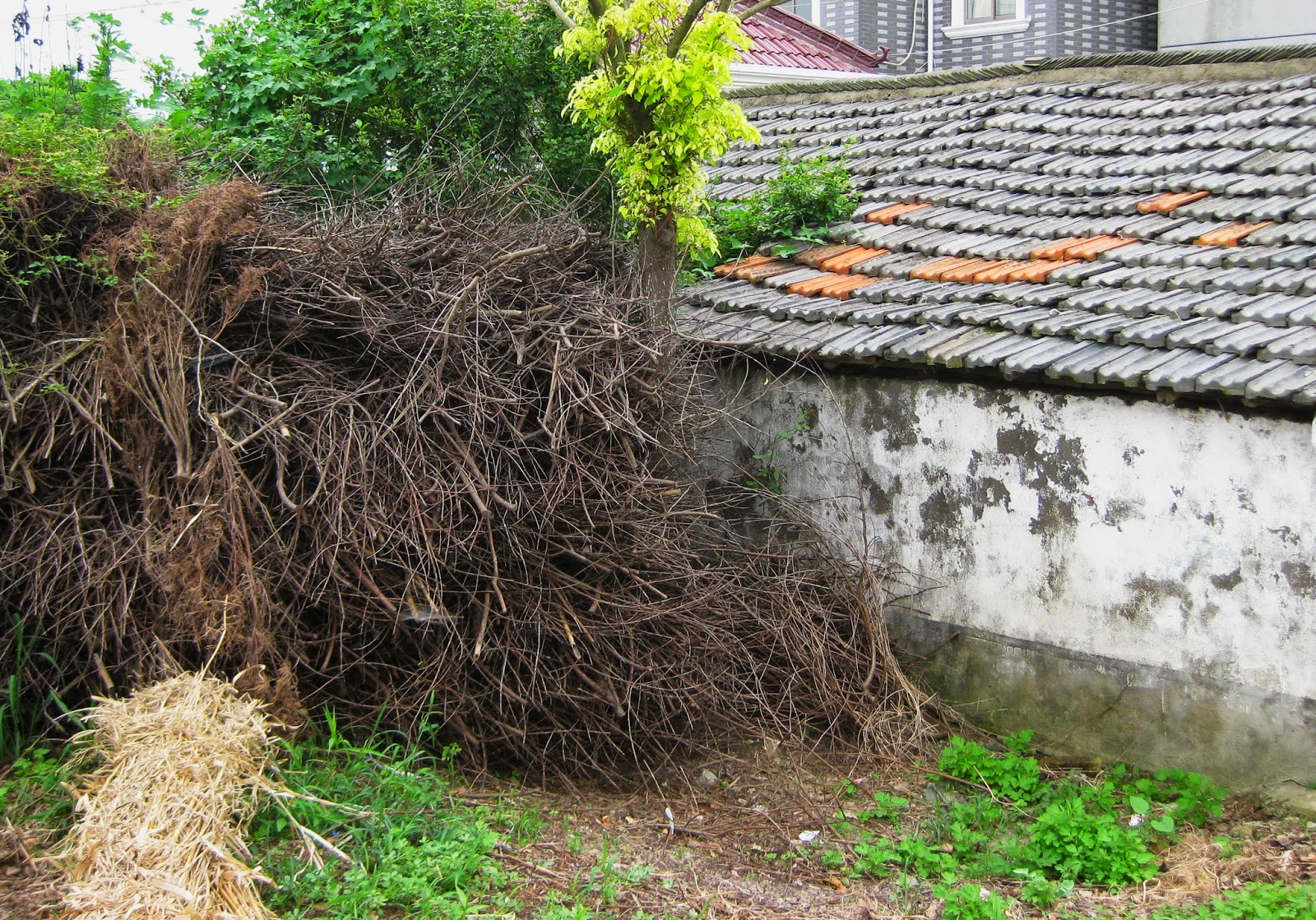 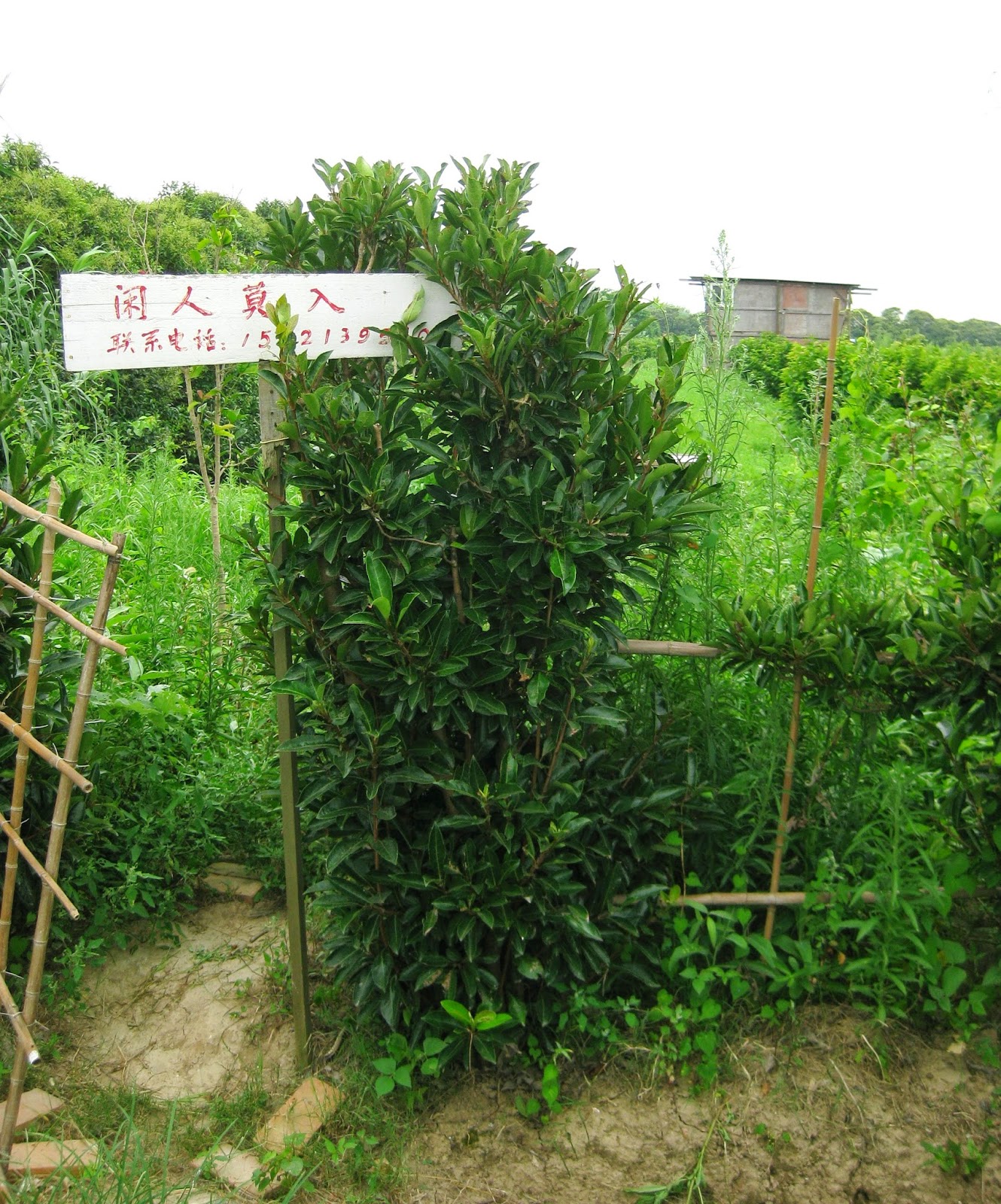 After lunch it was time for our second ride. We went a different direction, straight out toward the East China Sea. We went through the shallow marsh land again, before riding along some higher ground. 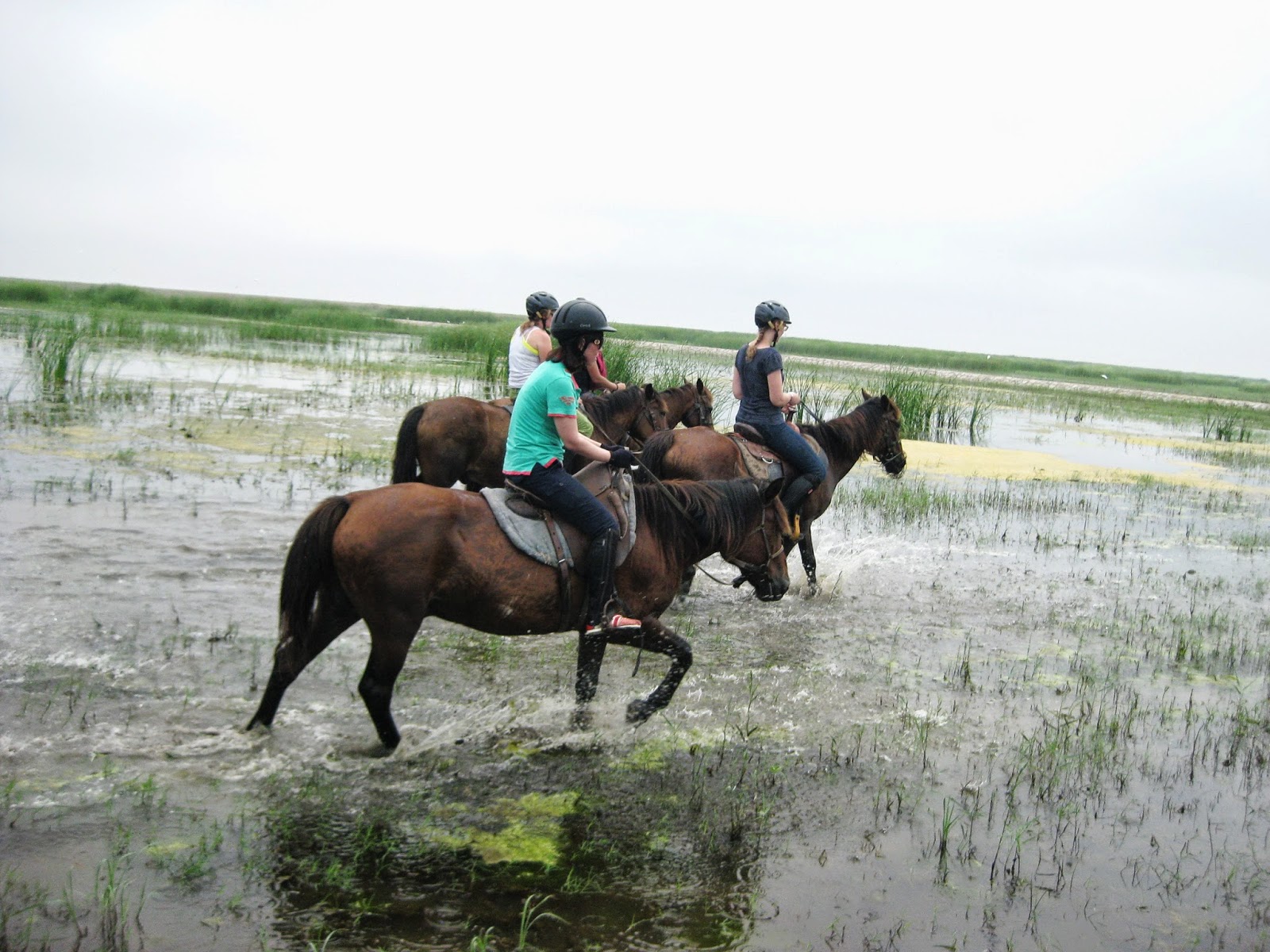 The horses spread out quite a bit, and mine drifted toward the back, where I got lost in daydreams. Until the coach bringing up the rear would shout "Jia!" and my horse would break into a trot. Ouch. Ouch, ouch, ouch. I tried posting, going up and down in a pattern with the trot, but my stirrups were a bit short, and my knees were a bit, um, well, they're just getting older like the rest of me. Ouch. 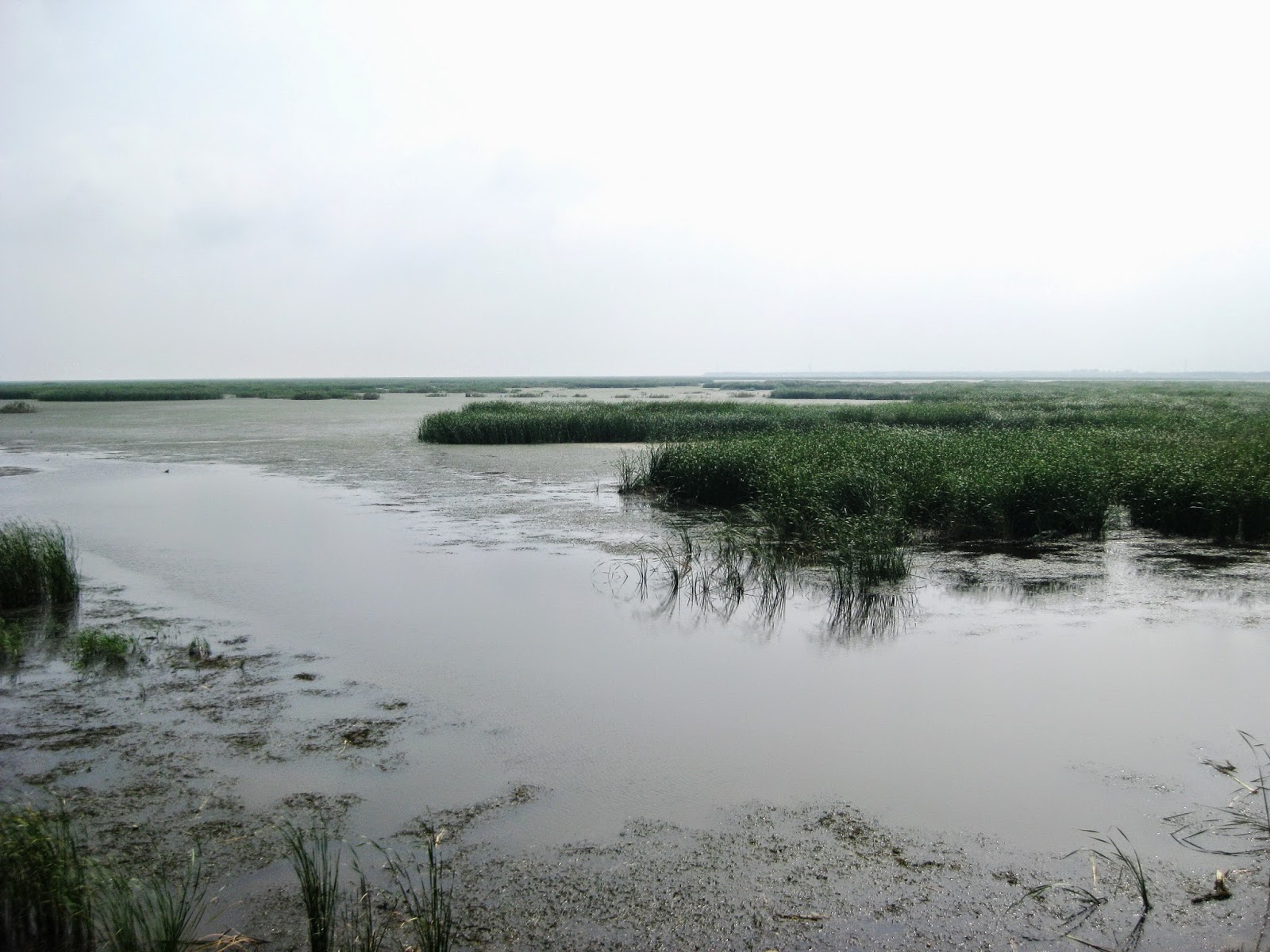 We finally rode right up to the sea wall, where the horses lined up to let us admire the view. All the photos I took out toward the sea look like a wall of grey. But the breeze was amazing, and I really didn't want to turn around to go back. 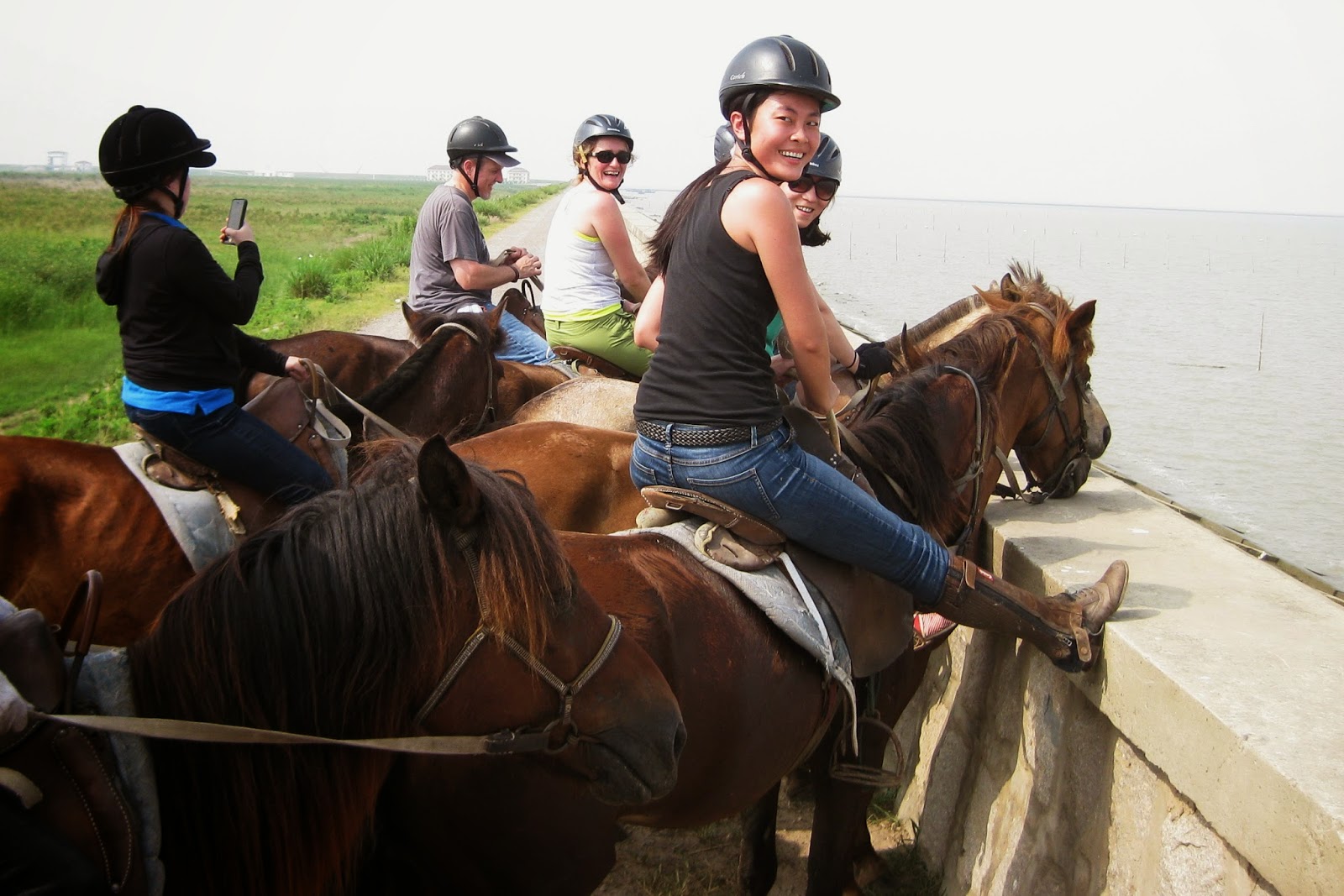 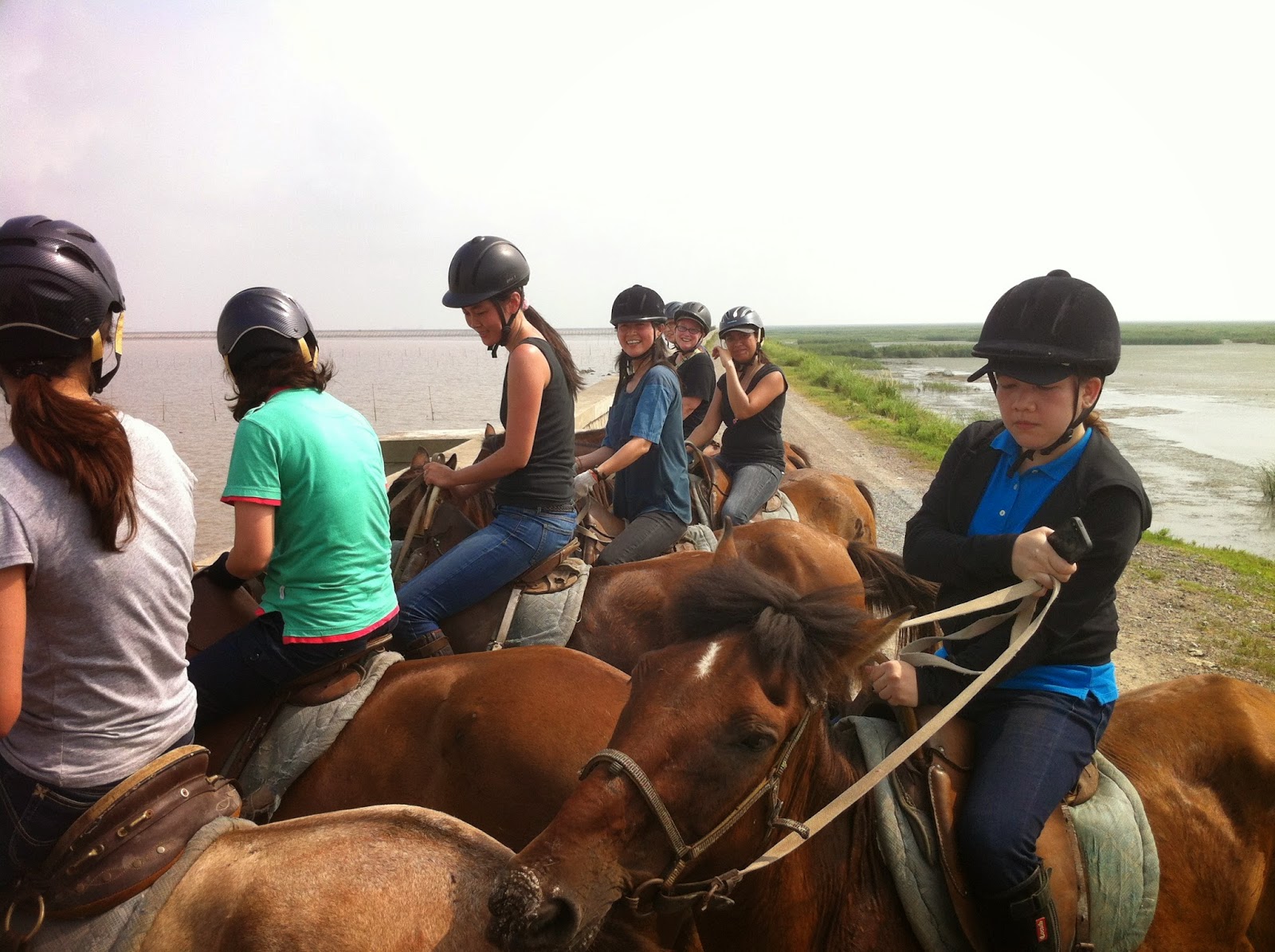 But alas, we had to return. And sadly, those glorious sea breezes were now at our back. Which meant my bright red face began to drip sweat as though it was a rain cloud. It was not a good look for me, and everyone who saw me exclaimed about how red my face was. Yeaaaaah. That happens. A lot actually, since my surgery. I think my face must be jealous of all the attention my fiery red hair gets, and wants in on that action.

The photo below was taken at the sea wall above, looking back at our starting point/destination, which is the horizon line. My heart sank when I saw how far we had to go to return, and how pokey-little-pony my horse was being. I don't think he wanted to return either. 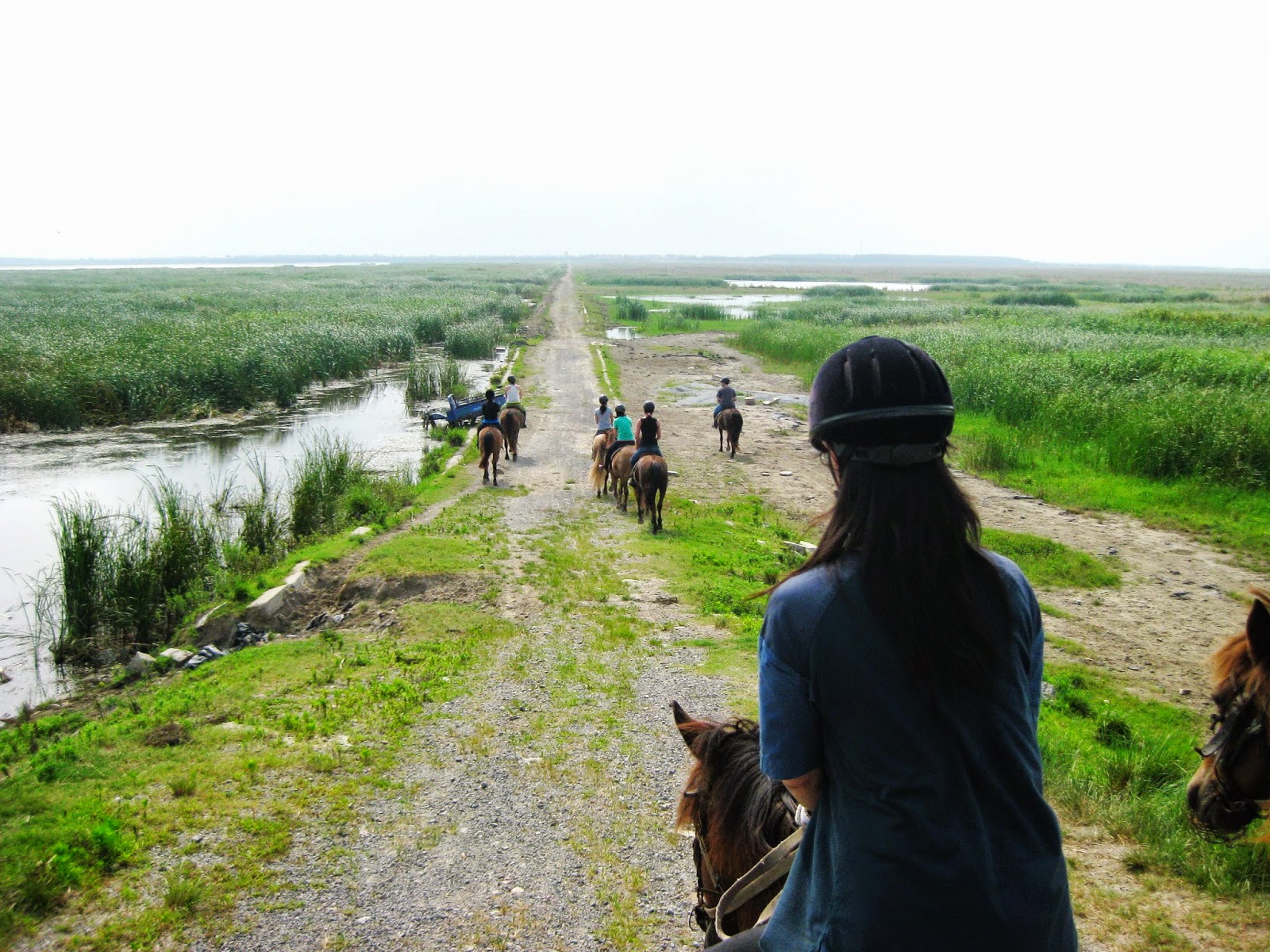 But eventually we made it back, where we were treated to watermelon which was grown just a few meters away. After we had our fill, the horses decided they wanted some too, and moved in for a sweet treat. 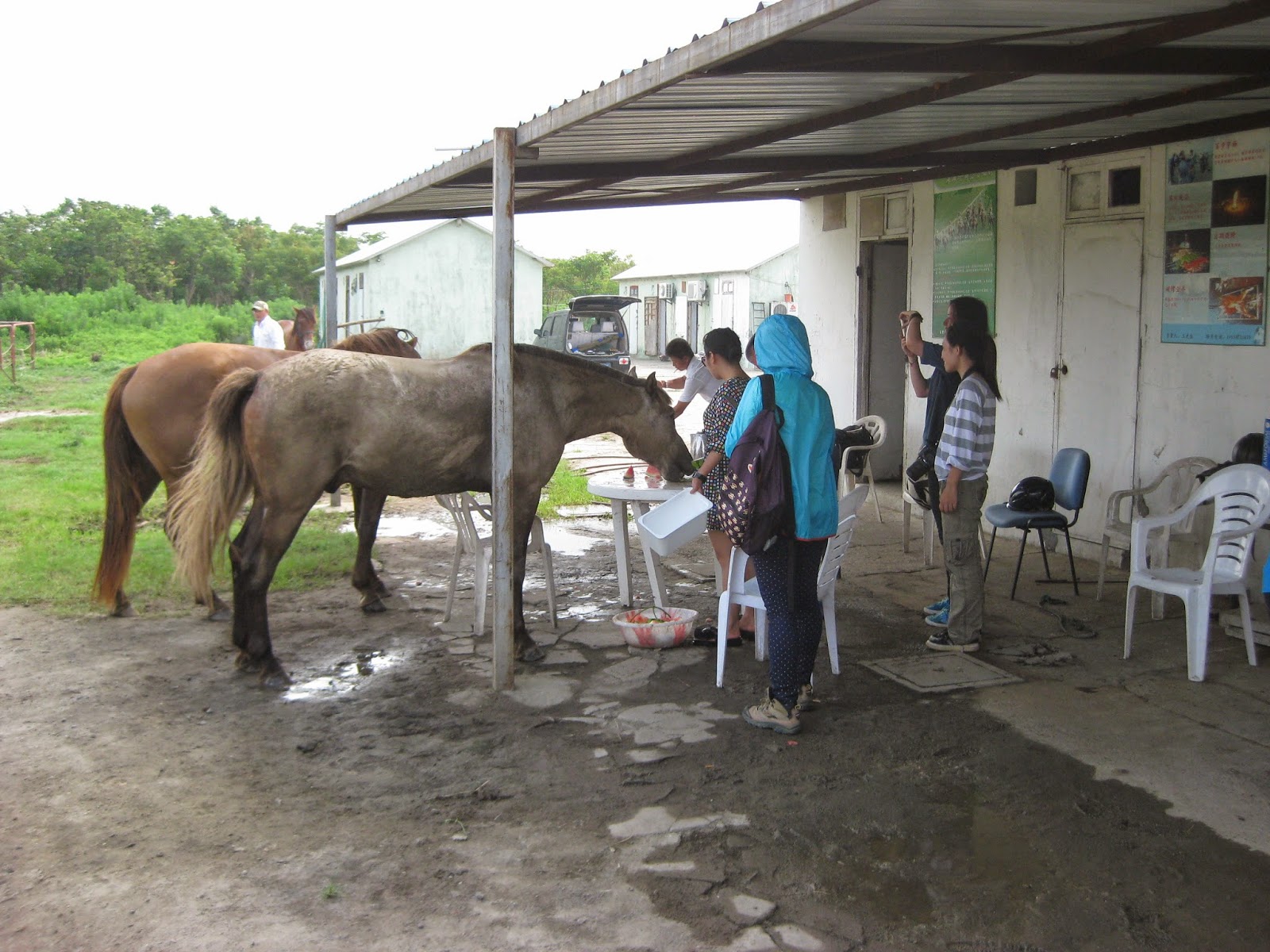 Good bye horses! See you in another life, brothas! 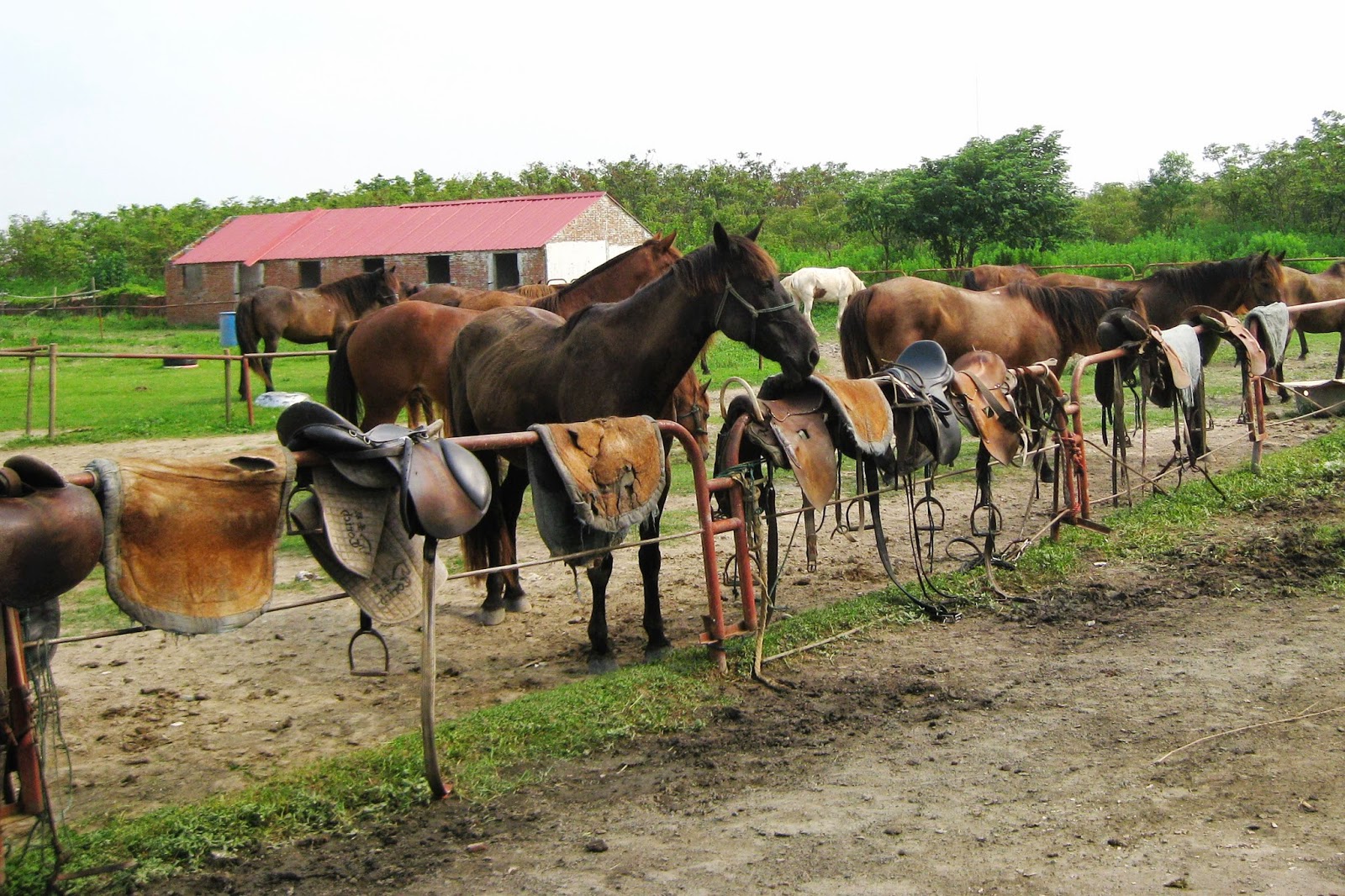 All in all, an extremely fun day. Just wish I wasn't so painfully paying for it now! 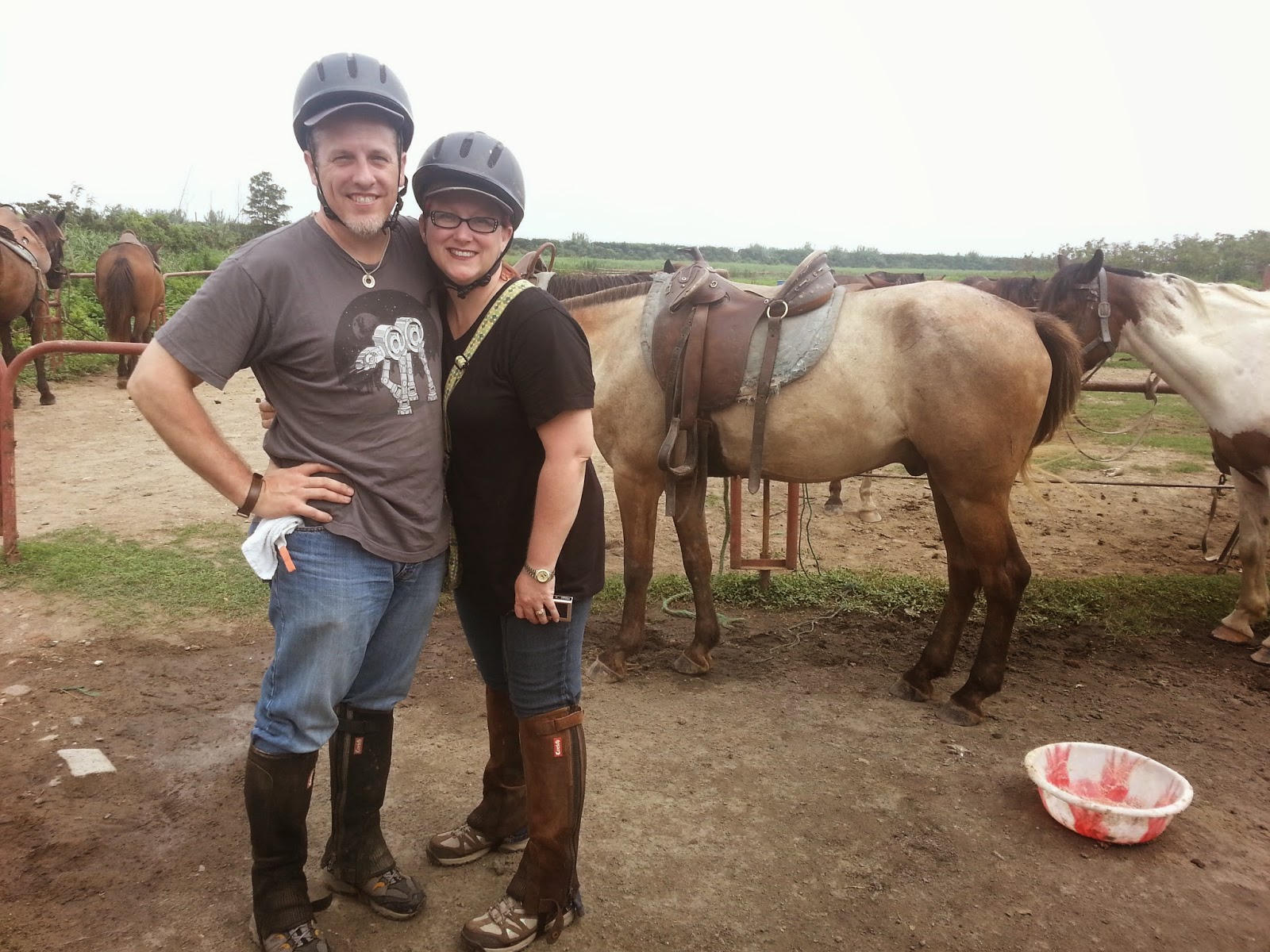 Trip booking details can be found here.
By Heather Rose-Chase at July 30, 2014