Monet in Shanghai, good for the soul

In October we had the amazing experience of visiting Paris. We had only four days there, and two of them were spent at Paris Disneyland and the Walt Disney Studios as part of our Year of The Mouse experience. Which left us with just two days to explore the rest of the city. We jammed in so much! It was very surreal... I expected to like Paris of course, but I did not expect to fall in love with it. How cliche, yes? Ah, but I was bit by the bug which latches on to so many who have the City of Lights tucked away in a small or large part of their hearts! I confess, as we sat on our train speeding our way from Paris back into London, I shed honest-to-goodness tears, which rolled down my cheeks as the gorgeous countryside whizzed by far too fast. We will go back! Of that I'm sure.
While there, we had time for just one art museum. And deciding to go big or go home, we hit the Louvre, racing through the halls just a few hours from closing to push our way to the front of the large room holding the tiny Mona Lisa. What we missed in exchange, however, was visiting the Musee de l'Orangerie, home to some of the large panels of Monet's Water Lilies. We did speed past the entrance to the l'Orangerie on our way through the Tuileries Gardens as we made our way up the Champs-Elysees to the Arc de Triomphe. But alas, a leisurely visit must wait until our next trip. Le sigh. But Claude Monet and his lilies still had a hold on me, despite not seeing them with my own naked eye. 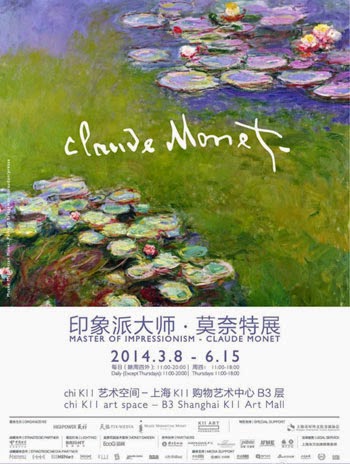 Cut to February, back in Shanghai. To celebrate the 50th anniversary of Franco-Sino diplomatic relations (which is French-Chinese), a selection of Claude Monet's paintings, along with several by his contemporaries where placed on display in a gallery here in the city, from March 8 through June 15. I became very excited, and then promptly forgot all about it. Which happens. And then while cleaning up my pile of papers on my desk two weeks ago, I found the original postcard advertisement and became excited all over again, knowing we still had a week left to see the paintings in person.

My excitement was doubled, as I'd just finished reading Malcolm Gladwell's latest book, David and Goliath: Underdogs, Misfits, and the Art of Battling Giants. (Side note: it's a great book. Read it.) In the book, there's an entire chapter devoted to Monet and his French Impressionist friends, who were the wee little shepherd boy David, going against the Goliath Salon system of judging and displaying art and gaining recognition. Monet and the French Impressionist movement is something little school children today know about because of the way they rebelled and branched out on their own. Rebel artists? Be still my heart! 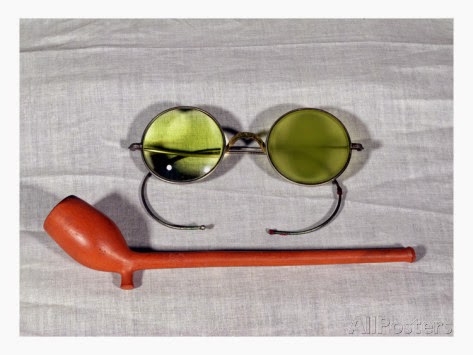 One week before the exhibition closed, we high-tailed it across the river to see 52 Impressionist paintings, including a portrait of Claude Monet painted by his buddy Pierre-August Renoir. A big surprise to me was the inclusion of Monet's green-tinted glasses, pipe, and a palette covered in oil paint. I found this image of his glasses on the internet... I wonder if the blurriness helped give his paintings that dreamy feel?

The exhibit was arranged somewhat chronologically, and shared much of the story of his life. The place was absolutely packed. Having lived in Asia for the last three years, we're used to having bodies pressed up against us, but I will say it's not the ideal way to view and appreciate art! 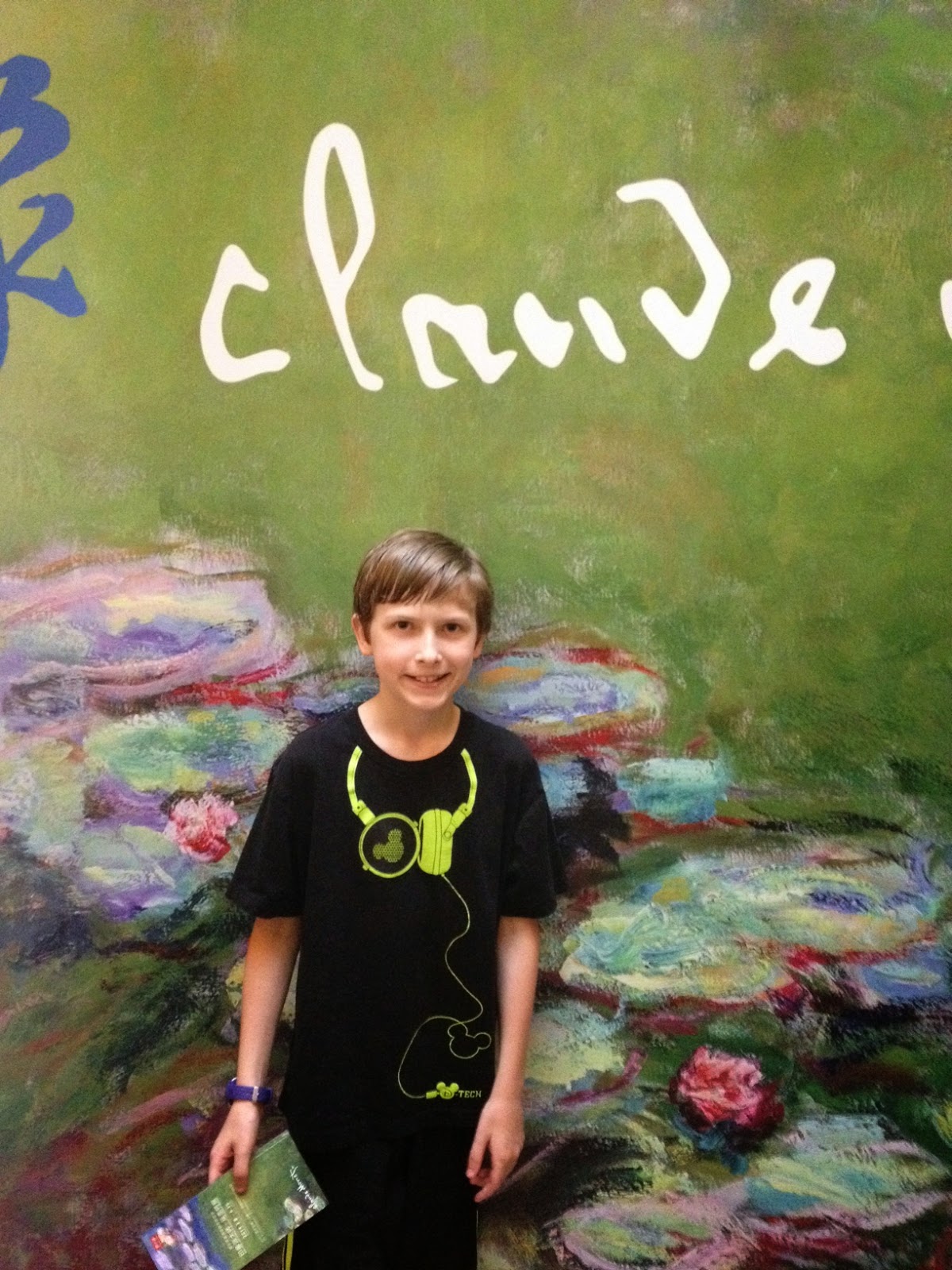 When we finally arrived in the hall which contained his floral and garden works, I stopped in the middle of the room and burst into tears facing a giant painting of Water Lilies (the final photo of this post). It was just so overwhelming to be standing in the middle of such a body of work from someone who believed so strongly in what he was doing that he was willing to face ruin and ridicule. Looking at his innocuous-to-2014-standards work, it was hard to believe that the work of the Impressionists made such huge waves in the art world of the 1870's. I guess my tears were just the overflow of emotion from the way we all have the opportunity in our lifetime to make waves ourselves, changing the world for people in generations to come.

I'm so grateful for this season of living in Shanghai. I loved Macau like crazy, but the opportunities for viewing art and culture were limited, requiring us to head to Hong Kong to see most anything of note. But in Shanghai there is so much to see! The only downside is the way things are advertised... I only heard about the Monet exhibit at all because I'd found a postcard advertisement in my local corner Starbucks way back in February. I never saw a single print ad anywhere else. The postcard itself was completely in Chinese except for the reproduction of his autograph across the Water Lillies painting (see above with Ben), I had to actually google "Monet in Shanghai" to find out about it! But seeing the exhibition, and being so very moved by it, has allowed me to reignite my efforts in seeking out these opportunities. In fact, I just got back from a wild taxi ride across town to hunt down tickets to see a Tim Robbins' directed production of A Midsummer Night's Dream which arrives in Shanghai on Thursday (sorry if you're local and reading this, I literally grabbed the final four tickets to the sold-out run). My plan is to soak in culture until it oozes out of me! Be careful... if you check back here often enough, you just might get some on you! 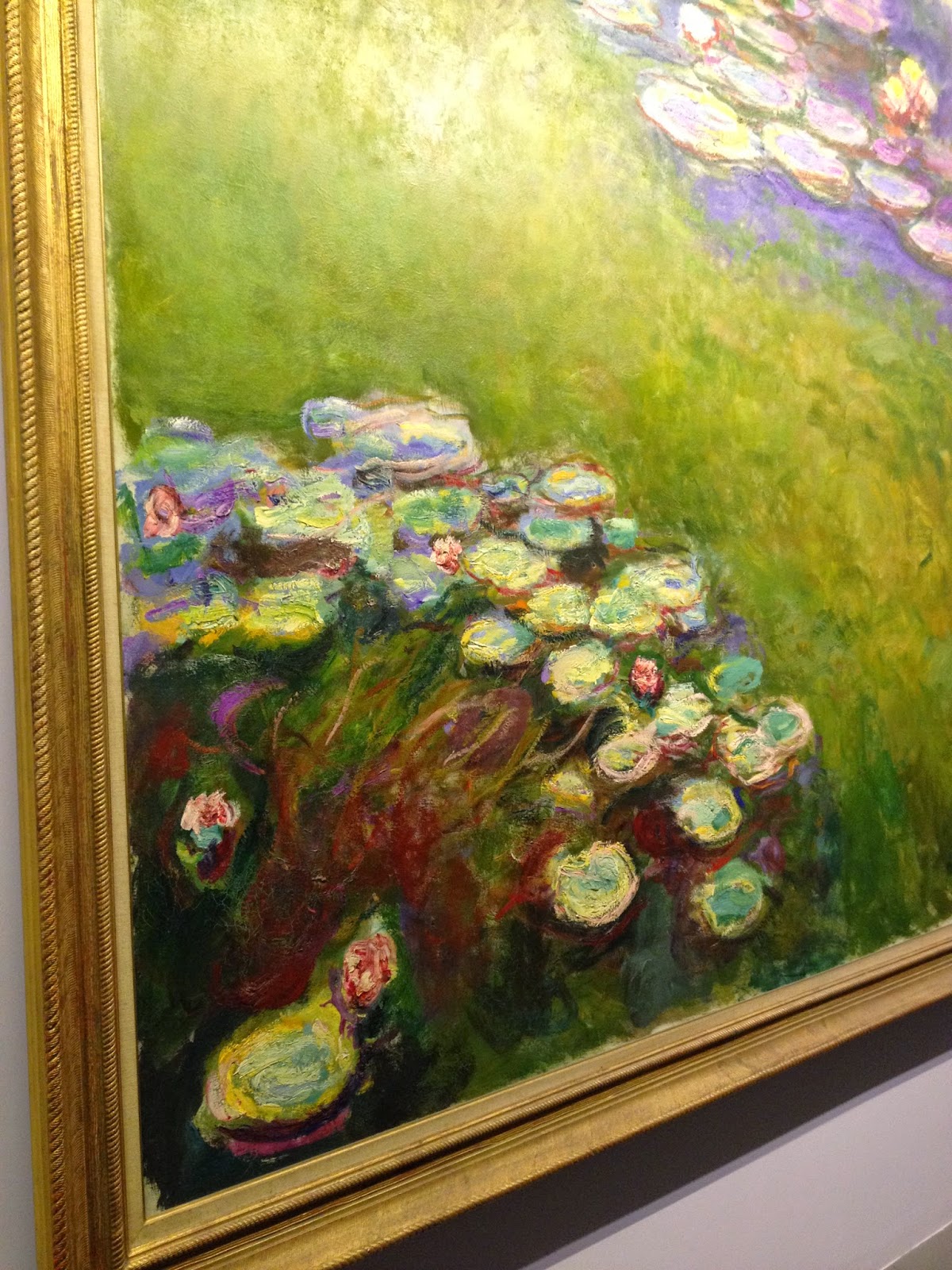