I'm not much of a resolution gal. I don't really know anyone who makes them stick throughout the year. In the past, we've chosen a theme for the year, and have been very successful there. This year I realized there are a few things I've been attempting to do and making space for in my life, and I thought I'd formalize them a bit. Here they are: 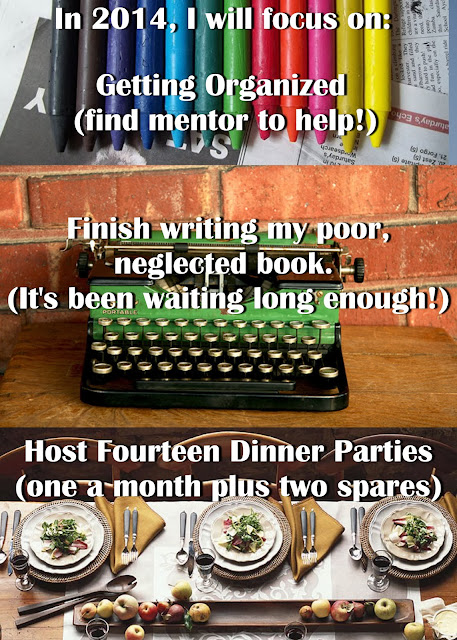 First, getting organized. I'm not OCD in the least and feel very comfortable with chaos. However, I have two children and a husband who depend on me for certain things, and I feel like I need to go back to the drawing board and figure out a system of some sort which is going to make our daily lives more functional. I've been implementing some small but effective changes in the last two months, and I'm looking forward to finding someone who is great with this sort of thing who I can bounce some ideas around with. This first item leads right into the next...
Second, there is a book inside me. It's kind of painful, having it stuck there. It's been there a couple of years, and my half-hearted efforts to get it out make me realize I'm not putting the value on it, or myself, which we both deserve. ﻿This is the year I get it out of me, and work on getting it out in the world. This means I need to be better organized with my time and responsibilities, and why the first thing is so very important.
And third, food. In the last ten days we've had different groups of people over for a meal four times. I've enjoyed spending full days cooking and prepping to be able to feed a crowd (in fact I spent my Christmas Eve birthday cooking for six hours to prep for a big Christmas day non-traditional meal). This may seem like no big deal to many of you, but if the Me of 2009 could see me today, she would not recognize me. I've never enjoyed cooking. But this kind of crazy thing happened to me in late October when I realized that not enjoying cooking was kind of an act of rebellion on my part. I don't want to be domestic or good in the kitchen or do anything which would cause someone to crack a Betty Crocker or Little Susie Homemaker joke in my direction. I take a sliver of pride in being a rebel and iconoclast. What would happen to my identity if I suddenly found fulfillment in preparing meals? But the thing is, I really enjoy eating what I cook. More than I enjoy eating food in most restaurants (*gasp*). Especially when I go off the recipe card and create my own things. And while I still don't relish cooking for just my family of four (oh the monotony of feeding two ever-hungry growing boys!), when I up that number to a party of twelve or twenty, I find it presses all my creative buttons and I come alive. Weird, huh? It makes me crazy excited. This year Michael and I plan to be really intentional and play that "who would you invite to a dinner party" game in real life, and open our home to a wide variety of different people each month.
Every fall around the time school starts, we choose a word for the year, like many people do. It tends to become a self-fulfilling prophecy (the year we moved from Macau to Shanghai our word was Change. Woo-boy, lotta change that year!). This year, I realized we have been in survival mode for way too many years. We're not blooming where we're planted, we're just hanging on for dear life. I can't do that anymore. I just can't. That's no kind of life, especially when we are among the small percentage of people in this world who are 100% living our dreams. So this year, my word is Thrive. I don't want to just survive here in Shanghai (and full confession, most days I feel like I'm barely doing that), I want to blossom and thrive.
I think all three of my goals for 2014 will help me, and therefore in turn my family, to thrive in the coming year. And I must say I'm pretty excited about sitting in this same seat a year from now, looking back on the year and evaluating how it went.
Here's to wild success!
By Heather Rose-Chase at January 01, 2014