A Dolly for Christmas

I've been having some serious issues with Blogger, which may explain my absence here in recent weeks. Because life has been so busy with loads of fun holiday activities, I've not had much time to sit and figure out what's going on, and posting at all is an exercise in massive amounts of patience. Life will shortly slow down a bit and then I can resume posting about our European vacation and Holiday fun.

In the meantime, I would like to point you to my friend Rory's blog, Chocolate Hair/Vanilla Care. Each year her daughter receives just one Christmas gift from her parents, and this year she asked for an American Girl doll. Rory took the amazing step of adding in yarn extensions and styling the dolls hair to look just like her daughter's! See the post here.

In my pre-American Girl doll childhood, Cabbage Patch Dolls were the thing to have. I wanted one so badly, but they were out of reach cost-wise for my family. My grandmother Rose began to create rag dolls in the Cabbage Patch style (though with cloth faces rather than plastic), and her first attempt looked nothing like the much coveted doll. She felt it was a disaster, and tossed it into the sewing room trash bin, where I discovered it later over our Christmas visit to her house. My young and tender heart shattered at the callous way such a creation could be discarded, and I rescued the doll, begging my grandmother to just add hair and please-pretty-please let me keep her forever and ever. It took a lot of convincing, as my grandmother was truly an artist with needle and thread and she felt this was not anywhere close to what she was capable of. However, she promised to finish her and she ended up handing her over on the day of the 1984 Olympics opening ceremony in Los Angeles, which is forever seared into my memory as the day Robin became my constant companion. And true to my promise to my grandmother, I have not only kept her forever and ever, I've actually kept her with me all these years, and all these moves. 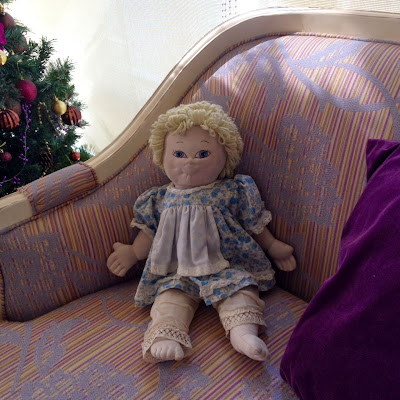 The Disney/Pixar film Toy Story 2 forever ruined the idea that it's okay to keep your beloved childhood toys in a box in storage. I had a small crisis prior to moving to Macau when I put Robin and my favorite stuffed monkey, Nanner, into a cardboard box and taped it up, knowing they'd be in there for 5+ years while we lived abroad, maybe forever, banished into the toy graveyard of long-term storage. Michael, who knows me so very well, and knows my heart (which has grown no less tender over the years), cut the tape on the box, rescued my two toys, and added them to the pile of things to be shipped abroad. If toys do come alive when we're not looking, then I'm certain Robin there has the very best stories of her adventures to tell the boys' LEGO creations!
Within a year or two, Cabbage Patch dolls popularity waned from the white-hot object of the public's desire, and I finally got one on clearance. My grandmother also perfected her technique of knocking them off, and made me several others which had the blocky, stout body of the commercial version. However, never did any of the others make their way into my deepest affection, gaining pride of place on my pillow the way Robin did, and continues to enjoy. Well, not on my pillow anymore, but still in my bedroom nearly 30 years later. All this to say that I hope my friend Rory's daughter gets at least as many years out of her new doll, into which so much love was poured by her mama.
Do you have any special childhood Christmas gifts which you still treasure today? It feels so much more difficult to find that one thing which will become a beloved item with my boys. This year we surprised them with Nerf dart guns, the very first weapons we've ever sprung for. I will treasure forever the look on their faces and the lilt of their excited voices when they tore open the paper to reveal something we've denied them up until this point. They aren't quite sleeping with them a la A Christmas Story's Red Rider BB Gun, but they are always within reach and so far no one has shot an eye out!
Merry Christmas friends and family! Here's to more regular posting in 2014!
By Heather Rose-Chase at December 30, 2013 No comments: 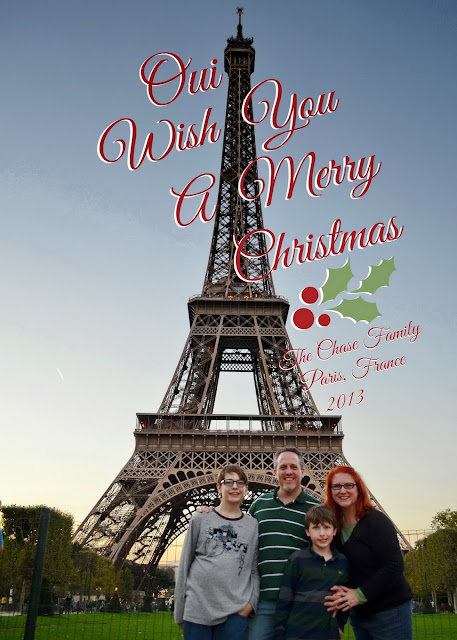 We are simply having a wonderful Christmastime.
I hope you are too!
Merry Christmas and Happy New Year!

A harsh reality of expat life is that you say goodbye more often than most people. This life is like an airport, with constant arrivals and departures.
My son Nathan, at 13, has decided the pain of saying goodbye is not worth meeting any new friends, knowing there is a shelflife on time spent together living abroad. My hope is that now that he and his peers are on Facebook, and have access to other types of instant electronic communication, he'll see that the world is small and with some work no friend is lost forever. But I certainly know how he feels!
When I first arrived in Shanghai there was a group of women I got to know right away. They were unique and diverse and well travelled with amazing stories. Over the past 18+ months, I've said goodbye to all but one, the rest having repatriated or moved on to their next post. Today, however, brought with it the sad goodbye to the final person in that original group of ladies, my friend Kellee. 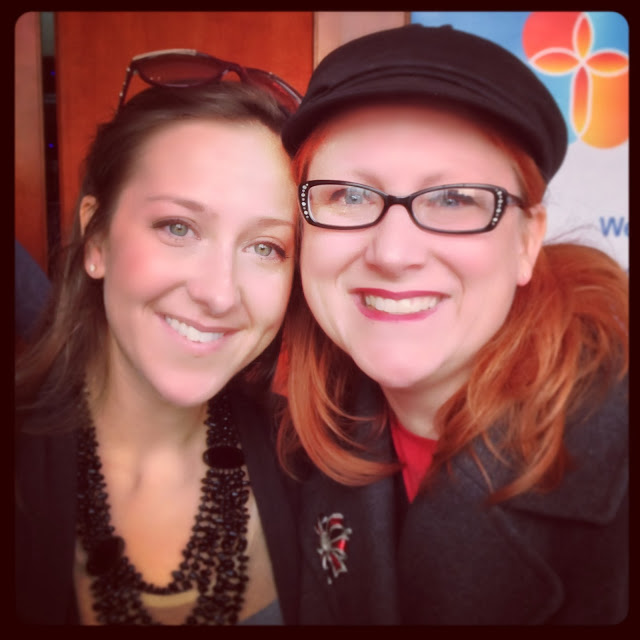 This was such a blow because it was so unexpected, springing up very quickly and out of the blue. She had been in Shanghai for over four years, and expected to remain here for awhile longer. When I met her, she was days away from giving birth to her second daughter, now a gorgeous toddler. She's leaving Shanghai pregnant with her third child, one that I won't get to watch grow and change each week like I got to do with little Nina Sophia.
Kellee was the one who arranged all the meals for me after my surgery this summer, and was a never-ending source of funny stories. While in Paris, we got to eat at the little cafe where her husband Francois proposed, and walk in the footsteps of many of her experiences in France. I thought for sure we'd have lots more years to tell stories and get to know each other. I feel cheated that it didn't happen. Yet I can better empathize with the people who are forever saying goodbye to us as we move on. It stinks.
I made my husband take the photo above as we said our final goodbye. We were both sobbing our eyes out. It never gets easier, especially when every tear shed is part of a cumulative collection of farewells too numerous (and painful) to count.
But like I tell Nathan all the time, with each goodbye there is also the possibility of a brand new hello. I am ready and waiting.
By Heather Rose-Chase at December 09, 2013 No comments:

Good news, our canine friend is back home and back in her usual spot. 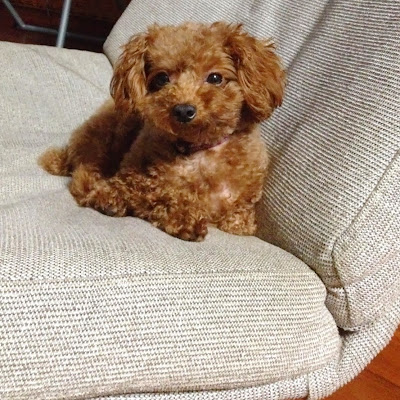 She did not need surgery, Lucy Rocket just had a case of acute pancreatitis and is now on a low fat, high protein diet for the next six months. Considering it took two years for her to get up to her goal weight of 2kgs, I'm not sure a diet is a good thing for this petite little thing!

This whole ordeal has been quite interesting. I carry a little baggage from my childhood, having had a grandmother who loved her animal friends far more than the humans in her life. My little brother and I would get to see her only once or twice a year, and when we'd make the journey south to see her, she'd spend the entire time talking to her Weimeraner dog, Schotse. My grandfather would take my family out to his favorite (expensive) steak house during our yearly visit, and my grandmother would take two tiny bites of her steak, and take the rest home in a doggie bag to feed her doggie, who she was always so anxious to get home to see. This messed with my young head, because of course grandmothers are supposed to be loving and kind and very interested in what their grandchildren have to say, especially children they only see once or twice a year. Right? Not always, obviously.

The experience of having a grandmother whose words and actions told me I was less important to her than her dog made me vow from a young age that animals would never be more important to me than any human relationship. And so it has been my whole life. Flash forward to the present, and here I am, completely gutted and losing sleep over a tiny poodle, the only thing I can talk about, text about, or post photos about on Facebook. My excuse for sounding exactly like my grandmother? Two human boys, to whom that same tiny dog is an entire world. Two boys who have dealt with a ridiculous amount of loss in their lives as we continue to move around the world every year or two. So yes, I was beside myself with worry, but it was primarily worry over the possibility of losing this symbol of home and continuity to two children who I love fiercely. And yeah, a big dose of worry because Lu is my constant companion, my Velcro dog (always stuck to me), and though tiny, her absence for a week was huge. Us girls have to stick together in this house of boys.

I am so relieved we're back on the side of health in our smallest family member! Slumber is restored, and the boys are back to fighting over whose turn it is to take her for a walk. All is right in the world.
By Heather Rose-Chase at December 08, 2013 No comments: