This pile of bikes can be found in a little alcove on the side of our building. It's right next to a grassy patch where we take Lucy Rocket to do her business. I noticed it right after we moved in. 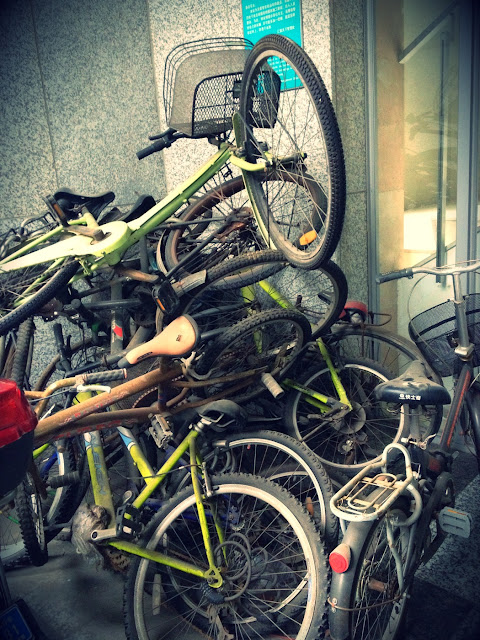 Whenever I would see it, I would think about how sad it was that people would just discard their bikes in such a haphazard manner. I thought of it as a graveyard for rusted and unwanted bicycles. Bikes here are so cheap (seriously, a decent adult bike can be found for under $50 USD), it made me think they are almost disposable, and treated as such.
One evening after dark, I went down and happened to walk past this little alcove and discovered the bikes were all gone. I figured the junk hauler had come along and loaded them up.
But the following morning I passed by once again, and all the bikes were back! As I was standing there, I watched a tiny Chinese woman ride her bike up and toss it on top of the pile. I paid close attention for a week or so, and discovered the bikes primarily belong to the day workers, the housemaids (ayi, pronounced ah-ee) who come each day to mind babies and clean houses and cook for the people in our building. As there is no convenient place to lock bikes up, they just toss them in a pile. I suppose it is both a deterrent from theft and a way to keep the front of our building from looking like a junkyard.
Though my initial impression was of bikes being discarded and disposable, I've noticed that everything here has a far longer usage period than other places. At the point where I'm ready to toss something out due to wear or disrepair, our own ayi will show shock at the waste, rescuing our cast-offs for a second life. Or third life, as much of our household goods and appliances came from other departing expats, who probably got them from still other departing expats.
I hear a lot about waste in China, especially industrial waste. But when it comes down to the consumer level, there is such a small amount of waste. Even the communal trash bin on our floor which serves two flats is no larger than a kitchen waste bin. We brought our large kitchen trash can from Macau, and finding trash bags to line it has been nearly impossible. When I do find them, I stock up like crazy.
I'm trying to be mindful of this longer-than-normal shelf life for consumer goods, especially as the season is changing and I'm starting to put away my summer things and pull out my cooler weather clothing. I look at these clothes I feel like I've worn and worn for over three years, some of which are actually showing wear, and think about how they'd have long been retired to the Good Will or Salvation Army if we were in the States, replaced two-fold to fill up American-sized closets. Though feeling sick of just about everything I own, I hesitate to get rid of anything, knowing how difficult it is to replace with appropriately-sized (and reasonably priced) clothing here in Shanghai.
I've changed much in this area. At least I can see progress anyway. I won't be darning socks and sewing my own undergarments anytime soon.
And where do we store our own bikes? Same place everyone in a high rise building in Shanghai does, right outside our front door, locked to each other just to make it that much more difficult to walk off with them. Not that you can even get into the elevator to get to our floor without a key card, but it helps me sleep at night. 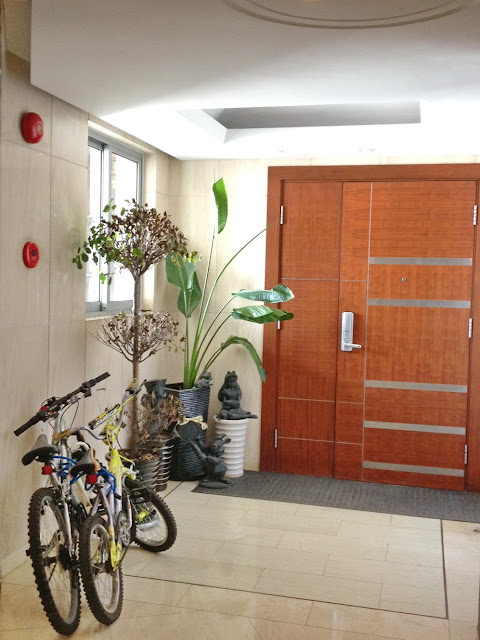 Now let's talk about how many plants I keep killing... pretty wasteful indeed!
﻿
By Heather Rose-Chase at September 14, 2013