I love the look of bridges, when I'm safely on either side of them. We've lived near a bridge or three in every country we've ever lived in. I have quite a few funny stories from my past which revolve around bridges. Taipa, our home in Macau, was an island, so the only way on or off was one of three bridges from the Macau Peninsula. Being afraid of heights, crossing bridges are not my favorite. Even the ones that sit close to the water make me nervous. I've seen too many action films which feature a car spinning out of control and crashing off the side of a bridge. 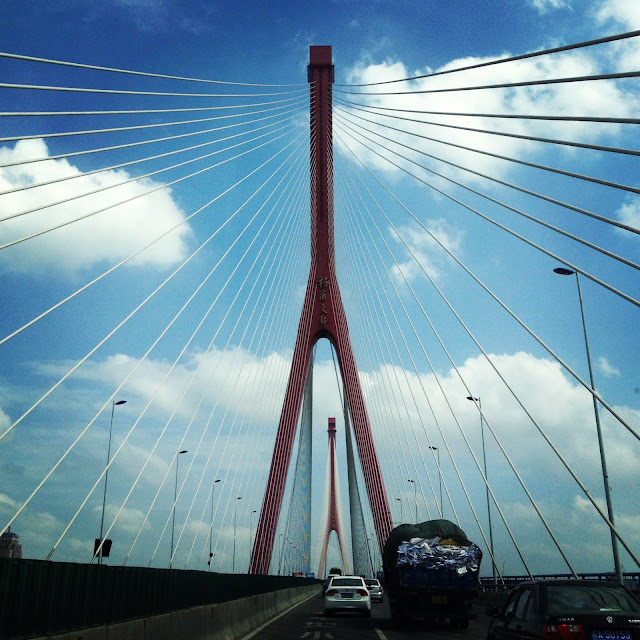 The Yangpu Bridge is one of several bridges which span the Huangpu River. The Huangpu River flows through Shanghai, dividing it into Pudong and Puxi. Pu means river, while dong means east and xi means west. So Pudong, where we live, means east of the river, and Puxi means west of the river. This is my favorite bridge here, the towers rising out of the water reminding me of the wishbone pulled out of Thanksgiving turkeys. It gives me some warm feelings that help whenever we have to go across it. Our home is flanked by two traffic tunnels which traverse the river, as well as two ferry terminals which can get us across in a minute. It's quite rare that we ever actually cross the river on any of the many bridges. Which means I won't be featuring a whole lot of photos like this one. Enjoy!