﻿﻿
﻿
There was this time during my first year of college where I drove solo up to my parents' house, four hours north, at night in a heavy rain storm (sounds like the start of a mystery novel!). To get to their house, you could take a significant short cut off the main highway through a very desolate and rural area filled with oil derricks (seen in daylight in the photos in this post). At some point after I'd left the highway, the California Highway Patrol cut off the exits at both ends of the short cut due to flash flood warnings in the oil fields. These were the days before cell phones (I had a pager though!), so I had no way for anyone to warn me or for me to call anyone if I got stuck. ﻿﻿
﻿﻿ 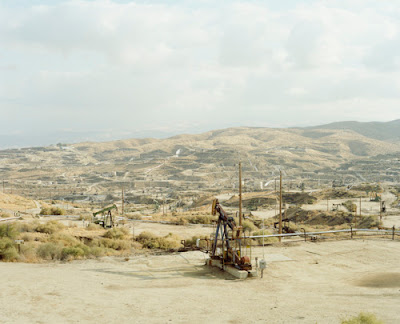 It wasn't too long before I realized I was experiencing the heaviest rain of my life. I slowed the speed down in my little red pick-up truck to nearly a crawl, as my windshield wipers beat at their fastest speed and my headlights only lit a few feet in front of me. The roar of the storm shook the cab of my truck, and the only thing that kept me from shaking myself was my complete ignorance of how dangerous storms like that can be in a region flanked with mountains and covered with miles of soft dirt as far as the eye can see. I was simply wowed by the power of nature.

﻿
My slow speed came almost to a stop as the road in front of me would continually disappear, and large objects like tractor tires and fence posts would zip right in front of my car in the murky brown water streaming across the pavement. It was only the power poles that flanked the road which kept me vaguely on track, I certainly couldn't see any lines on the blacktop. The short cut, which normally took about 45 minutes end-to-end, took me nearly three hours. When I emerged back out at the highway on the other end, I found Highway Patrol cars blocking the road with their lights spinning like beacons in the pitch-black darkness. As I slowly approached, a CHP officer banged on my window and when I rolled it down a crack, he gave me the lecture of a lifetime. I can't tell you if it was tears on my cheeks or the rain streaming in my window which wet my face, but I've never forgotten the mixture of anger and fear and relief that officer projected toward me at the top of his lungs.

Flash forward to this week. On Friday we had to make a quick run to a hospital a mile or two up the road for a vaccination. As we were leaving the house at 3:00 p.m., the sky began to darken ominously. Nathan and I grabbed our umbrellas though Michael declined to bring one. While at the hospital, thunder began crashing, booming and echoing off Shanghai's collection of high rise buildings. Lighting began flashing, and soon there were continuous rolls of thunder with constant lightning temporarily brightening up the grey sky. We seemed to be in the very center of the storm. Looking out the window we could see the fierce wind violently blowing trees on the sidewalk and waves of water blowing horizontally.

Our business concluded, we made our way downstairs to the street in the hopes of finding a taxi home. At first, the rain was just filling up the gutters. We saw this lady, shielding her son from the storm under her skirt. 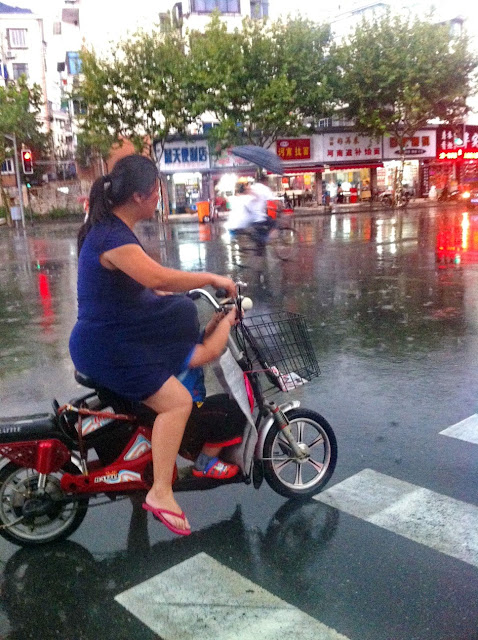 A few available taxis passed us right by, and then we weren't "local" enough to forcefully grab the one that did finally draw near enough to jump in, getting aced by a middle school aged girl and her sister? Mom? who put her in the taxi and then ran back into the hospital behind us.
We tried crossing to a different corner of the intersection, but every open taxi driver would shake his head and speed away. The thunder and lightning continued violently, and then the skies really opened up. As we stood on what had just been level ground, we found the water was suddenly over our ankles. The two umbrellas were no help in keeping the three of us dry, as the rain just pushed at us horizontally and splashed up from the ground. Michael finally dashed after an open taxi, temporarily losing a sandal to the boggy street, and Nathan and I sloshed our way over to it, completely drenched.
Even driving slowly down the road splashed up streams of water higher than the taxi. I felt bad for the people on their bikes and scooters. The water level quickly rose. Please note how in this blurry photo you can at least see the yellow curb, with brown water filling up the gutter. 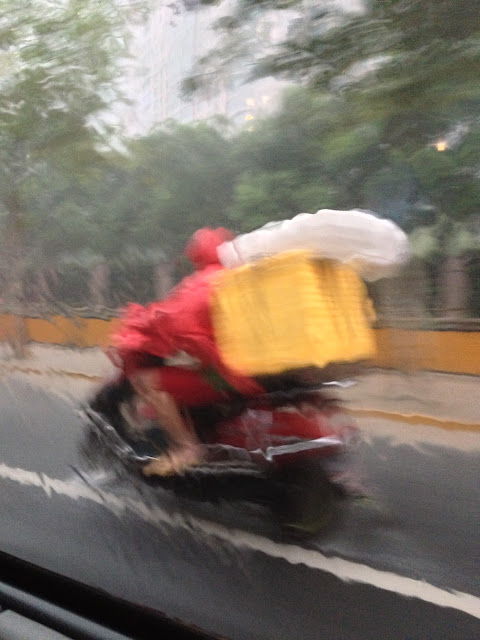 This is the same block, moments later. Notice the curb is completely under water! 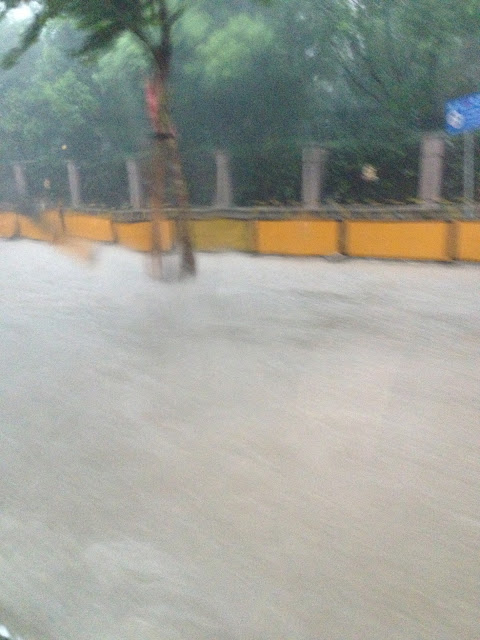 The intersection at our street was completely under water, and street equipment left out was floating down the road. A man in knee high galoshes was wading out to try and retrieve something I couldn't identify. I think we only cleared the intersection by floating. We finally made it to the front of our building, which has a large glass overhang to shield you from the rain as you get out of your car. In this photo, taken outside our taxi, you can see where the standing water is rippled from the falling rain, and where it becomes still and glassy, under the overhang. 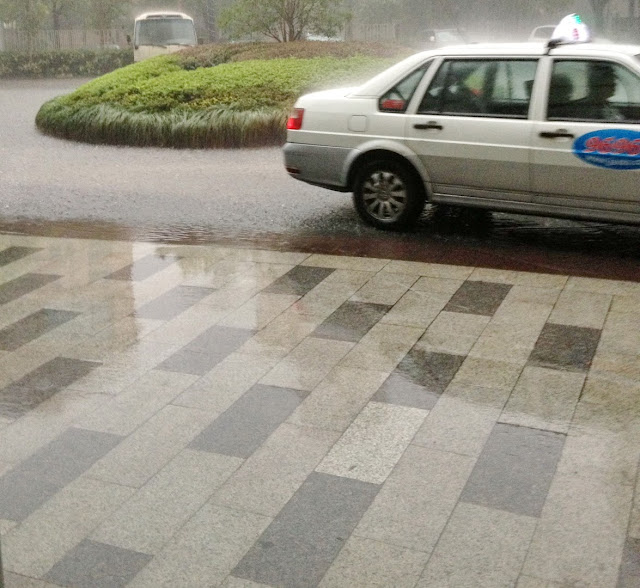 We paused a minute to watch the waterfall of rainwater coming off the edges of the overhang, and in those quick moments, that lake of water had risen all the way to the entry doors of our lobby!
We quickly went inside and changed our clothes, all the way down to our soaked underwear. We compared notes with other friends on Facebook who'd also been caught out in the sudden deluge. One friend in an adjoining complex had to walk down the 52 flights of stairs to the lobby to retrieve their kids from a stranded school bus, as water had somehow broken through into the elevator shaft, creating a waterfall and rendering it completely unusable. Several shanghai Metro lines were temporarily closed due to underground flooding.
This morning we found an article in the paper stating what we could have guessed, Friday had brought the most intense level of rain seen in four years. Our neighborhood actually recorded the highest hourly precipitation of 124 millimeters (nearly 5 inches). In a city made completely of concrete and asphalt, it was just like a flash flood... the water simply had no where to go. 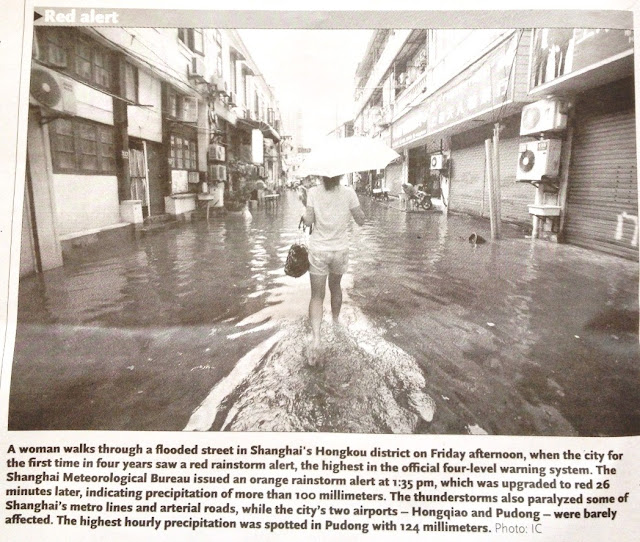 We've seen areas of the Philippines affected by flooding so fierce that entire valleys were under water, and we're thankful that though very intense, this storm ended quickly. I wish I could say all that water left the city nice and clean, but the truth is all the roads the next day were covered in brown sludge, and our windows on the 38th floor are streaked with grey streams of dried pollution.

The good news is we didn't get lectured by anyone for venturing out in a storm warning we knew nothing about!