I'm juggling several photographic projects at the moment. Some are yearlong projects and some are just on going. I just wrapped up a project which documented Benjamin's ninth year of life from his 9th birthday to his 10th birthday while he was standing in doorways throughout the places we visited that year. I'm going to start a new yearlong project with Nathan starting on his 13th birthday, which will revolve around art (if I can talk him into it. He's a hard sell).

I have another project I'm working on continuously during our time here in Shanghai. Shortly after moving here, I noticed all the manhole covers and utility covers are stamped with the year they were created. 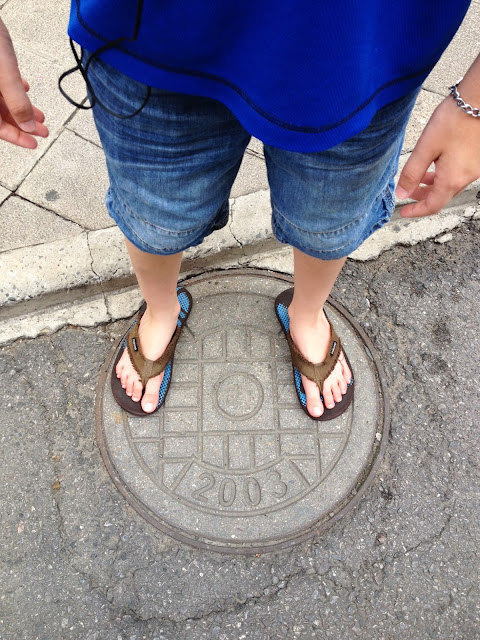 Pudong, the area on the east side of the river, is a relatively new place. None of the familiar buildings in the skyline even existed 20 year ago. So all the manhole covers in this area are from the late 90's or begin with the year 2000. Over on the Puxi side, west of the river, there are older communities which have been around far longer.

I started snapping photos of the covers and then adding the years to a list so I don't end up taking photos of the same years all the time. I plan to just continue this little side project as long as we live here, hoping for as wide a spread as possible in years.

The kids are used to me walking down the sidewalk and then screeching to a stop to pull out my phone to consult my list when I spy a particularly interesting cover. Benjamin has taken to checking out the years as we stroll along, asking if we already have the year he sees.

2003 was evidently a very productive year in Pudong, because it's the most common year we see printed in the concrete. It was also a very productive year for us, being the year we added Benjamin to our family! I took the above photo at his request. I know there will come a day when he doesn't want to be in any photos (I think Nat is right at the border of No Photo Town), so I never turn down an opportunity to snap a picture of him. Even if it's just his feet.
By Heather Rose-Chase at September 18, 2013