In Sickness and in Health

When Michael and I got married, I wasn't really all that concerned with the vows. I just wanted to start our life together as husband and wife. I know so many couples are all about the vows, however. They write their own and struggle with finding just the right words. We were married by the chaplain at the Los Angeles Police Academy, and we used one of his ceremonies. Really the only thing we were adamant about was choosing to honor rather than obey. I don't even have a copy of our vows (or maybe I do... somewhere) but I do know that one common phrase has to do with promising to stay together through thick and thin, good times and bad, and in particular, through both sickness and health. 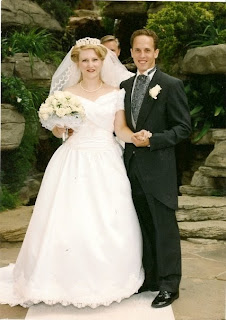 Shortly after our marriage, we came across a book (or maybe it was an article?) that proposed the best way to a happy marriage was to give 100%. Not she giving 50% and he giving 50%, meeting in the middle to make up 100%. But each person giving and doing 100%, not worrying about whether the other person was doing the same. If each person gives 100%, then everything gets covered. It removes the focus from yourself and what you're getting from the relationship, moving it to your spouse and what you're giving. While I've read plenty of ink on marriage since then, I'd say this was the one point I've clung to these past 17 years. What 100% looks like changes from month to month, year to year, but over all, when I give my marriage my all, it inspires Michael to do the same. And when he gives all he's got, I'm encouraged to put all I've got into it.

The tricky part is when the whole sickness part comes into play. Obviously, there isn't much I can physically do while recovering from surgery, other than rest and receive all the care Michael puts into helping me recover.

A few years ago I was very sick and had to have my gallbladder removed. The outpatient surgery was on a Monday, and on Tuesday Michael started a brand new, high stress job which had an initial steep learning curve with long hours starting on day one. This was bad timing for all of us (unplanned), and I'm so grateful my Mom was able to stay with us to help me physically and to manage the household while I recovered (it was a brutal recovery compared to this one). My husband had a lot of stress during the day, coming home to even more stress caused by seeing his wife in significant pain and unable to do much for myself. I needed help to even sit up in bed, to stand, and to get down the hall to the strangely-placed master bathroom. Waking him from his much-needed slumber three times a night to ask him for this help did not make him a happy man. Emotionally, I was a wreck. I'm not sure what was done to me on the operating table, but the bruising all over my abdomen was so significant that I'd sob whenever I lifted my shirt, and Michael was frustrated over my inability to see that bruises fade, they aren't permanent nor worth sobbing over. It was a very rough time, one that I kept dwelling on over this past year as it became clear that other treatments were not going to work and that I'd need an operation in the near future. 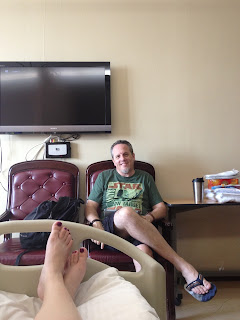 Having gone through that experience in the past, and not wanting a repeat, I sat down with Michael before this surgery to say very specifically what I was going to need help with. What my limitations would be. What the worst case scenario might look like. What we could lean on other people to provide. What I needed Michael to provide. I was honest about my fears and my expectations. And over all, I asked Michael for his patience with me and my body as it healed. For my part, prior to the surgery, I did an immense amount of work to get the house in order, lining up friends to help with childcare, and prepping the part-time ayi who does laundry and housework to let her know I would not be able to do anything to keep things running smoothly unless it could be done from bed.

When I checked into the hospital last Tuesday, Michael came with me, setting up a mobile office in my hospital room. For the first two days, it was nothing but tests and a lot of boredom for me, but Michael was there, answering emails and fielding phone calls from work in an uncomfortable chair so that I wouldn't have to be there alone. He brought me Starbucks from the lobby and edible food to make up for the nasty replica of a food-type-product that hospital tried to serve me. During our conversations prior to being admitted, the two days prior to surgery which I'd have to spend in the hospital getting poked and prodded were not mentioned at all. I thought I could handle them on my own. I figured he'd report to his site office as usual, saving his time away from his desk for the actual surgery day and the days after. But no. 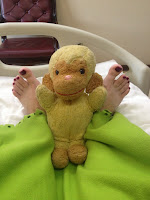 Giving 100% for Michael meant he was going to relieve both my boredom and my growly tummy while I was stuck in the hospital, on top of getting all his work done to meet big deadlines in the office. Seeing the stark white, sterile environment, hearing the crazy-loud noises that hospitals produce at all hours, and seeing the mild panic in my eyes each time some strange new thing happened to me, Michael ran home for supplies. He brought me a bright green blanket (my favorite shade), a dozen new songs on my iPod, and my best childhood pal, Nanner Monkey, who travels the world with us because Toy Story 2 destroyed my life. Or at least destroyed my thoughts on abandoning childhood toys to live in cardboard boxes in storage units while you live all over the world. I have to tell you, these small acts did everything to increase my confidence that the day of the surgery and the recovery to follow would go smoothly, relationship-wise.

There was a really low point last Sunday, when my hopes were dashed about getting to go home that day. I was bruised, swollen, greasy-haired, completely helpless to do anything on my own, and had gone through a very traumatic experience in the morning at the hands of a doctor who didn't communicate well about what he was about to do to me. Tears of frustration and fear were streaming out of my eyes. Michael took my hand and told me I was so beautiful and so strong. It changed everything to just take a moment and see myself though his eyes. I posted part of that on Facebook, and our friend Michael Y commented that our relationship, the good parts and bad, was pure romance. 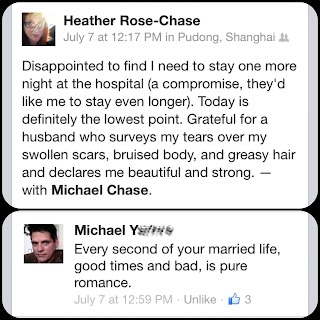 And that's so true. Romance may look like flowers and candy and candlelight to some, but to me, romance is Michael running to get my adjustable, rolling office chair and putting it at the dining room table because it's so much easier for me to get in and out of while joining the boys at dinner, which Michael has completely arranged. Romance is me not complaining and trying to keep a positive attitude when Michael gets home from work even though cabin fever has set in and I'm frustrated with my limitations and being stuck in the house. Romance is Michael surprising me with a hidden stash of Tangerine Jelly Belly candies after coming home from the hospital, purchased the week before my surgery in Hong Kong, knowing I am very, very hard to surprise. Romance is finding beauty in the brokenness, and loving each other through the good times and bad.

If you'd asked me what romance, or loving someone through sickness and health looked like when I was a 21 year old bride, I'm sure I would have described it differently. I had no idea that the road to a strong and happy marriage would take so much work. But seventeen years later, I can see the dividends of that hard work, still weak at the knees over the way Michael looks at me so full of love, even when I am greasy-haired, scarred, and puffy with tears in a hospital bed so far away from where our story started.

I love you, Michael Chase. Right now giving 100% involves laying in bed and writing all this down between naps, while I wait for you to come home and do everything else I can't. I don't love the sickness part of marriage, but it makes me so grateful for the healthy part. Every day I'm getting a little closer, as are we.