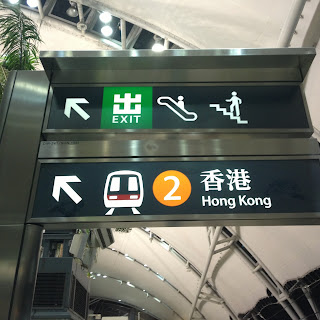 Hello friends! We're back from our week in Macau and Hong Kong, where Michael worked while the boys and I played. It was a strange and interesting week and I'll save the stories for another day.

While we were gone, Mother's Day came and went (happy Mother's Day to you Mom and Carol, and to all you Mamas out there!), and my friend Rory published her annual Mama and Me Share the Hair post on her blog, Chocolate Hair, Vanilla Care. This was the third year my oldest son and I participated, and I told Nathan (almost 13) that this would probably be our last year. He was absolutely flabbergasted! In fact, actual tears sprung to his eyes and he said he wanted to do this with me forever. Wow. Alrighty then. It's funny how something that started off as a one-off has become a treasured tradition for my squirrelly boy.

Rory's blog was started specifically to share how she used hair to bond with her adopted newborn daughter, now a kindergartner. It has been fun to bond with Nathan these last three years over our hair. We are unique in the family, having thick, straight, ultra-fast growing hair that doesn't do much other than lay there. Everyone else in my family and my husband's family have waves and curls. So maybe it wasn't a complete surprise when Nathan asked if this year we could please do curls for our matching 'dos.

While Michael took Benjamin off to soccer practice for an hour, I borrowed a friend's curling iron and used a ton of hair spray and styling products and still our "curls" look imaginary. But despite the mediocre results, that hour of bonding with my son was priceless.

Nat has been on what can only be described as a hormonal roller coaster of late, making my head spin with the rapid-fire mood swings. While friends say unhelpful things like "be glad you don't have a girl, it's so much worse," I'm reminded that since conception Nathan has been the most extreme child at every stage of his life. Why would the onset of the teenage years be any different? So really, the hour of playing with our hair was the most precious of Mother's Day gifts... lots of laughter and ridiculousness mixed with incredibly deep conversation about personal hygiene, girls, and puberty. The "curls" were completely gone within two hours, but I will hold on to the memory of that special afternoon together for all time.

Thank you to Rory, for the amazing example you are to other Mamas, and for an experience I'll treasure always. No, I don't have a girl to do traditional mother-daughter things with. And my own mother is the ultimate tomboy while I was a girly-girl through and through, so we never did things like tea parties, shopping, or mani/pedis together. Instead, she and I bridged the gap to find other things to do to bond (which generally had to do with road trips and hours in a car together). And while I'm nowhere near the girly-girl I was before I became mother to two boys, it's so much fun to find something to bridge the gap with my ultimate boy, Nathan.

To see this year's entry, go here. For the first year, go here. And for the second year, go here. Here's a couple of outtakes on the iPhone. By the time Michael got home to take the official photo about 15 minutes later, we were half as curly! 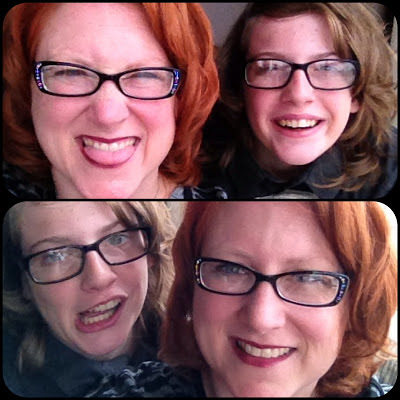 Two days after this, Nathan wanted to chop off his long locks. I think having the Shanghai taxi drivers tell me what I beautiful daughter I have was getting on his nerves. And since hair is not a battle I'm ever going to fight with my kids, I took him in for a "short" hair cut. 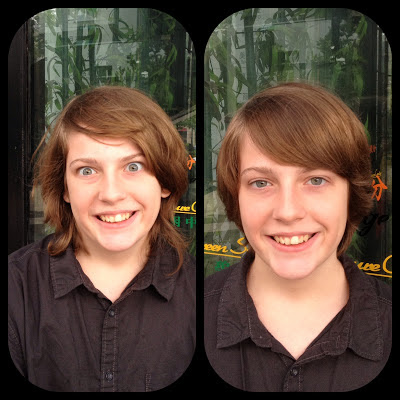 He loves it, and has taken to carrying a comb in his pocket so he can pull it out every five minutes to smooth every strand into place in the reflection of anything shiny we pass. After a lifetime of not caring a bit what he looks like, he is obsessively asking if his hair looks okay several times an hour, showing honest distress if I pause even slightly in giving it praise. Oh yes, the teenage years are going to be fun.