This morning Michael sent me a text with this image: 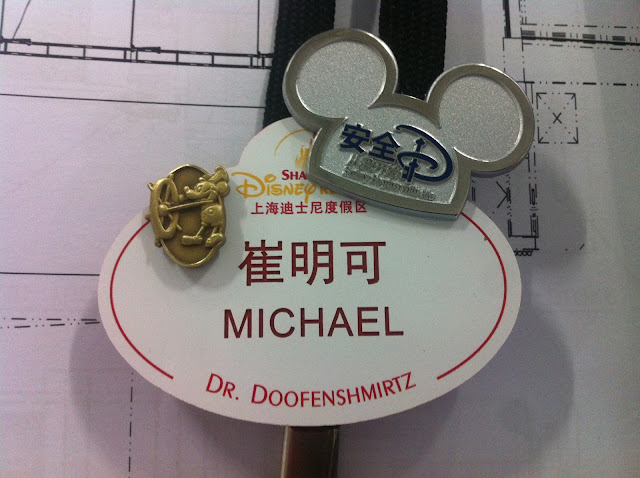 Now I know most of you reading this won't understand the significance, so I will draw your attention to the Mickey Mouse as Steamboat Willie bronze pin on the left. That is a one year pin, given to employees of the Walt Disney Company after their first year of service. The next year pin doesn't come until five years of service. Michael and I had a good laugh over this text, because this is actually Michael's fourth one year pin. Over all, he's got over 15 years of cumulative employment with Disney around the world, but every time the project he's working on ends, he moves on to non-Disney projects outside the company. And then the next time they open a theme park somewhere in the world, they call him back again and he starts from zero, earning his one year pin all over again.

I have a one year pin of my own somewhere in storage in a box somewhere in America. The interesting thing is that all the people I started with on my first day just got their fifteen year pins last year. Two paths diverged in a wood and all that... I was only with the company for three years, leaving when we had Nathan and moving to Japan so Michael could open Tokyo DisneySea. I wouldn't trade the life I've actually had, roaming around the world, for a pin that says I've stayed at the same desk for that same amount of time. But I'm in awe of and salute my friends who have!

All Disney employees get a name badge, and depending on which park or line of business, they may have special little additions. In Anaheim they let you put the city (or country) where you were born. Here in Shanghai, where the characters are being introduced to a whole new audience, they asked everyone to put their favorite Disney character on their name tags (mine would be Alice, The Mad Hatter, or the Cheshire Cat of course). Michael and I thought long and hard on what should go in that space. The obvious answer he always gives would be Tigger (from Winnie the Pooh) at corporate events where they do ice breaker games that require a favorite character answer. But we wanted to find something more obscure, more unusual, more quirky. So we actually made a list.

Our family favorite Disney Channel show (which we don't get in Shanghai and didn't get in Macau) is Phineas and Ferb. The writing on this animated show is incredible. It's not stupid, the comedy comes in layers that skim the surface but also go deep, and it highlights creativity and innovation which I can get behind in a major way. Plus, the show always has at least one musical number. What's not to love? One of the best characters on the show is the bumbling evil villain, Dr. Doofenshmirtz. His plans to destroy the world (or just random and obscure parts of it in the "tri-state area") always fail in hilarious ways. He comes up with new machines (which always end in "-inator") that do crazy things to foil his nemesis, Agent P, whose alter ego is the lovable pet, Perry the Platypus. My favorite crazy contraption is the "Evaporator-inator" which is made completely out of recycled materials. Dr. Doofenshmirtz says about it, "It's both green and evil... I call it greevil!"


Once we put Dr. Doofenshmirtz on the list, he was the obvious choice. Of course no one in Shanghai has ever heard of the character or the show, so it does make for interesting conversations! It certainly has that quirk Michael was hoping for in a sea of Mickeys and Donalds in his local office!

Congratulations to my awesome husband, on earning yet another one year pin from the Disney company. And congratulations to me and our boys for making it through one more year of this crazy adventure around the globe for the sake of his career. It's been an E-Ticket Ride all the way!
By Heather Rose-Chase at May 27, 2013