The Power of Failure

Several years ago I had the great privilege of facilitating a series of workshops on creativity throughout the state of California. I also taught an eight week class on living a creative life. Here in Shanghai I was able to speak at an event on creativity. Creativity is a great passion of mine. I actively value it, celebrate it, look for it, and help other people do those things as well.

One of the biggest points I made in every workshop, class, or speaking engagement on the subject of creativity is the power of failure. A few thoughts on failure...

Failure teaches us lessons more difficult to learn if you only ever have successes. I'm thinking specifically of humility... Can you learn humility if you never fall flat on your face? Maybe. But failure teaches it far more effectively. And tenacity. Can you learn to hang in there and keep trying and pushing if you succeed the first time you try anything?

Failure helps us grow in so many areas because we are forced to work harder for our success. I know I become far more grateful when I've tried and failed a few times and then finally get it right. I take less things for granted. Huge failures which seem catastrophic can become the impetus for enormous positive change that could never come about while things seem to be going along swimmingly. We think if something isn't broke, why fix it, even if "fixing it" means making life easier or better in the long run.

Failure means we are DOING something. If you never fail, you're probably stagnating. You're not risking anything. It likely means you're not having great successes either, you might just be playing it safe.

I've had some failures which I thought were on the big side, and though painful, I still celebrated them because I was out there trying and stretching and growing and very much living my life to the fullest. But this last month I had a failure that feels a little raw and painful and I'm having a hard time practicing what I preach.

I took something on at the beginning of the year which I thought was going to be very different than the reality of how it turned out to be along the way. When things started going poorly, I made bad choices and dragged my feet on speaking up on my limitations until it was too late for anyone else to help me. In the end everything looked amazing, many people were happy, and I was able to use my gifts, talents, and education to do something spectacular. It isn't obvious how I failed unless you were along for the whole ride with me.

The truth is, I put some friendships in jeopardy by not being able to keep my commitments. I put my already somewhat fragile health at greater risk by pushing myself when I should have been resting, causing my illnesses to be prolonged. I came close to damaging my marriage and had some terrible arguments with the person who certainly didn't deserve my wrath (thankfully my husband also values the power of failure and loves me very much). I got seriously off track on another major responsibility which may now force two other people to fail at something quite important, likely resulting in a significant financial penalty that I'll have to carry.

Tallying up the cost vs the end result, I realize that on the surface it may look like I did something awesome (and I'll share images of the end result next week), but really when you look at the complete picture, I failed and failed pretty hard.

So though I'm not at the point of celebrating my failure, I can at least recognize the important lessons I learned which are so incredibly valuable. Maybe the most important lesson is remembering my priorities, and then making choices that allow me to honor those things that are arguably the most important to me. Another good one is that we're always going to let someone down in life, but we frequently get to choose who we're letting down. I actively chose to let down the people I love most in life, instead of letting down people I barely know. That won't happen again if it is within my power to control.

A final point about failure and creativity: failure forces you to flex your creative muscles which can positively impact every area of your life. Though it's going to be tough to recover a couple areas from my recent big failure, I'm going to need to get really creative in finding a solution to digging my way out. And if I had not failed so spectacularly, I would not now have the opportunity to embrace my passion for creativity in quite this way. Already some of the solutions I'm toying around with involve forcing me to grow in my weakest areas. Maybe that is cause for celebration after all.

I'll close with a photo from a mug at my favorite corner coffee house. Wisdom according to Homer Simpson (which should generally be avoided): 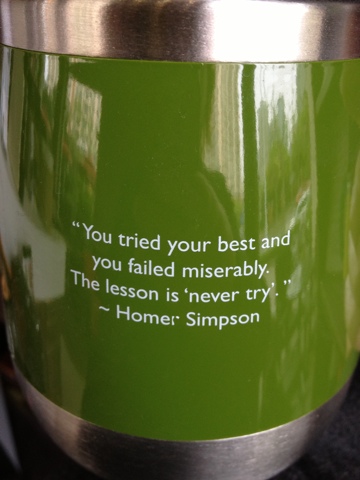