Our pre-Christmas trip, if you recall, was mainly to be able to visit old friends, including a family we've known since we lived in the San Francisco Bay area who were coming to Asia for a visit. They booked the trip back when we were still living in Macau and they were shocked when we broke the news we were moving away. A flight from Shanghai to Hong Kong or Macau is about two hours, and runs about $200 round trip (around $75 USD if you get in on a great deal from Spring Airlines). We have several friends in Hong Kong who we usually call on to lend us a room, but since this was part of our family Christmas gift, we sprung for the luxury of the Disneyland Hotel. Good call in my opinion!

Our friends were a bit sad to miss out on visiting Macau, which is just an hour ferry ride away, so when I mentioned that we'd be heading over on Saturday, they asked if they could tag along. Um, yes! There's no role I cherish so much as tour guide, especially for a place I grew to love like Macau.


This was our first trip back since we moved away, and it was a bittersweet experience. I felt very frantic and detached from myself, and had to continually force myself to be in the present instead of daydreaming about the past. It was quite obvious that Macau is going to continue to have a special place in my heart for a long, long time.

I planned an itinerary for our party of ten which would include three main areas of Macau: the Ruins of St. Paul and the Monte Fortress on the Macau Peninsula, Fernando's Portuguese Restaurant on Hac Sa Beach on the island of Coloane, and a visit to one of the major casino complexes, the Venetian. Our friends got tickets to see Michael's former show but we opted to sit that out, heading back to Hong Kong early to catch another show, Les Miserables, which opened in theaters in Hong Kong three days before it opened to the rest of the world. Lucky us!

We took the quick and efficient city buses everywhere we went, to accommodate our big group. At one point I was sitting in the front, facing our friends who were all in the back of the bus with a crowd of passengers between us. I kept pointing out things of interest, and all the people sitting in front of them were tilting their heads, wondering what was up with the crazy lady gesturing and talking loudly to them in English. I make a fool of myself in Asia every day, this day was no exception! 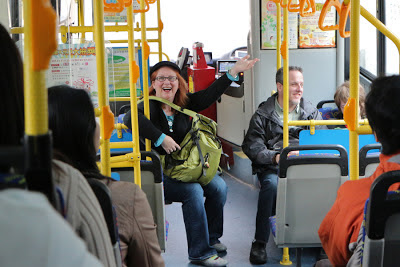 On the way up to the Ruins of St. Paul you walk past a street lined with bakeries and shops. My friend's father had requested a certain type of candy, so we stopped in to pick some up. One of the popular things to buy in Macau is sheets of preserved meat called bakkwa. The ladies in the shop stand out in front, cutting off little pieces with scissors for you to sample. This stuff is ridiculously good, and I'm sad that I only got the nerve to sample it halfway through our time living in Macau! We bought some spicy beef to bring home, while our friends got a variety of flavors (which I later found out they had to abandon in US Customs, no meat products allowed to be brought into America!). 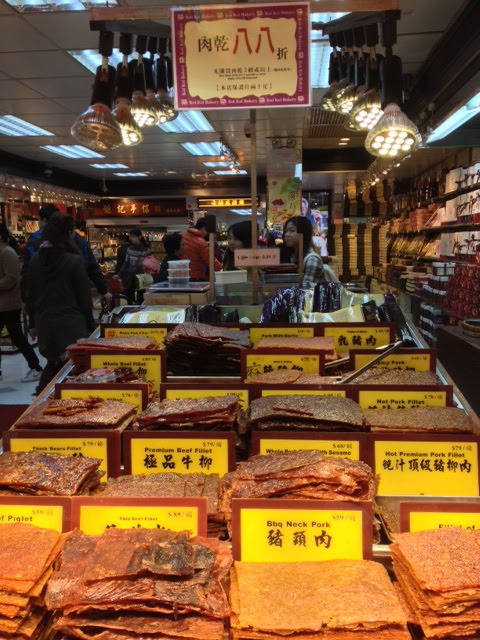 We continued up the tiled alleyway and arrived at St. Paul's. Here's me and my Chinese sister, Cezanne. 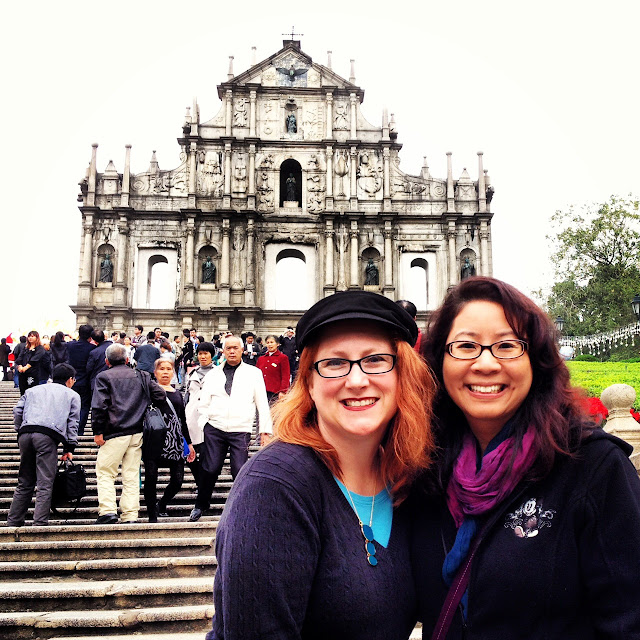 An entire decade has passed since we last saw each other, but as it goes with old friends, it could have been a week by the way we just picked right back up where we left off! Here's the Ma family and the Chase family, plus an extra friend of theirs (the girl with the blue bag over her shoulder): 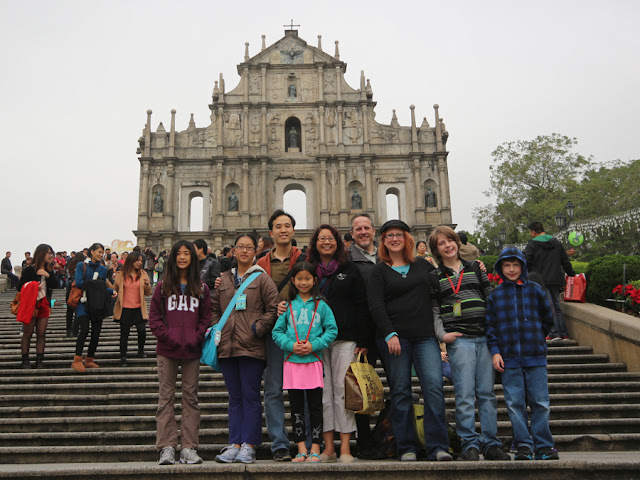 We explored around the Ruins and up along the Monte Fort, with great views across the border into China. There is a terrific museum of Macau inside the Fort, but it's worth spending a few hours which we simply didn't have this trip.
Next we caught the bus that goes from one end of Macau to the other, heading to the south end of Coloane Island for lunch at Fernando's. Macau was formerly a Portuguese colony, and Portuguese is still one of the national languages (the other being Cantonese Chinese). There are many places in Macau to get Portuguese food, but none quite the experience as Fernando's. They have no A/C, no heat, no high chairs, no ketchup, and no iced tea﻿ (and have signs all around the place telling you of those facts), but that's all part of the charm. I have a friend from England who lives right next to Fernando's and she'd planned to join us for lunch, but the night before she went out dancing and overdid it to such a degree that she ended up with a hugely swollen knee and couldn't even walk. She did send her husband and boys over, which was nice! The boys all ran around playing together, also picking up right where they left off. 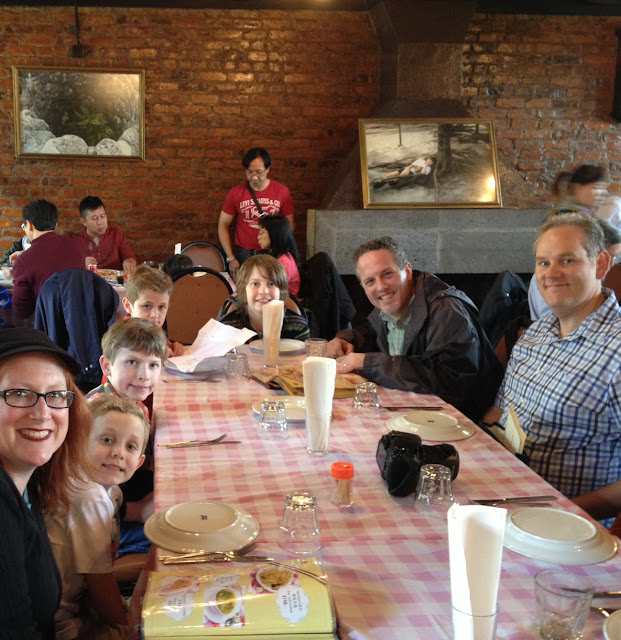 After lunch, we took a bus back up to the Cotai Strip to check out the Venetian, the largest hotel in the world. Our friends walked around marvelling at the canals and gondoliers while our family ran over to see the Human Bodies exhibit. 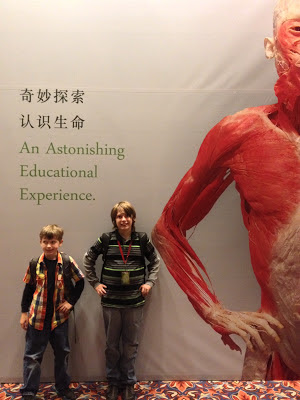 It's filled with preserved human bodies and body parts, and it was an absolutely incredible experience. There was a similar exhibition years ago in America which we missed, so it was nice to be able to see this one and show the boys about the inner workings of their bodies. Their favorite parts were the babies, shown from the tiniest fetus through a full term baby (which I'm not going to post here as it might be disturbing to some people), and the display of a healthy set of lungs along side a set of black, cancerous lungs with a box for people to deposit their cigarettes! The whole thing was slightly gruesome yet beautiful, and truly fascinating and perfect for two boys who live on grossing people out.
There is also an exhibition of artifacts from the Titanic in an adjacent hall, and I wish we'd had time to do both! The exhibitions will be there through February 24th for anyone who will be traveling to Macau over Chinese New Year.
Our last stop was to deliver our friends at the City of Dreams theatre so they could watch Michael's former show. It was a sad goodbye to the Ma family for me, not knowing if it will be another decade before we meet again! Before catching our ferry back to Hong Kong, we met Michael's old assistant, Jennifer, for coffee right outside the theatre. We reflected on how she was such a huge help to us when we had our hospital visit right after arriving in Macau, and during the entire time we lived there. 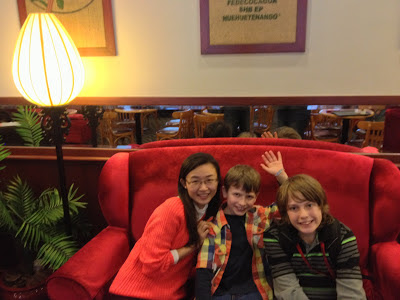 Then we raced over to the ferry terminal and managed to catch an earlier sailing. This was a good thing, as the sea was especially choppy and it took longer than an hour to get us to Hong Kong. Had we gone later, we surely would have missed our showtime for Les Miserables! It was actually the worst ferry trip we've ever taken, and I don't exaggerate when I say we've been on that trip at least 30 times, probably more. The sea was so choppy that the boat was catching air between waves. Everyone around us was violently throwing up, filling barf bags with the contents of their stomachs. We were completely surrounded with vomit. It was so gross. I expressed quite a bit of gratitude that we are not at all prone to motion sickness! Several friends pointed out that riding roller coasters, surfing, and swimming are not common in Chinese culture (in Mainland China), and therefore many Mainlanders are far more likely to experience motion sickness since they don't grow up having experiences that may cause you to be sick. I don't know if that is true or not, but it was certainly an intense ninety minutes! So glad we all had iPods and headphones to drown out the sound of the retching! Ugh! 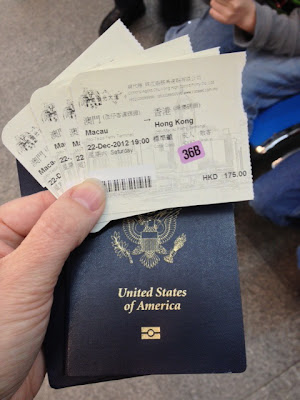 As we went back through immigration in Hong Kong, we realized we are down to only four blank pages in our passports, with quite a few more years to go until they expire. Sounds like a field trip to the American Embassy in Shanghai to get more pages will be in our very near future! We've got quite a bit of travel planned for 2013, can't let a silly thing like no room for a visa hold us back!
By Heather Rose-Chase at February 04, 2013