The Man from Tallahassee

I'm a huge fan of the television show LOST. I wrote a piece nearly three years ago about the things I would miss most about the show here (Go ahead and read it. My final point ended up being very, very true).

In Macau, we started watching the series again with a whole new group of friends. I make a terrible person to watch it with, as I would always jump or suck in my breath or scream or cover my eyes or do something to spoil it for the friends of mine who'd never seen it before (sorry Liam). I was so sad to move away before we completed the whole series a second time.

One of the best episodes in the television show came about halfway through season three, called The Man from Tallahassee. I don't want to spoil it (don't click that link unless you've already seen it or never plan to as it spoils a lot), but it marks a huge turning point as the audience gets to see something quite mind-bending about the Island where the characters' plane crashed. Okay, yes, much of the show is mind-bending, but this is the first time I remember screaming, "WHAT?!?" along with the other people in the room watching it with me. Both times.

Part of our recent trip to America included a drive from my parents' new home in the Gulf Coast to the city of Orlando, Florida. When I checked our route on a map, I saw that we'd be driving through Tallahassee. This made me ridiculously, and yes, somewhat stupidly, giddy. When we left my Mom and Dad's house, I insisted on sitting up front (I love road trips and haven't had one for nearly two years! No spending the ten hour drive reading for me!). Every time a sign came up that listed the number of miles until Tallahassee, I would cheer and yell and take a photo. Over and over again.

﻿
This grew old for everyone else very quickly. But not me! My enthusiasm only grew by the mile! My Dad asked me to please explain, which I tried to do (no, he's never seen the show and is not likely to). He wondered if there would be some monument to the television show or something else that I was especially excited to see. Nope, just wanted a photo of the sign that said 'Welcome to Tallahassee' and the warm feeling of knowing I'd been there. Some girls get worked up over seeing their favorite band or movie star. Not me, it's all about the location!

As we grew closer, we made a quick stop for fuel and sandwiches and a change of driver. My Mom was at the wheel now, and she was just as confused by my enthusiasm over Tallahassee as my Dad had been. Traffic began to pick up, and we found ourselves surrounded by long haul truckers with lots of cargo. Right as we pulled across the city line on the highway, I saw the 'Welcome to Tallahassee' sign... at the end of the first off ramp! I burst out laughing at having missed the sign, and my parents asked if I wanted to turn around and get a second look. No thanks, we were making good time. I was sure there would be something else with the name of the city on it by the side of the road.

And indeed there was! We saw a large water tower by the side of the road with a big 'Welcome to Tallahassee' emblazoned on the side. I would get my photo yet! And just as I had a clear shot, a large truck pulled into it. My Mom sped up, and I hoped I could just get a shot from right beneath it. Which I did. 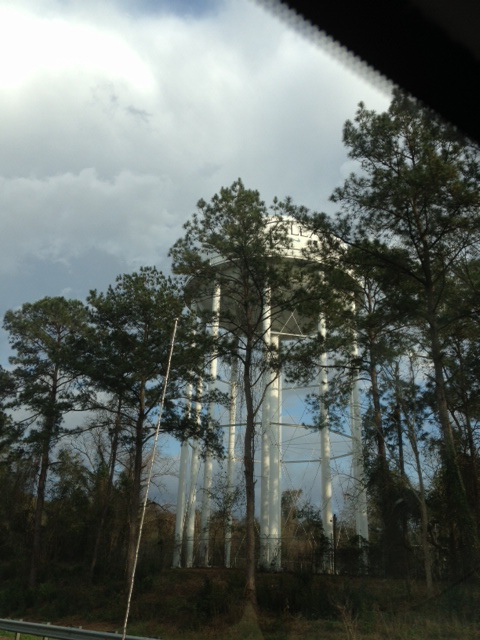 The good thing in all this? I love to laugh. I live for laughter. I try to find the humorous in everything, especially in my own silliness. I don't want to take everything so seriously that I can't laugh. And you guys? After missing the city limit sign and taking that tree-filled photo, I burst into laughter so long and loud that tears were streaming down my cheeks and I could hardly breathe. My boys in the far back of the van pulled their earphones out of the ears long enough to tell me to simmer down, and my Mom again asked if we needed to pull off and go back. And miss out on having this story of completely missing the sign that was only important to me? No way. The laughter (both then and now) was so much better than having a 'Welcome to Tallahassee' photo in my collection. Way better.
By Heather Rose-Chase at February 27, 2013