One of my favorite photos of the kids was taken in 2005, the day after we moved to Hong Kong from Los Angeles. We'd all arisen well before dawn and ventured out into the city for a morning of exploring. We returned home just after noon and, quite stupidly, decided to take an hour's nap. Michael and I dragged ourselves from slumber to go wake up the boys (Ben at 18 months, Nat at age 4) and to our great dismay found they were little lumps of pliable but snoring clay, impossible to wake over the next several hours, no matter what we tried. And then we paid for it that night when there was not a thing we could do to make these children fall asleep late into the night, even though we were on the edge of delirious fatigue and near-rage ourselves. 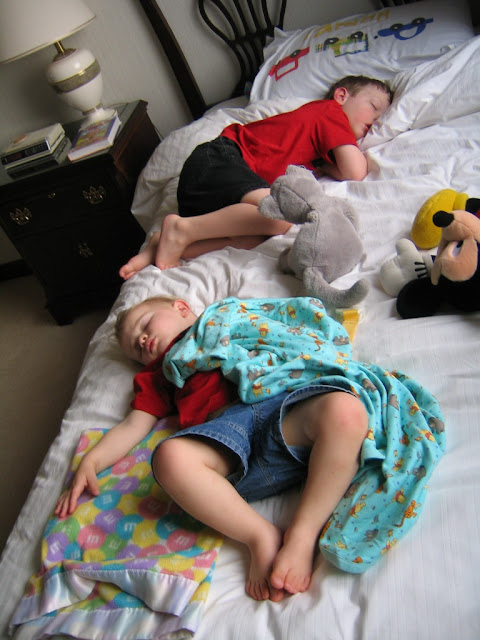 After that experience, I realized napping prolongs jet lag and should be avoided at all costs. The best "cure" in my experience has been lots of sunlight and fresh air and plenty of non-caffeinated hydration. With structure-craving kids, jumping immediately into some semblance of your normal schedule makes all the difference, especially when they are too young to fully grasp why their bodies are feeling so tired. 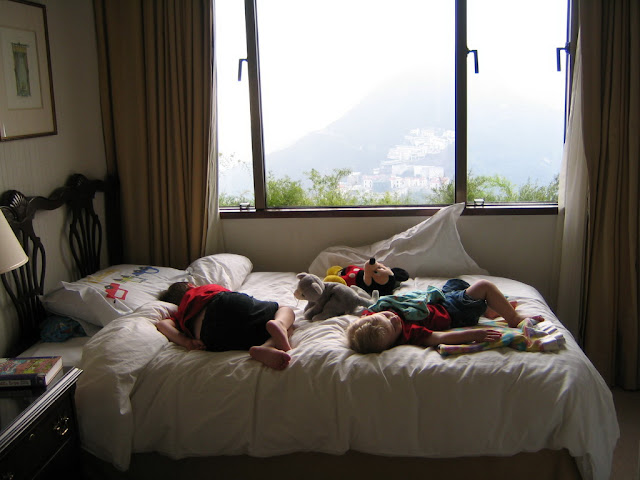 Yesterday was our first day back in Shanghai and I was fully prepared to fight jet lag on my children's behalf by keeping them wide awake and away from their screens (television and iTouch) so their little retinas could register plenty of sunlight. We took a long walk mid-day and I force fed them healthy foods and lots and lots of water. There was not one complaint of being tired nor a single grumpy attitude to be found in the Chase household. I was overjoyed.
At about 6:00 p.m., I wandered from my office into the living room to find my littlest one completely lost to us here in the land of the wide awake, snuggled up on the couch with his plush puppy. I have no idea how long he was snoozing there, but he missed dinner and I didn't have the heart to wake him while the rest of us sat around the table eating take-out BBQ and staring at him while he slumbered. 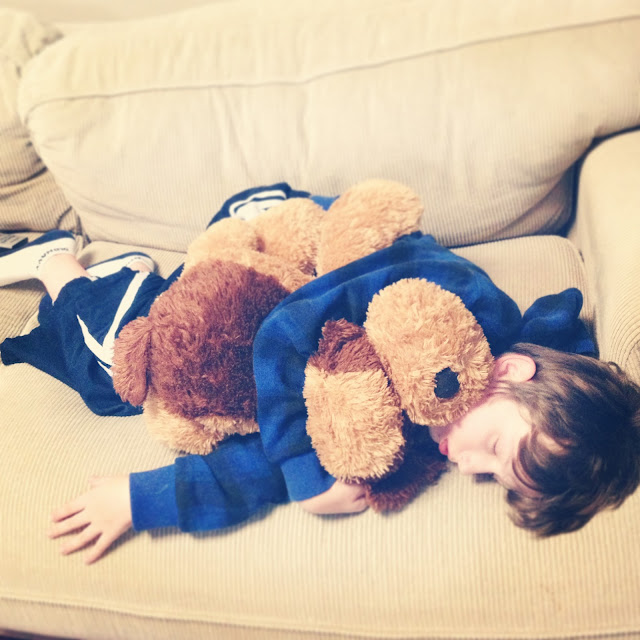 At 7:00 p.m., Lucy Rocket was delivered back into our arms from the kennel. While Michael and I sleepwalked Benjamin into his pajamas and into bed, Nathan took the opportunity to lay on the couch and snuggle with our real life puppy. Then we lost him to dreamland as well. 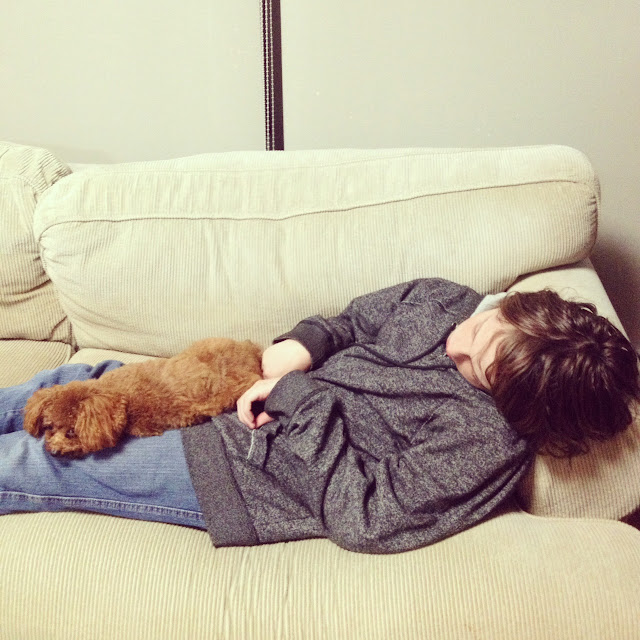 This morning they arose quite early (as did I, but they still beat me). I'd booked doctor appointments for both of them today, as Nathan was complaining of ear pain (which he always does when we fly), and Benjamin was having a nasty cough which sounded like something that should come from a lifelong smoker and not a healthy nine year old boy.
Off we went, with my expectations that Nat would be told he was perfectly healthy and Ben being prescribed some cough syrup. Expectations rarely line up with reality though, do they?
Nathan actually has a raging double ear infection, with one ear filled with blood. Benjamin, my child with the congenital heart defect and kidney issues, actually has pneumonia. I'm positive my reaction was to gulp a few times in shock, because for the last two weeks in America, my loved ones have asked after Ben's health more than anything else. And with a wide smile and full gratitude, I've been able to report our boy has been incredibly healthy for our entire time living abroad, unlike the rest of us for whom simple infections are quickly cleared up with rest, fluids, and perhaps some antibiotics. ﻿
Nathan was referred to the ENT, prescribed a decongestant, an ear ointment, and some antibiotics (side note: he's dangerously allergic to penicillin, and when I was demanding to know what they were prescribing him to ensure we would not be putting him at risk, I was told that penicillin-based antibiotics are rarely prescribed in China anymore due to overuse and misuse, resulting in penicillin not being effective to treat bacterial infections here anymore. Good news for Nathan, but bad news for everyone else, as those germs continue to grow stronger necessitating stronger antibiotics!).
Benjamin had a huge array of tests done including a painful blood draw (he cried, it was all I could do to not cry myself), and I had a panicky moment as the doctor was discussing treatment options including a possible hospital stay. Remember my own recent hospital stay, and how I finally decided I had to relax and let them take care of me when they wouldn't tell me my test results or what medications they were giving me? NO WAY would I be that calm if it was my youngest child getting the same treatment. China has never seen a mother bear like this one when it comes to Ben and hospital stays or his medical treatment.
Fortunately for all of us, the decided upon treatment for now includes strong medication administered at home along with a visit to a specialist and repeating some of the lab tests in a few days along with another chest x-ray. We're coming up on Ben's annual pediatric cardiologist check up, and it was decided to go ahead and push the visit closer to make sure his heart is not affected. Infection is really the biggest threat to his heart health, which is why I've been filled with gratitude over Ben's lack of illness for the last two years. Pneumonia is a frightening threat to his particular heart disease, which involves his pulmonary valve.
For now, other than the scheduled doctor visits for both boys, we are totally housebound for the next week or two. Don't be surprised if in addition to the jet-lagging there is also blog-post-lagging. I may need to be working a little overtime on the mom duties (though it may also go the other direction. Who knows). And I'm really glad I didn't force the kids to wake up when they fell asleep early on the couch last evening! Dr. Mom is prescribing lots of rest on the couch with Lucy Rocket today!
By Heather Rose-Chase at February 22, 2013