My Dad worked in the film industry while I was growing up, so I have memories of watching the Academy Awards each year as a young girl. Like many young people with stars in their eyes, I had a speech prepared for the inevitable day when I would win my own Oscar for Best Original Screenplay, and it generally included thanking the exceptionally mean people in my 7th grade English class for being so mean and spurring me on to success to get revenge for their cruel treatment of my tender yet talented writer's heart (yes, I've always had a rich fantasy life).

In high school and college I attended or hosted many Oscar viewing parties, where guests were encouraged to dress up in horrid thrifted prom and formal gowns to get in the spirit of the sometimes ridiculous red carpet fashion displays.

Once married, my husband (a huge movie buff who also works in entertainment) and I never missed the opportunity to see all the nominated films and make our own predictions for who would win the coveted gold statuette. It was easy to do in Los Angeles, where most theaters will screen all the nominated films once again in the weeks leading up to the Oscars, with signs saying Academy Members can get in for free.

In Macau and Hong Kong (and even to some degree, Japan), new films were released at the same time or ahead of the American release date, so it was easy to stay on top of all the latest releases and be ready for the award season.

In China, we are hopelessly behind schedule, and many of the nominated films for today's Academy Awards will never make it here. Except of course in the pirated DVD version in the backs of white vans parked on most street corners.

I'm not lamenting this change, I'm just observing and acknowledging it for what it is, a big difference from years and years of tradition for my family and I.

One week ago we were in Hollywood, driving in front of the Dolby Theatre (formerly the Kodak) and I noticed massive amounts of bleachers being set up and I briefly pondered what they were for. It wasn't until hours later when we drove the opposite direction down Hollywood Blvd and could really see the front of the theatre when we saw what all the preparation was for. And we simply shrugged and nodded. Living abroad is frequently an exercise in letting go. 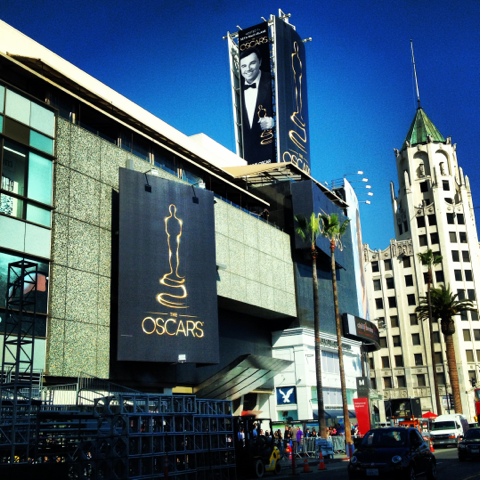