At the Shanghai airport, awaiting our flight to Los Angeles, Michael went to exchange some local currency into U.S. Dollars. It's been a year since I've seen American money and two years since I've used it on a regular basis. Even though my most favorite color is green, I have to say the money of my homeland is quite dull and boring compared to the rainbow of colors and designs featured on the currency of the five Southeast Asian and Asian countries we lived in or visited in the past two years.

Here's an American ten dollar bill with a Chinese ten RMB bill (RMB = Renminbi, which translates to "people's currency" and also commonly called yuan or kwai. Sometimes it is written CNY which stands for Chinese Yuan, but CNY is also a common acronym for Chinese New Year, so I use RMB most). It's my favorite because of the rose of course. The exchange is roughly 6 RMB to one US Dollar, so the 10 RMB bill is about $1.65. 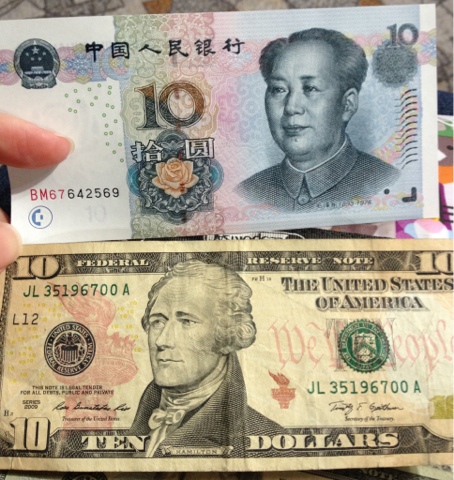