For two weeks, we absolutely stuffed ourselves with every good thing we've been deprived of while living in Asia. Seriously, there were days when my stomach and my jeans told me to stop, but my hands could not stop putting more and more in my mouth.

The evening we arrived back in Shanghai I stepped on the scale and was not at all surprised to find my weight was eight pounds higher than it was when we left (fortunately, some of that was thanks to swollen ankles and now, four days later, my weight is much closer to what it was at the beginning of February).

So what did we gorge ourselves on? Considering we spent five days at theme parks, there were a lot of burgers and fries. There was also a considerable amount of Southern California-style Mexican food, and loads and loads of beef.

Our first evening, we hit In-N-Out of course. Or more accurately, my Father-in-Law hit the drive thru so we could stay stationery on the couch instead of doing any more traveling after the long flight. 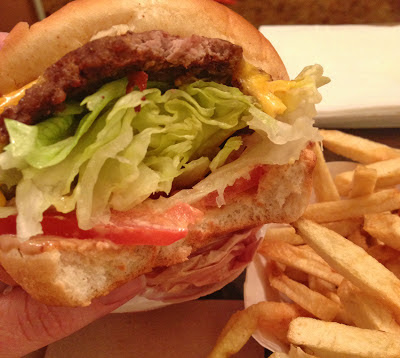 We also made sure to visit King's Hawaiian Restaurant twice for breakfast during our two weeks in America. Have you ever had those sweet King's Hawaiian rolls? The restaurant makes French toast out of the bread. And then serves Portuguese sausage that is incredibly tasty, but has a way of staying with you the whole day. A little goes a long way! 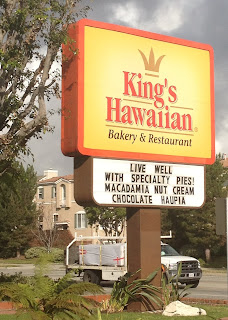 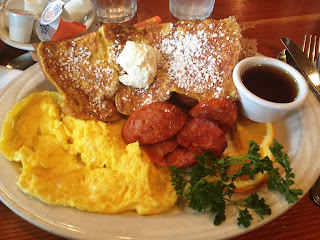 We had as much guacamole as we could consume from every Mexican place we passed, made from ripe California-grown avocados. Plus lots and lots of homemade, spicy salsa. 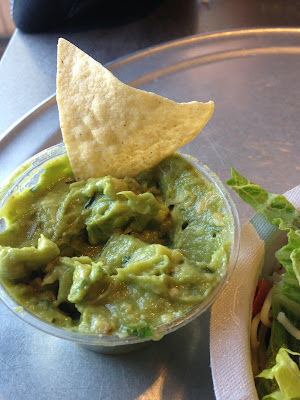 While visiting my parents in the American South, Mardi Gras was in full swing. I can't say I've ever participated in any celebration of Mardi Gras before, but I know there's one thing that will forever be a part of my late winter baking routine from now on: King Cake. Oh my goodness. My Dad and I picked this one up on a whim when he and I went out for a drive together, and every bite we did not finish after dinner, I ate the following morning for breakfast. This one was stuffed with raspberry filling. My mouth is watering just thinking about this! Even my Dad, who isn't big on sweets like my Mom, commented that he was upset he hadn't tried it the year before during Mardi Gras! 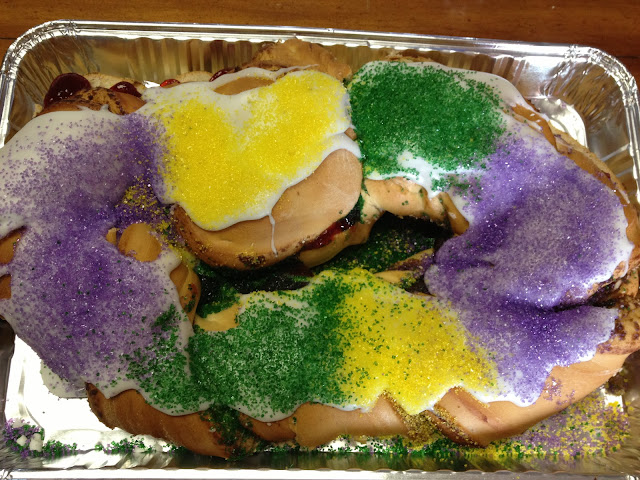 My husband is not just my personal IT guy, he's also my parents' (along with my cousin Josh who shares the duty in our absence). While at their house, Michael set up their wifi, and fixed many other things which haven't been working since they moved out of California right when we moved to Macau. He accepts payment for his services in beef. Specifically, my Dad's smoked Santa Maria-style bar-b-que tri tip. I'll tell you that in the nearly two years we've been out of America, Michael and I have had exactly three steaks, and they were all at a very high premium. When we eat beef here, it is in very small portions that I stretch like crazy in stir fry. The beef is more like a condiment than a centerpiece of the meal. So to have two giant tri tips on a platter before us was an amazing experience, only lacking an angel choir singing the Hallelujah Chorus above the table to make the moment perfect. 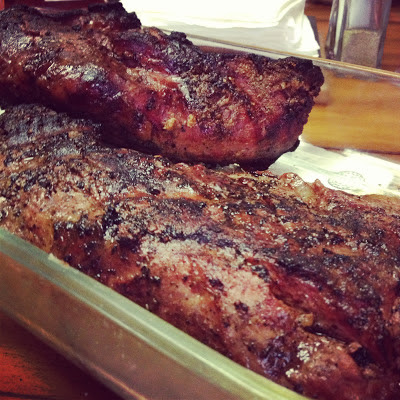 One of my life-long birthday traditions is my Dad's Birthday Tacos, which he's made for me from scratch every year since I was old enough to pick what I wanted to eat on my Christmas Eve-birthday. The last two birthdays have been lacking in Birthday Tacos! So when we were thinking what we wanted to eat while together with my parents, this was my top request. Dad did not disappoint! We called them Un-Birthday Tacos, since I adore Alice in Wonderland and we were, after all, in Florida to visit the four Disney theme parks there. 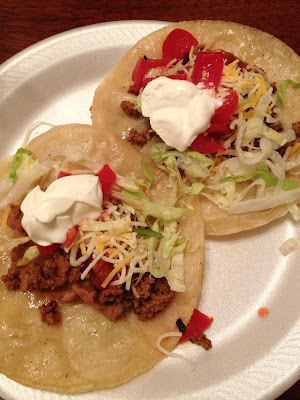 And, if you're having Un-Birthday Tacos, then there must be an Un-Birthday Cake! My sister-in-law Heidi, who happens to be an incredible cake decorator, obliged by traveling by car from Virginia to Florida and whipping up a batch of homemade cupcakes in the huge house we rented during our week in Florida. She even let me lick the buttercream frosting off the mixer paddles! A very merry un-birthday was had by all! 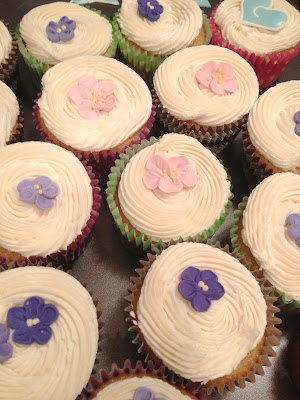 My Mom and Dad introduced us to the Waffle House. A staple of the South, they specialize in waffles and other breakfast foods that are simply drowning in butter. I have to say the waffle was exactly how I like it, crispy on the outside and a little bit doughy on the inside. Not being a fan of ladles of butter on my food (like my husband), I skipped sampling the grits. My Dad confessed that for the first time in his life, he actually had to go on a diet, as the Southern way of eating is starting to fill out his frame more than he'd like! Poor Dad, the food is just so good! Glad I was only tempted to gorge myself for two weeks instead of every day. 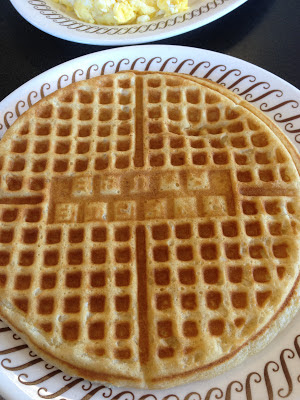 And finally, the saddest food-related moment of the whole trip. I L-O-V-E love the Monte Cristo sandwiches served at the Blue Bayou restaurant inside the Pirates of the Caribbean attraction at Disneyland. But I'm afraid I can only go for the $25 price about once every five years. Disneyland does have another option if you crave a Monte Cristo at a slightly lower price (currently $17.99. Still a painful price). The Cafe Orleans is just opposite the Blue Bayou and generally our usual place to dine at Disneyland in California. For months I'd been looking forward to that Monte Cristo. Not just looking forward to it, more like dreaming of it. Sitting on the patio people-watching, dipping small pieces of my sandwich into the blackberry preserves and unabashedly moaning with pleasure. I dragged our merry band of friends who joined us at Disneyland to Cafe Orleans, only to be met with the worst possible disappointment: 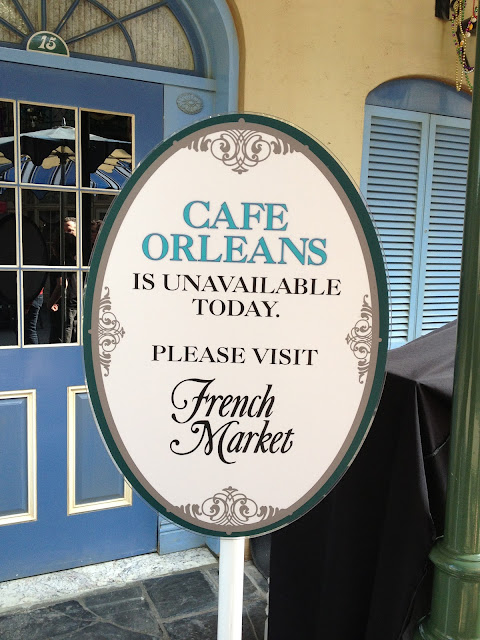 Does the French Market serve Monte Cristo sandwiches? No. No it does not. And considering we were a group of sixteen at that moment, many of whom are college students, newlyweds, or starving artists, I couldn't and wouldn't even suggest we take our group to the $25+ a plate Blue Bayou to indulge my two year long craving. Big, huge, sorrowful sigh. The recipe for Disney's most famous sandwich is online here. I may get desperate enough to make it myself before too long. However, with the price of some of those ingredients here in Shanghai, even that $25 option at the Blue Bayou starts looking like a reasonable price!

More on our American Adventure coming soon!
By Heather Rose-Chase at February 24, 2013