Right after we moved to Macau, we got to experience the local hospital when my oldest son grew very sick. I wrote about that here. I wanted to share what my Shanghai hospital experience was like as well. 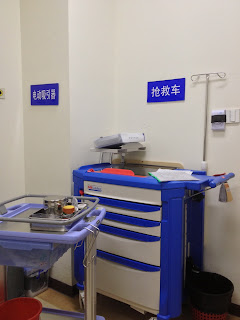 First of all, you should know that unlike America, most doctor visits in Shanghai (and greater China) take place at a hospital. Instead of going to an off site doctor's office or clinic, you just go straight to the hospital to be seen. It isn't always a requirement to have an appointment, but if you want to be assured that the doctor you see speaks English (or has someone there to translate), then an appointment is a good idea. Most hospitals have a "local" area and a "VIP" area. The difference is price and wait time, with the VIPs paying more and waiting less. Expats, unless they speak fluent Mandarin or have someone to translate for them, go to the VIP area, which generally has an English speaker to serve you. There are a few expat-centric hospitals with many foreign trained physicians, but our insurance doesn't cover them. This isn't our first experience with medical professionals overseas, so going to a more local hospital doesn't strike fear in my heart as it might for others. In fact, overall my experience this week was a comfortable experience, especially when compared with the stark foreignness of the Macau hospitals where no one spoke English and I had much miscommunication even with a translator.

My most recent illness was a simple cold which refused to go away. I rested up as much as I could before our trip to Hong Kong before Christmas, but soon after our return I was once again feeling those nasty cold symptoms. Last Thursday I started antibiotics after the cold finally settled right into my sinuses, causing great pain and a soaring fever. Instead of feeling better, Saturday morning I only had enough energy to get up, shower, and then climb right back into bed. By Saturday evening, the pain in my head grew so intense I started throwing up. Twenty-four hours later, I was still unable to keep even a sip of ginger ale down and I was dizzy with unrelenting pain and dehydration. I couldn't even mildly protest when Michael made a late night call to the local hospital and our insurance company to find out the procedures for bringing me in to be seen after normal business hours. Michael had been busy all weekend, or I'm certain he would have forced me to go in sooner.

As we don't have a car and driver, we had to take a taxi for the short ride. Just getting upright to go downstairs was agony for me. Thankfully our lobby guard radioed the guard at the street who sent a taxi right to our door. When we arrived at the hospital we followed the signs to the main lobby, which was wide open, but deserted and dark. The information desk was vacated and in shadows. Michael had been told to report to the 11th floor by our insurance company, so we wandered around a bit in the dim light searching for an elevator. The 11th floor had one masked nurse behind a desk who told us to sit in front of an elevator which was blocked by a Christmas tree. No, really. See: 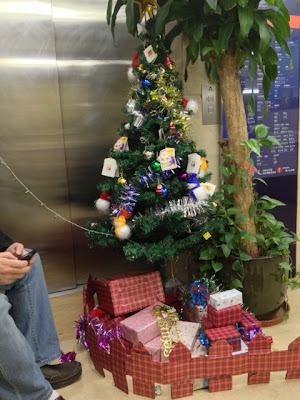 Another nurse and a very grumpy man in a blue polyester suit showed up. The nurse translated for the grumpy man, who said we needed to pay 50.50 RMB (~$8.50 USD), cash only, to be seen. So Michael handed over the cash, while I clutched a plastic bag from Hong Kong Disneyland and tried not to throw up. I was then ushered into a triage room to be questioned by a nurse, who determined that yes, I was sick enough to see a doctor. We were ushered back to the Christmas tree/elevator waiting area with forms to fill in, where my eyes bugged out upon seeing the tree had been knocked over, separated into three pieces, presents and ornaments scattered all over the floor. We'd been gone just a few moments and the floor was deserted. We initially thought someone got off the elevator and got tangled in the tree, but we then noticed a sign saying that elevator didn't stop at the 11th floor. I asked Michael to reassemble the poor tree because the sight disturbed me greatly.
Next, the grumpy man in the blue suit returned with the nurse, to inform us the doctor would want to run blood tests which would cost 65 RMB  (~$11 USD) in advance, and that Michael should follow them down to the first floor (in a different area than where we arrived) to pay the cashier. Michael got to experience the madness of the "local" area, which was packed with patients and long lines. The nurse cut in front of everyone and put Michael's payment through while I stayed up on the 11th floor guarding the tree and miserably clutching my plastic bag.
They returned and I was brought back to the examination room to be questioned, poked, prodded, and assessed by the doctor, who spoke excellent English. I noticed the string of bags meant to bring luck and fortune and health attached to the IV pole on the bed, and fervently hoped I'd be getting something a little more substantial to help me feel better. 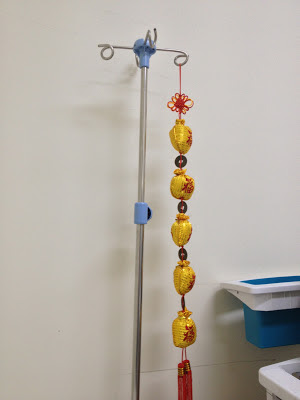 They took my blood and sent me back to the Christmas tree to wait for results. After 30 minutes, the grumpy man in the blue suit and his nurse counterpart returned to say I needed to be hydrated and treated with medication via an IV, and that we needed to pay for the medication and fluids in advance once again. Michael made a second trip down to the cashier and then to the hospital pharmacy where the grumpy man collected the medications after they were paid for.
Michael returned and we were escorted to a hospital room on the 12th floor, also part of the VIP ward. This floor, like the 11th, was dark and deserted, with only one occupied room. When Michael was paying for the medicine, the nurse asked if I would like a bed or if a couch would be fine. He said a bed. She told him that would be an extra $100 USD. He said a couch would work great (I agreed with his decision, $100 is a flight to Hong Kong and the couch was long enough for me to lay down on). We were ushered into a room and another nurse tried to put in an IV. It was incredibly painful and fluid immediately made a huge bulge on the back of my hand. I started screaming in pain, so she pulled it back out. She didn't apologize, she just said the antibiotic was painful and tried my other hand. Better. I tried to focus on the fact that the IV would make me feel better and ignored the throbbing. 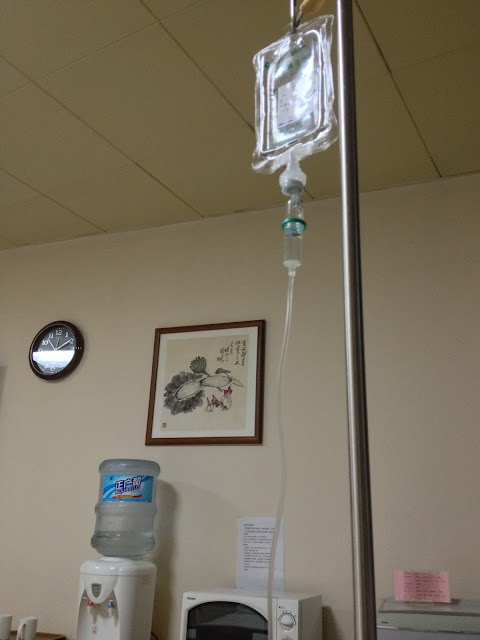 Here's the hospital room with two empty beds which could be yours for $100 a night! I laid on a couch identical to the burgundy one across from me while Michael sat in the chair telling me stories to distract me from throwing up or freaking out over the blossoming bruises on the back of my hands from the giant IV needle. 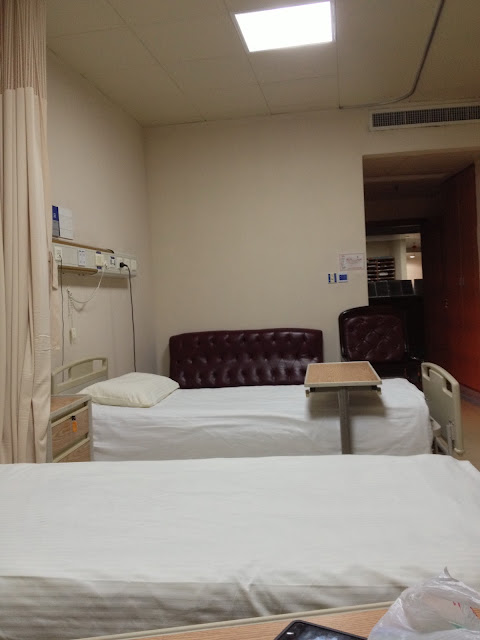 Speaking of vomiting, every now and then we'd hear the loud sound of the floor's only other occupant throwing up. Completely nauseated myself, I kept repeating the line from Finding Nemo - Find a happy place, find a happy place.
I repeatedly asked the nurse what was in the IV bags they were giving me. All the notations were in Chinese except one, which said Vitamin B6. The nurse would only say one was an antibiotic and one was anti nausea. Considering there were eleven separate notations, I think I got a little bit more than that. I finally got to the last drop in the last bag, and the nurse gave me a bag of medications to take with me, sending us home in the early morning of New Year's Eve to the coldest temperatures we've faced yet.
As we left, I got to walk through the madness of the first floor local area. It was noisy, thick with cigarette smoke, and filled with the strong aromas of various foods being slurped up, but also devoid of Christmas trees, intact or otherwise. The chaos reminded me of my experiences at the hospitals in Macau, and as I shuffled my way out, I found the option of the VIP area gave me another reason to be grateful that we are here in Shanghai.
After a few rough hours of sleep back home, I googled all the medications the nurse gave me. One was an antibiotic which Drugs.com said is useful in treating the plague (!), one was for my upset stomach, one was a pain pill containing Tylenol, caffeine, and propyphenazone (which is banned in a couple places but took my headache away quite effectively), and a box of yinhuang hanpian, a traditional Chinese medicine which she said would make my throat stop hurting. And oh my goodness, did it ever! I'm a fan. 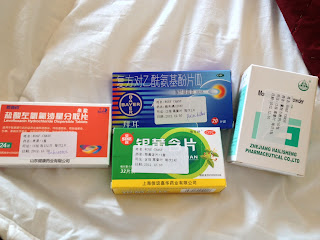 Three days later I can see an improvement though I'm still quite weak and prone to needing an immediate nap every few hours. The backs of both hands have pretty large bruises thanks to the attempted and successful IV lines.
My overall impression: In Shanghai, the doctor asked me about my symptoms, asked me lots of questions which felt unrelated to the reason I was there, examined my whole body (not just my head and stomach, but my knees, elbows, ankles, back, neck, etc.), and ran a lot of tests. The testing part is similar to what might happen in the US, the difference being I was never given the test results. I did ask. I wasn't told what medication was in the IV, though I asked a few times. The only explanation I got beyond antibiotic and anti nausea was that they were "good for you." The only decision left up to me was whether I wanted to pay for a bed or just use the couch while hooked up to the fluids.
Part of this is the culture, where facing something in a direct manner, head on, is frowned upon. Bad news isn't easily given, even in business situations (much to my direct and straightforward husband's chagrin). I don't feel like I got bad care, but I know if I had felt even slightly better, there would have been more of a fight on my end to know what the test results were and what was in the IV. Honestly though, as a mom accustomed to taking care of everyone else, it was a little bit nice to finally give up and allow myself to be taken care of without having to know all the details. After all, the pain did subside, as did the nausea, just like the nurse said it would. Just another little something to get used to here in China. It's all going to be okay so long as I have access to that amazing yinhuang hanpian!
By Heather Rose-Chase at January 03, 2013