I feel like I was sick a lot in 2012. It seems to take my immune system a whole year to adjust to a new location. Unfortunately, we seem to move every year! Great for my wandering soul, not so great for my health.

Three of the four members of my family have mold allergies, which tend to cause sinus issues for two of us and asthma for my husband. Hong Kong and Macau have subtropical climates and are quite humid most of the year. There is visible mold growing everywhere you look outdoors, and without a dehumidifier in your home, mold will grow on your walls and in your closets, eventually making its way into your clothing and soft goods. Strangely enough, none of us with mold allergies had a problem at all in either Macau or Hong Kong. Bringing up the mysterious lack of symptoms to our doctors, we were told that the humid climate, while breeding mold like crazy, actually works in the favor of those with mold allergies as the mold tends not to go airborne. In Southern California the climate is far more arid, and mold carries on the winds which come in from the desert in the Santa Ana winds, and stirred up on the ocean breezes which blow in from the Pacific Ocean. You may have the cleanest mold-free home humanly possible to sustain, but just going outside or opening your window will expose you to those nasty spores which cause us so many problems. Macau was a nice break from those mold issues.

Flash forward to the present here in Shanghai, and we find we aren't so lucky. At least I'm not. Mold is here, but it's not as bad what we experienced further south. Overall it is far less humid (though our fellow expats like to complain about the humidity here, I've not yet had to shower 2-3 times in one day to remove the stickiness of the air mixed with sweat, a common summer occurrence in Macau), but the air quality here is terrible. There is a free app which tells us every hour what the air quality is, and I actually use it to guide my daily activities. This feels very sci fi to me! The first set of stats are the official numbers from the Chinese government. The second set are from the US Consulate here in Shanghai who also monitors the air. Please note the Chinese government always paints a rosier picture of the pollution. The US Consulate also tweets the numbers every hour. Here's a selection of days from the last few months: 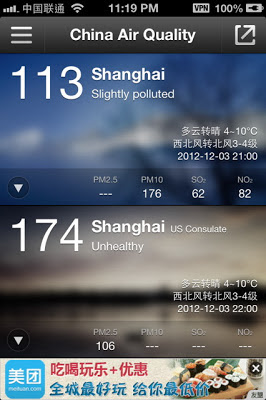 And here's a graph of the last 30 days based on the US Consulate's numbers. No wonder I've been sick most of the last month! 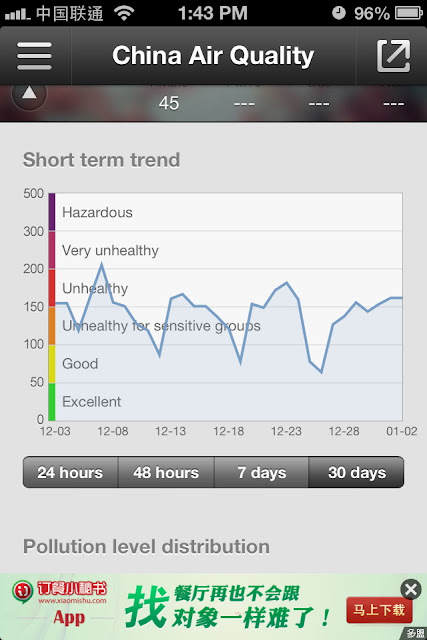 Even without the app, I can tell when the quality is particularly bad by just breathing. Michael is the one with asthma, and though he hasn't seen an increase in breathing problems, there have been several days where my own breathing is labored and a puff on an albuterol inhaler makes a world of difference.

In the seven months we've been here, I've had three sinus infections, each one worse than the last. This is an old issue which hasn't surfaced in years thanks to a great ENT (ear, nose, throat) doctor in Los Angeles who set me on a course of treatment that all but obliterated them five years ago. I guess it's time to seek out a new ENT specialist here. Tomorrow I'll take you on a "tour" of the hospital I went to here in Shanghai when my latest sinus infection got quickly out of control. I'm grateful the services were competent and inexpensive, though completely different from what one would experience in America, or even Macau for that matter! For now it's back to bed for me.
By Heather Rose-Chase at January 02, 2013