When we were looking at flats in Shanghai, we noticed many of them had these metal ladder things on the bathroom walls. My initial thought was it was some sort of towel rack, followed by a second thought - that thing could hold a lot of towels.

When we finally settled on this place and came for our walk through, the owner's husband (who speaks splendid English thankfully), showed us what they really are - bathroom heaters. During the winter, you open the valve on the lower left and press a button on the water heater out on the balcony. This streams boiling hot water into the pipes, which then heats the entire room quite nicely.

Someone told me they were indeed heated towel racks, but they get far too hot to actually put anything on there. Like our bathroom in Macau, the floor and walls are made of marble with no vent for the heater or air conditioner. This means in winter the bathroom is frightfully cold (especially since one wall of the bathroom is windows -single paned- and quite exposed) and in summer it becomes unbearably hot. I'm quite low maintenance, but if blow drying my hair in the summer is absolutely necessary, I do it in another room right under the a/c vent. 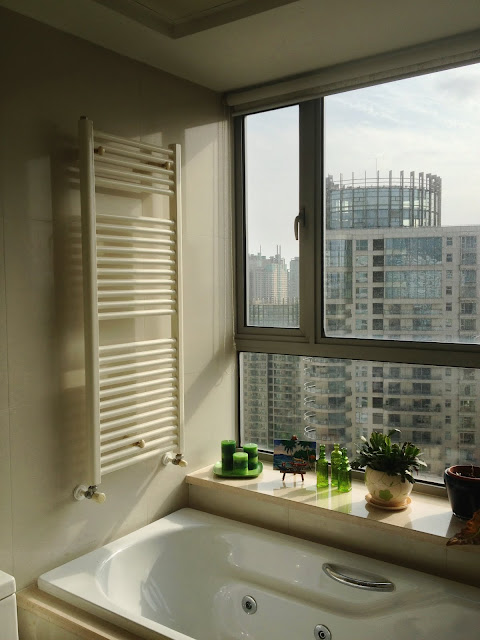 I'm such a fan of this type of bathroom heating! The only issue we've had (and it's a considerable one) is that our water heater machine is out on the exposed balcony in the cold, and frequently during the night the automatic pilot cycles off leaving us without hot water, and therefore, without that lovely bathroom heat in the chilly mornings. It's solved by pressing a button on the water heating machine, but still a pain to go from our warm bedroom out to the balcony at the other end of the house. I have to say, when it works, it's amazing! The boys' bathroom and the guest bathroom are more in the center of the house with no windows, so they never get quite as cold (or hot) as ours and we've not yet tried turning on the heat in those bathrooms. Maybe for our next set of guests?

One final image, a partial view from our bathroom. We have a privacy shade that rolls down, but most of the floors of the adjacent buildings are completely vacant. Shanghai is crazy with constant construction, but there seems to be a lack of people to fill all that new construction. Guess they're just being prepared should a few million more people decide to join the 24 million other people who already live here! 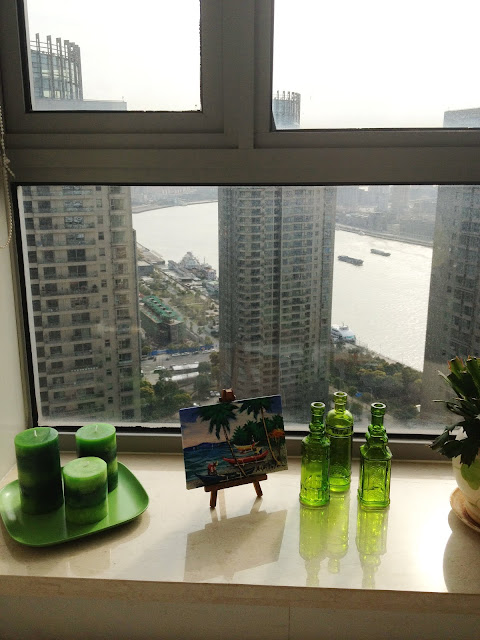