Shortly after we moved to Shanghai, we found ourselves in a taxi headed home and saw an unusual sight. Or I should say the boys and I saw an unusual sight, Michael had his nose buried in his iPhone. Running across the road in front of us, trying to dodge the cars, were ten middle-aged men dressed in bright blue overalls and neon orange shirts. And like a band of miners, they were all carrying pickaxes on their shoulders! They looked like they escaped out of a Mario Bros. video game and would look right at home in Minecraft. The boys and I yelled out in surprise but by the time we could tear Michael's attention away from Angry Birds, we'd already sped past. He doubted our story then, and even months later. I admit, it does sound kind of crazy. What would anyone in the giant metropolis of Shanghai need with pickaxes? And why were they dressed like cartoon characters?

I'm happy to report that after six months of pondering this, I came across one of the pickax wielding men along with one of his cohorts, and before I lost my nerve, I snapped a quick photo. 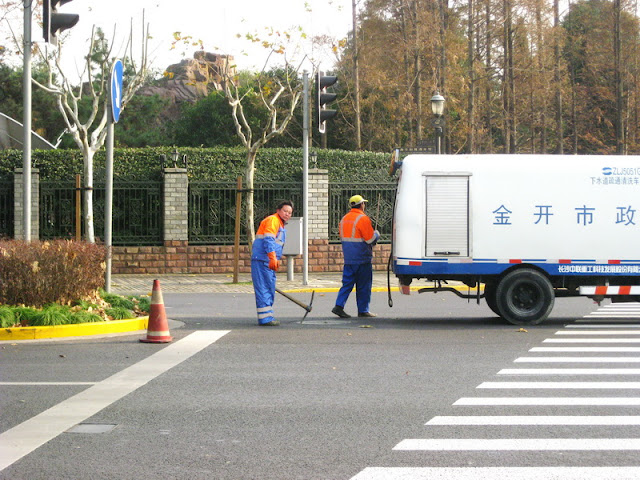 Turns out that wasn't such a great idea. Of course, as soon as I took it, he yelled at me and got his coworker there to yell at me. And I still had to cross the street  right in front of him, listening to him yell me across. Since I couldn't understand what he was saying and I'm not a fan of being yelled at, I called upon my wild imagination and clearly heard him saying, "If I were in my magical video game and/or enchanted Disney world instead of this sad and sorry real one, I would never let a princess as fair as you cross the road on her own two feet! I would summon a carriage to bear you down the road so you would not have to tire your legs! How ashamed I am to be in this real world! My apologies Your Highness! I long for the day we shall meet again in fairer pastures in the realm where we both belong." 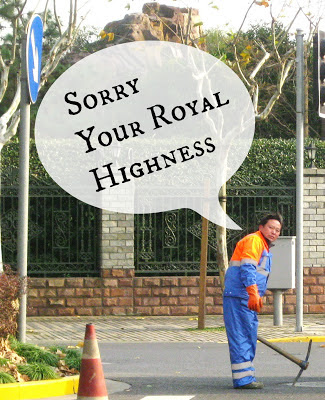 In rereading that, I'm going to go out on a limb here and guess it is this (typical for me) line of thinking that made my husband doubt my original story of ten men with pickaxes in the first place...
By Heather Rose-Chase at January 06, 2013