My husband is currently hurtling through the air (safely ensconced in a comfy business class seat) on his way to a week of emergency business meetings in Los Angeles. The sad part for him is he'll get back home here in Shanghai just in time to unpack, spend a couple days in the office, repack, and then turn back around with the boys and I for our long awaited first trip back to America in nearly two years. Poor Michael!

It was a stressful weekend, as all the preparations we were making for the family vacation had to be compressed in a shorter amount of time than I expected, mainly the parts where Michael's help was required. We had dinner with him and then sent him off on the train to the airport.

I got the kids to bed, but instead of sleeping myself, I've been up placing huge orders on Old Navy, Amazon, and Drug Store.com's websites so that Michael can bring back much of what we were intending to buy in America in his two empty suitcases which have a 70lb limit, instead of the single suitcase with the 50lb limit we'll each have when we get to fly economy in February. The brilliancy of this plan is we can try on clothes in the comfort of our own home, and then bring anything that doesn't work right back to America the following week! This will save my sanity somewhat- American malls and department stores are huge and overwhelming when you've not been in them for awhile. Heck, they're huge and overwhelming even if you go every week! Or is that just for me? I'm just excited to get some new jeans, as my second favorite pair just yesterday went the way of my first favorite pair two months ago, wearing down enough that they fell apart. Sadness!

I keep checking Michael's flight status to see where he is, and the last time I checked, it looked like his flight was playing jump rope across the Pacific Ocean. Here's hoping it's a peaceful flight and I can get at least a little bit of sleep tonight... 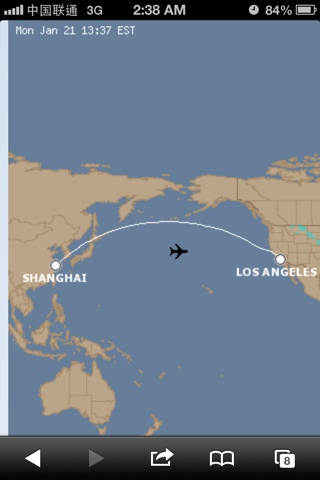