Okay, not really. It's actually the Year of the Snake. But for us Chases, there is a spectacularly magical Mouse-related year about to commence!

For Christmas this year, we gave the boys these photos: 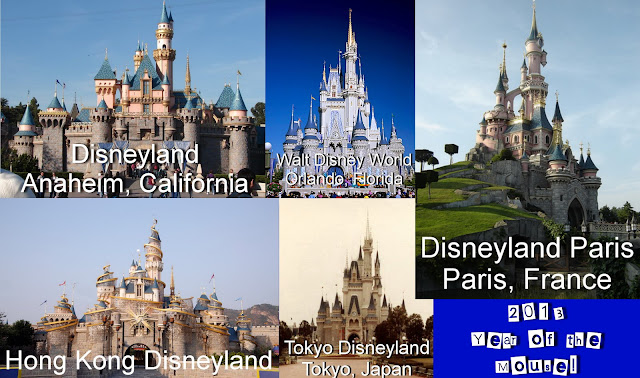 And then we told them we'll be going to all of the Disney Theme Parks worldwide in 2013!
I'm not sure who was more excited, the boys or their Mama! Truth be told, Michael, Nathan, and I have already been to all the Disney Parks except for the two in Paris. But Benjamin wasn't yet born when we lived in Japan. For that matter, Nathan was just a 13 week old baby when we went to Tokyo Disneyland and a ten month old when Tokyo DisneySea opened. So we got the brilliant idea to do them all again now that both boys are old enough to remember this year the rest of their lives.
As you may know, the whole reason we are living in Shanghai is because of Disney. My husband is a project manager for Walt Disney Imagineering, responsible for the entertainment venues (and a host of other things) which will go into Shanghai Disneyland, opening sometime at the end of 2015 or beginning of 2016 (no official date has been released, that is the estimate given to the press, not any special insider information).

All Disney employees are called Cast Members, because Walt Disney wanted the entire Disney experience to be like a show, and the employees create that show. In November, the Shanghai team had a Cast Member Appreciation Day in a small ballroom here in Shanghai. At the time, there were just over 100 full time employees on the Shanghai project. If they do the same thing next year, they'll need a much larger space to accommodate the growing team! Here we are, getting the VIP treatment with our old pals Mickey and Minnie in front of an artist's rendering of what the Shanghai Disneyland Castle will look like. 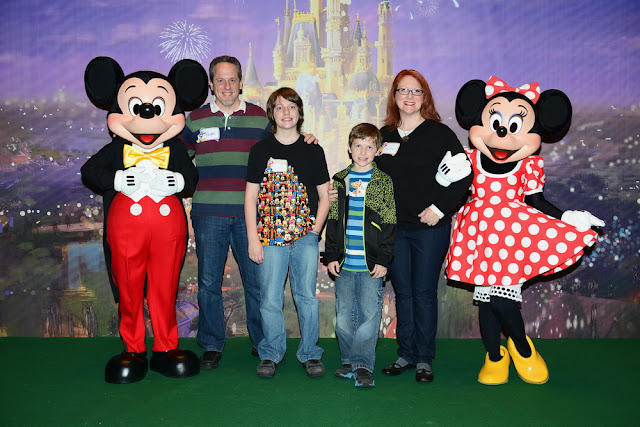 One of the great benefits of working for the Walt ﻿Disney Company is a beautiful silver pass which allows you enter almost all of the Disney theme parks in the world along with three guests on most days. 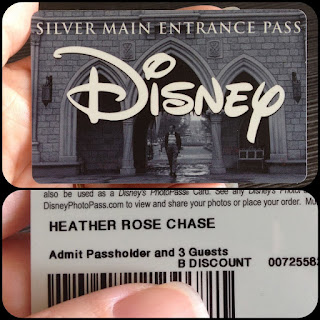 Disney also gives one to the spouses/domestic partners of their employees as well, though Michael's card and my card cannot be used on the same day (that's cheating!). The Silver pass does have a handful of blackout dates and isn't valid for use at either of the Tokyo, Japan theme parks. Wanna know why? Neither Tokyo Disneyland nor Tokyo DisneySea are actually owned by the Walt Disney Company. They are owned by Oriental Land Company, which pays for the license of the Disney brand. So we'll actually have to pay when we visit those two parks!
Having a Silver pass and living a two hour flight away from the nearest Disney theme park is like having a driver's license with no car. It's quite sad. However, this is very typical for us. My husband worked on Tokyo DisneySea and Hong Kong Disneyland, and both parks opened just as we were sent back to America at the end of the project, and both times he left Disney to work for other projects so we never really got to take advantage of the passes. This time around, we vowed to not let this precious resource go to waste.
﻿
﻿
There are currently eleven Disney theme parks around the world, along with a couple water parks down in Florida. In America, there are two Parks in California. It's home to the original Disneyland Park which Walt Disney himself built, opening back on July 17, 1955. That's actually Walt's image up there on the Silver pass, walking through Sleeping Beauty's Castle. In early 2001, a second theme park was built in the existing Disneyland parking lot. Disney California Adventure is a uniquely California experience, with different lands representing great things about the State. Being native Southern Californians, both Michael and I were raised going to Disneyland regularly, and our children have been to both Disneyland and Disney California Adventure more times than I can count. Nathan's first trip to Disneyland was ten days after he was born!


Also in America are four Parks in Florida which make up the Walt Disney World Resort. There's the Magic Kingdom, which is quite similar to Disneyland Park in California except the Castle belongs to Cinderella, not Sleeping Beauty. It opened in 1971, five years after Walt passed away in 1966.  The second park to open in Florida was EPCOT Center (now just Epcot) in 1982. Epcot stands for Experimental Prototype Community of Tomorrow. I'm glad they shortened it! Instead of a castle, it has a large geodesic sphere which houses an attraction called Spaceship Earth. ﻿﻿﻿
The other two parks that make up the balance in Orlando, Florida are Disney's Hollywood Studios (originally Disney MGM Studios) which opened in 1989, and Disney's Animal Kingdom, which opened in 1998. Part of our honeymoon back in 1996 included a trip to Walt Disney World. We went back again in 2004 with our two very little boys. I don't think they remember it one bit! ﻿﻿﻿

The first international Disney theme park to open was Tokyo Disneyland in 1983. It is very similar to Disneyland Park in California and the Magic Kingdom in Florida. It's also home to Cinderella's Castle like Florida (that lucky princess, castles on two continents!). In 2001 we moved to Tokyo because my husband was on the Tokyo DisneySea project, which opened on September 4, 2001. We were scheduled to repatriate back to America on September 11, and when a spot opened up to leave a week earlier, we took it. How grateful I am that we didn't end up stranded in Canada and Hawaii when flights around the world were grounded, like other members of the Tokyo DisneySea team who did fly back on the 11th! Tokyo DisneySea, like the name implies, features lands that have something to do with the seas around the world. Michael built an outdoor stage and mounted a show in the American Waterfront area.
The second international Disney theme park to open was Euro Disneyland in a suburb of Paris, France in 1992. The castle, like California, is also Sleeping Beauty's Castle, but it is far more ornate! The name was changed from Euro Disneyland as part of a rebranding effort, and now called Disneyland Paris. The park itself wasn't an immediate hit by any means. I can only imagine that if I grew up in France or the UK where there are real, honest to goodness castles with real live princesses, I wouldn't be all that interested in seeing a fake American one. It actually took three years for the park to turn a profit! But by 2008, the park became the most popular attraction in all of Europe, including both the Eiffel tower and the Louvre combined. A second theme park, Walt Disney Studios opened in 2002, and is very similar to Florida's Disney's Hollywood Studios.

The most recent international Disney theme park to open was Hong Kong Disneyland in 2005. My husband also worked on that project, opening the Storybook Land Theatre and mounting a show, The Golden Mickeys, which still runs today. It is a very close copy of the California Disneyland, with an identical Sleeping Beauty Castle. In fact, in some of our photos, the only way you can tell the difference is that Hong Kong has the sweeping hills of Lantau Island rising up behind the castle.
By Heather Rose-Chase at January 20, 2013