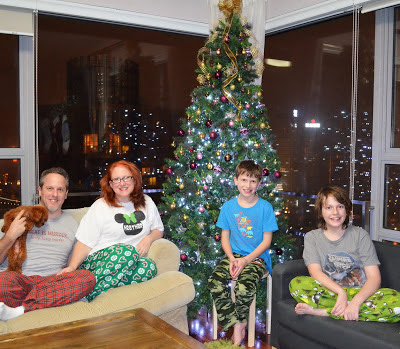 Every December for as long as I can remember our friend Miss Amy has thrown a family Christmas Pajama Party on a Sunday afternoon. Everyone comes in their jammies and brings breakfast foods and the kids get to open a gift in a massive crazy moment of joyful noises. (Here's 2008, here's 2009). We missed it last year, and we'll miss it again today. Another challenge of living abroad - missing out on traditions. Tonight we put on our Christmas pajamas and took a photo to send to Miss Amy and our Southern California friends, and then we snuggled up on the couch to watch Singin' in the Rain.

Our nine year old son didn't get the movie at all, and asked us to explain the whole thing to him when it was over. And neither kid understood what was so wrong with Lina Lamont's voice. I think today's cartoons and animated films have inured them to crazy voices that don't necessarily match the character's image. But then again, they also hear many different accents and voices and languages every day, so maybe that has opened their ears to the fact that not everyone sounds the same. Yeah, I'll go with that one.

It will be the middle of our night when our Southern California friends will be eating pancakes and ripping open presents. We'll just have to enjoy the party in our dreams!
By Heather Rose-Chase at December 17, 2012