Besides small (or non-existent) ovens and teeny-tiny refrigerators, another thing that many flats in Asia are lacking is closet space. Michael moved to Macau ahead of us and picked out our flat there before the boys and I arrived. One thing it had in abundance was storage space. Every single room had wall to wall (sometimes two walls) of floor to ceiling built in closets and cupboards and drawers. There was so much storage that about half the available space was completely empty! None of our previous homes have ever had storage like that, not even in America where we had a garage!

Flash forward to our current flat, which has almost no built in storage. Each room has a wardrobe, and small ones at that. We had to run out to our handy second-largest-in-the-world IKEA to buy extra dressers, shelves, sideboards, cupboards, cubbies, and anything else we could use to find homes for all our stuff. And after six months, we're still not completely unpacked. A record for us for sure!

One thing we immediately had to do was to gather all our winter clothing and stuff it into oversized vinyl bags which fit under our bed. And now that the temperatures have dropped, I've been pulling out all those fuzzy sweaters and flannel pajamas. Which meant it was time to pull out all the shorts and tees and put them into the vinyl bags to be shoved under the beds.

In many books and stories and blogs I've read about doing this exact thing, packing away the summer things to make space for winter. Coming from Southern California, this was never necessary. At least not for us, as we don't ski or snowboard or otherwise regularly spend time in particularly cold places. 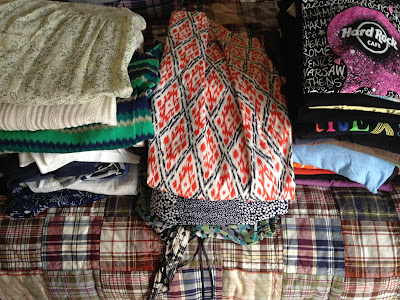 I am getting that feeling of starting to hate everything in my closet (or under the bed, as it is). Part of it is that I've added almost zero new pieces to my wardrobe in nearly two years. My curves do not mix well with the tiny clothes that fit the more narrow frame of my Asian sisters. And the clothing in the stores specifically stocking goods with Western bodies in mind charge a premium I'm not willing to pay. In Macau we did order a few times from Old Navy, going in with a few other families to spread out the exorbitant shipping cost. But here in China you have to pay duty on anything that comes in, which means I might as well just shop at the local store's prices and be grateful. And take heart in the fact that though I'm sick of my current clothing choices, no one here in Shanghai has seen any of it.

Word on the street is that after ages and ages of waiting, there will be a sewing machine under the tree (or perhaps next to my birthday cake) for me next month. Considering one of the things currently taking up space in this house is the boxes and boxes of fabric and patterns that I shipped from the U.S. to Macau and then up here to Shanghai, I foresee a whole new me-made wardrobe coming very soon! Which is a very good thing as this morning my favorite pair of well worn 10+ year old jeans finally gave up the ghost and ripped in a non-repairable place. Sigh. The one item of clothing I don't think I could have ever become sick of, like an old and beloved best friend. Guess it's time to go find a new best friend. Sadness.
By Heather Rose-Chase at November 28, 2012