So yes, I'm an American, and Thanksgiving is my uniquely American holiday which celebrates thankfulness through the act of stuffing ourselves with way too much food while watching parades and football. Strangely enough, it has never been my favorite holiday. I feel so unpatriotic stating that, but it's the truth.

I'm not opposed to a day that celebrates gratitude and thankfulness. In fact, I recently ran one of those little programs on Facebook which tell you the words you use most in your status updates, and my top two were grateful and love. And I know myself very well and I have a way of letting my mind wander down negative roads, thinking about grass being greener on the other side, so I practice stopping the negativity by thinking (and evidently posting on Facebook) about all I have to be grateful for (try it, it makes a world of difference). So no, I'll never be against thankfulness. But there has never really been space in any of the family gatherings I've been to over the years to go around and say what we're thankful for. Not that I haven't tried to start it up many times over the years. We did successfully use the going-around-the-table thing as a way to tell the family we were expecting Benjamin, with comedic results (read about that here), but that was it.

As a kid we would trade off sides of the family to celebrate with. One year we'd do Thanksgiving with the Rose family and Christmas with the Rayners, and then the following year we'd switch. We ourselves never actually hosted that I can remember, both sides of the family complaining that our distance was just too great. I actually used to dread Thanksgiving... we'd have to get dressed up and be on our absolute best behavior and travel for hours in the car to see aunts and uncles and cousins who we only saw once a year. My first cousins are all either ten years older than me or ten years younger. So my brother and I (twelve months and one week apart) were lost in the middle. And unlike Christmas where everyone gets something to play with and then the adults delight in the childlike behavior that ensues, Thanksgiving was about sitting still and quiet and listening to the same stories told every year while football blasts away loudly on the television. Not being into sports at all, I'd bring a stack of books and sit in a corner and try not to make a nuisance of myself.

Once I went away to college, my parents started hosting Thanksgiving for just our immediate family so I could come home to them. After I got married, I hosted Thanksgiving exactly one time. I'd spent the previous several years as a vegetarian, and getting up at six a.m. to stick my hand in the carcass of a dead bird had me stifling shrieks. I vowed that would be my last bird (and it was, up until about a year ago). I also vowed that I would happily accept any invites that came our way for Thanksgiving, and I would be the great guest who brings a load of sides and helps with the dishes. This has led to many wonderful times sharing a meal with all sorts of people. Last year we spent an amazing Thanksgiving in the Philippines with American friends we knew from back in Hong Kong. Another year we spent it backstage at the El Capitan Theatre in Hollywood, where Michael was working and I brought in a stack of pies to celebrate potluck style with the cast and crew who were all far from family themselves. And there have been plenty of times celebrating with Michael's parents or my parents or my extended Rose family. Working in the entertainment industry means you work so others can play, so we had many years of someone bringing over a plate for us to heat later.

There aren't all that many traditions I hold onto fiercely. I think our nomadic lifestyle prohibits us from doing everything like we've "always done it." Instead, we make up new traditions and hold loosely to others. We make a big deal out of birthdays and always get ice cream when it rains. I kind of hope both of my boys marry into families with loads of traditions going back several generations so they can see what that lifestyle is like. Or maybe not. Because I also hope they can be like we are, forging new traditions and discarding others but holding onto what is important, gratitude for the things we have, and love for the people we get to share life with.

But don't fear, Thanksgiving evangelists! Even though we're in China we're not completely left out of a somewhat slightly traditional holiday-like experience, though not on the same day as everyone back in America. Yesterday (the actual American Thanksgiving), Michael worked very late to prepare for a business trip today. I took Nathan to IKEA for a few things, and then got stuck waiting for nearly an hour in the pouring rain for a taxi home. I beat Michael home by only 30 minutes and called in an order at a local Cantonese restaurant for some Hong Kong/Macau style comfort food. Right as Michael walked through the door, the restaurant called to say they'd run out everything we ordered! Which would have been okay except for the fact that our own cupboards were nearly bare. So, we improvised and baked up a potato in the rarely used microwave, fried all the remaining bacon in our house, and made a huge omelet for dinner. We were all very thankful we didn't have to go out into the pouring rain to find dinner!

Michael returns from his business trip late Saturday night, so on Sunday we'll be cooking up a turkey and pulling out the Christmas tree, decking the halls, and making lots of merry. We'll call that our Thanksgiving just so we don't feel we're completely depriving the children. I could have done without a turkey at all (see paragraph about shrieking over touching dead bird), but the online grocery where I do a lot of shopping had a deal I couldn't pass up. It was only 74 RMB ($12 USD)! I thought that was a great price and I figured we'd get a lot of mileage out of $12 worth of turkey. However, when the turkey was delivered, I was in for a shock... the 74 RMB was actually per kilogram. And friends, I think they saved the biggest bird they had for me because I had to shell out almost $100 USD for that frozen, imported turkey. I'm so thankful I had the cash on hand to pay for it! 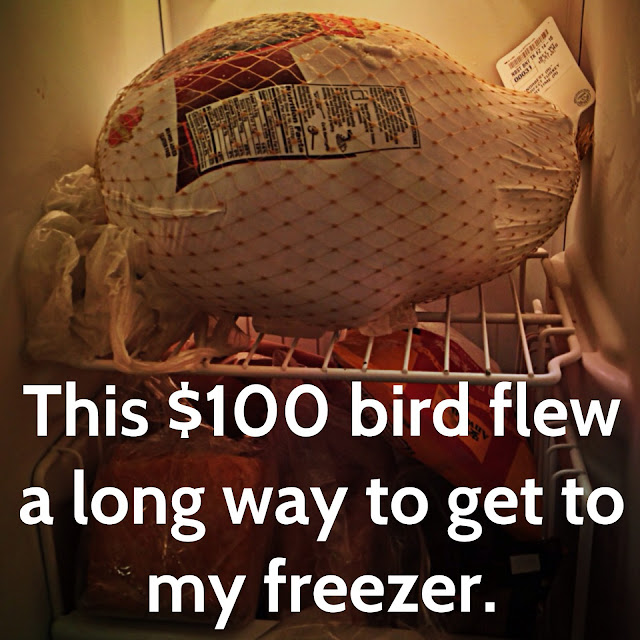 I just hope I don't mess it up. That price tag puts a lot of pressure on me to get it right, and it's not like I have all that much experience. Thankful to know I have a husband and at least one child who will eat anything that is put before them! Got any tips? Leave them in the comments! One other thing I'm thankful for is my huge-by-Asian-standards refrigerator and the fact that I have an oven at all! Both are somewhat rare here in a culture that doesn't bake, shops daily for fresh veg, and cooks most meals over a stove top.

Happy Thanksgiving to my family and friends around the world! I'm so thankful for all of you who come here and read this little blog, even the posts like this one which go on and on and on... Have a great rest of the week!
By Heather Rose-Chase at November 23, 2012