The apartment complexes in Shanghai are like little suburbs in the sky. Instead of a sprawling neighborhood, they just go straight up in the air. For instance, our complex takes up an entire block with eight buildings, and each building has between 30 and 42 floors, with two to three flats per floor. That's a lot of people living in a single city block!

Our complex has two entrances, both are heavily guarded. Each building also has a guard around the clock who sits at a desk in the lobby. When we moved in, all the guards were pretty grim faced. That's their job, I suppose. I mean, they aren't there to serve as ambassadors for unauthorized people to go strolling around the grounds. I, however, am an ambassador. An ambassador of the expat community. So I've made it my job to make sure to pause, look every single guard in the eye, smile a dazzling smile and give each of them a cheery ni hao (hello) each time I pass one of them.

At first, the guards would just grunt at me. But after a month of persistence (or typical Heather-style stubbornness), I broke their gruff demeanor and now I get a huge smile, a cheery ni hao back, and many times, a salute! I cannot tell you how much this lifts my day, especially when the person walking in or out of the gate behind me gets the standard grim-faced grunt.

I knew I'd made a big impression on the guards when last week a friend of ours from Macau (we've had a lot of guests from Macau in the last two weeks! Hooray!) was in town and wanted to stop by to take me to lunch. She had my address but not my building or apartment number. When she approached the guards at the entrance of the complex, she explained her predicament (in Chinese) and told them her friend had red hair. She says they lit up like Christmas trees and pointed her to my building. She told the lobby guard the same thing, and he actually escorted her to the lift and punched in the code for my floor. I think it helps that my hair is really, really red right now. See here: 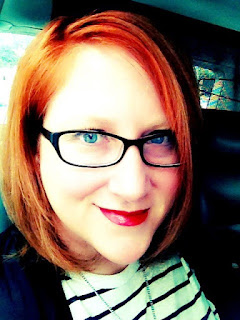 So I stand out just a wee bit more than the average expat in Shanghai, and certainly more than anyone else in my complex. Although I hope it isn't just the red hair but the friendliness I try to convey that makes me memorable! I know they care, because today I went out to the corner to meet a friend for coffee. I was all nice and bundled up against the 53F/12c chill except for my feet, which were in my usual flip-flops (You can take the girl out of Southern California, but you can't take the Southern California out of the girl). Did I get scolded by every single one of my guards? Yes. Yes, I did. Nice to know they guard our safety right along with my health and well being!