We're halfway through our second loop around the calendar of birthdays spent abroad. I love birthdays and will do anything I can to make them special. Ben had his first Shanghai birthday right after we moved here, so he had no friends yet to celebrate with. If you recall, we did actually run into the one person that he did know, so it was still pretty nice for him. The Krispy Kreme Doughnuts we'd been deprived of for over a year helped too!

Today is my firstborn's 12th birthday. Nathan is the one who changed my name from Heather to Mama. He's a pretty special kid. We celebrated with a weekend of fun. Yesterday we invited half a dozen boys to go to a local Laser Tag place. We rented a van and driver for the day so we could go collect all the kids, take them out to the place, and then bring them back for pizza and cake before taking them all back home again. I miss having my own car. The boys had a blast!
﻿﻿
After laser tag but before pizza, I caught a photo of the boys in their natural state. Which is to say attached to a game-playing device (in this photo there's a Wii, a DSi, a GameBoy, an iPhone and two iTouches). 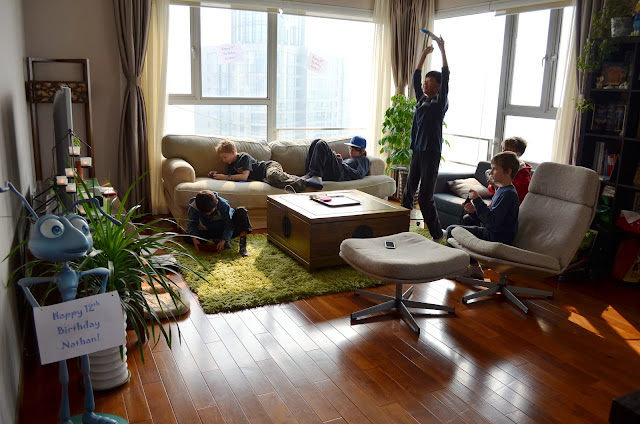 I was all ready to order a cake from one of the many bakeries on our street. But Nathan had other plans. He requested a "mom-made lemon cake." I joked with my friends, asking if they knew any moms who wanted to make it! But it's not often Nathan asks for something, so I took it seriously and tried out a couple recipes before settling on a winner (thank you Barefoot Contessa!). It was just what he wanted and I was happy to oblige. I ended up making him two cakes, one for his birthday party yesterday, and one for today, his actual birthday, which we enjoyed over at a friend's house with a gathering of a few families we know from our neighborhood. Lucky boy getting two cakes! Tired Mama baking two cakes (actually, a total of four if you count the samples...).

We ended today with a viewing of Disney's latest animated film, Wreck-It Ralph. Seeing it in 3-D in the theater set us back $75 USD for tickets alone. The pirated DVD is already on the corner for less than $1 USD. It's no wonder that whenever we go to the theater it's nearly empty!

And finally, one more photo I took of Nathan this morning in his new birthday shirt a friend just brought over from the States. Nat's the one who held out his hand and said, "hey Mom, after you take the photo, can you Photoshop in a big 12?" 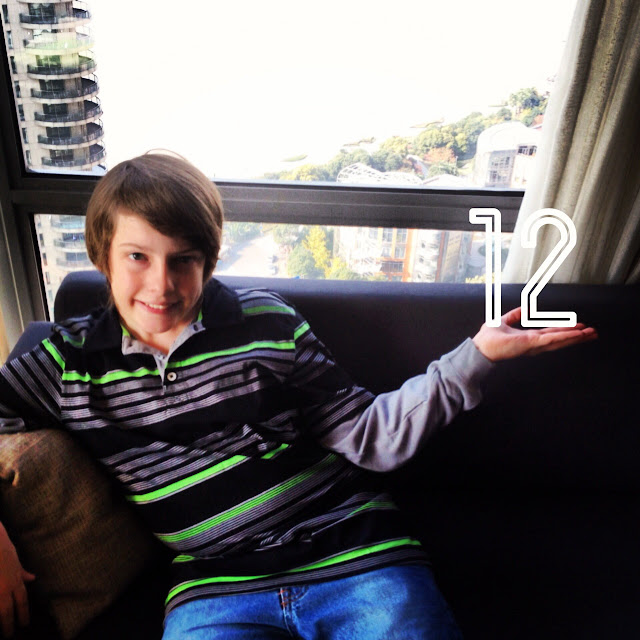