Are you an American living abroad? Have you registered to vote in the upcoming presidential election? Depending on your "home" state, it's not too late. I found a website that made the whole process pretty easy-peasy at www.VoteFromAbroad.org.

My birthday is in December and I missed voting in the 1992 Presidential election by a few weeks and had to wait another four years to cast my first vote for a president. Since turning 18, I've voted in every single election while I was living in America, including the little city elections with only one or two things on the ballot. I spent a summer in the former Soviet Union when I was 15 and it greatly affected the way I feel about exercising my right to vote. We've never voted from abroad before, as there were no federal elections during any of our previous international relocations. This will be our first time.

Frankly, I'm not overwhelmed with excitement about this election. I dragged my feet for many months on actually registering to vote abroad. My only exposure to anything in American politics right now is on Facebook. My friends are very diverse, covering every conceivable part of the political spectrum, and many of them are very passionate about their particular candidates and issues and continually post their viewpoints. Though I haven't seen a single television ad for either political party, I'm still suffering from pre-election fatigue. 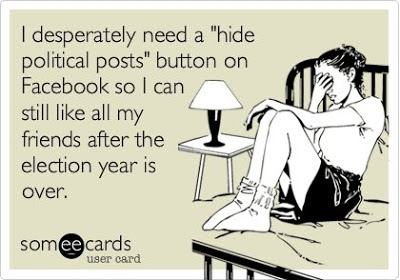 I'm surprised at my lack of enthusiasm. I confess there is a lot going on in my life right now pulling all my waking thoughts towards a few struggling loved ones back in the States and my inability to do anything helpful for them in a time of need. And I'm patriotic to a fault, but I suppose being exposed to more world news and less American-specific news means many issues currently dividing Americans aren't taking up as much space in my heart or mind right now. But I'm far from being the minority in this absence of excitement. I found this article on the Salon.com website that says American expats have the lowest voter turnout, voting far less frequently than even teenagers and high-school dropouts. I'll have to ponder this some more, and see if my enthusiasm increases as we get closer to November 6th.

So are you an American living abroad? What are your thoughts about voting while overseas? Are you excited about it or ambivalent? I'm curious to hear your thoughts. Please comment.
By Heather Rose-Chase at October 10, 2012