This is mainly for the grandparents, who haven't seen their grandsons in sixteen months, and won't see them for at least another four months.

My sons are growing like crazy. My oldest, Nathan, turns twelve in three weeks. Tonight I was walking next to him and he allowed me to put my arm across his shoulders. My arm was uncomfortably high. I think he's now taller than both his grandmothers. Sorry Mom, now Ben is the only one in the family shorter than you. For now.

Last week I made Nathan try on all his pants as the weather is cooling off and I wanted to see what still fit from last winter. The answer? Three pairs of jeans. He's like my Dad though, always hot, and will happily wear shorts and a tee even in the chilliest weather. I also went through his shirts and found almost all of them are too tight across the chest and armpits. He's been wearing the same four shirts every week and I'm about ready to burn them because I'm sick of seeing them! So tonight I broke down and took both boys clothes shopping.

I miss Macau and Hong Kong and their myriad of inexpensive clothes shopping options. For that matter, I miss America and Old Navy! I found Nathan half a dozen new shirts at H&M. He picked them out, so he better wear them!

Benjamin, who turned nine this summer, is also shooting up. He also had only three pairs of jeans that weren't capri length or sporting holes in the knees. So while I helped Nathan in the men's department, impatient Ben did his own shopping in the boys section. He picked out brightly colored skinny jeans and a polyester track suit jacket which he said was very "hipster Tron."

Ben is obsessed with exercise, doing sit-ups and push-ups and jumping jacks every day. His goal is to be able to do 100 sit-ups. He doesn't quite have six-pack abs, but he does have at least a four pack. And the skinny jeans that were long enough to reach his ankles were not quite skinny enough for his waist. He's the only one of us who might be able to fit the clothes in the non-American stores here in Shanghai. He must get his slenderness from the Chase side of the family, us Roses are of much heartier stock.

Both boys are quite opinionated on what they like to wear. Nathan is motivated strictly by comfort and the colors black or grey. Benjamin has a bold and quirky sense of color combining and a very strong idea about what looks good with what and only wants to look (his idea of) cool. 99% of the time he has free reign to wear what he likes and express himself freely.

There is more shopping to be done. Nathan still needs more pants, but It will have to wait. It's honestly been six months since I've been clothes shopping, or even just window shopping. It's overwhelming for me, out of practice as I am. I can't imagine it's any better for them. I did pick up some things for myself, three black v-neck sweaters from three different stores. I have six other black sweaters, which is all I generally wear in the fall and winter. I guess I shouldn't come down too hard on Nathan wearing only those four shirts, huh? 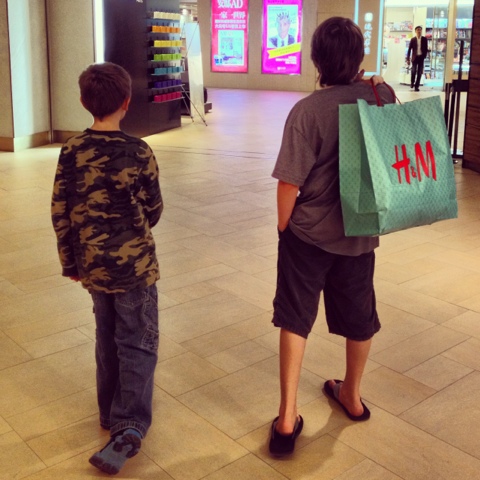 Email ThisBlogThis!Share to TwitterShare to FacebookShare to Pinterest
Labels: Shopping