I'm sure I've mentioned here before how I just don't enjoy cooking. I didn't even learn how to cook until college when my cousin Dar realized I wasn't joking about not knowing how to make pasta and took me under her wing. It's no secret that if given the choice to go out to dinner or to stay in and cook dinner, I'm always going to pick the choice that involves someone else doing the meal preparation. I'm not a bad cook (anyone who has ever eaten one of my meals would agree, unless they are really good liars), I just don't enjoy it like many people do. Or at least I didn't. I think things are changing. Ever so slightly anyway.

A few years ago I found out I have a slight allergy to shellfish. By slight, I mean it is not life threatening, it is just very annoying. Within 24 hours I turn bright red and I itch all over for almost a week. No breathing difficulties or stomach issues, thankfully. However, as with any allergen, repeated exposure can make the severity of the reaction increase over time. So I don't push my luck. In America, you can better cope with a food allergy or intolerance because there is some transparency as to the ingredients of any given dish, whether by asking the wait staff, chef, or looking at the list of ingredients on many menus. But I don't live in America. I live in quite possibly the worst place for someone with a shellfish allergy. A place where products like oyster sauce are used to add flavor even in vegetarian dishes. Yikes.

Maybe you can guess where I'm going with this... After a few reactions from dining out in Macau and spending half a week in a Benadryl haze just to keep the itch down to a bearable level, I was less inclined to want to eat out. Couple that with the fact that many of the restaurants in Macau just aren't that delicious (and the ones that are are cost prohibitive) I found myself cooking and eating at home more and more often.

Then there was challenge number two: scarcity of ingredients. When we first moved to Macau, I went into a grocery store called US Mart (no, it didn't really stock just products from the US, but it did have a lot of international goods) and saw a huge display of salsa. It was the entire end cap, top to bottom shelf, nothing but salsa. The part of me that loves spicy Mexican food did a little dance right in the aisle. Macau was a place I could live forever! One month later, all the salsa was gone. And for several months after there was none to find in the US Mart or any other grocery for that matter.

I brought with me a shelf of cookbooks plus all my tried-and-true recipes that I've collected since I first learned to cook in college. And every day, I'd pull out a recipe only to find that several of the ingredients were simply not ever available in Macau (molasses!), or they'd been cleared off the shelf not to return for a month or so. If ever I wanted to eat out, it was the days that I would go to three different markets only to come home exhausted and empty handed. Challenging indeed. I think this is when my attitude toward cooking started changing.

Instead of a draining daily task, putting edible, dare I say delicious, food on the table became an adventure. And if there is one thing about me that I hope you've learned from reading my posts, I do love an adventure. Instead of pulling out my recipes, making a shopping list, and then heading to the store, I would go to the store first for inspiration. I know this goes against every recommendation for how to save on groceries or how to plan meals in advance. But groceries in Asia (particularly imports) are expensive, period. And planning meals in advance is a modern western notion. Tiny kitchens, lack of storage space, laughably small refrigerators, and lack of preservatives in baked goods, mean grocery shopping happens frequently, if not daily. I never passed a market in Macau without at least a cruise up and down the aisles (most are tiny mom-and-pop places with two aisles, max) to see if there was anything that jumped out as interesting.

I experimented a lot with all whole foods... nothing prepackaged in a box, nothing from a can, nothing that would be considered convenience food, which let's be honest, made up the basis of my cooking repertoire in the States. But you can't make chicken with Stove Top Stuffing if you can't buy Stove Top Stuffing (or any other brand for that matter). Thankfully I had very few complete disasters, a huge blessing due to the price of groceries!

This leads me to Shanghai. Unlike Macau, China is not duty free. So imported goods are wallet-screaming, jaw-droppingly expensive. As in you might as well eat out every night for the price you're going to pay for imported spicy Italian sausage, two jars of Classico tomato sauce, a pound of mozzarella, and Barilla pasta to make a penne pasta baked casserole (my normal meal for a crowd borrowed from my sister-in-law which in Shanghai costs close to $50 USD using those American brands which are fully available in the giant Costco-sized grocery stores here in Shanghai. Ouch.). Our first month here I was so excited to see Rice-A-Roni, even at $5+ USD a box that I bought a bunch. And then regretted it as soon as I cooked it and realized that I prefer my own made-from-scratch Spanish rice.

Just this week I confessed to Michael that though I still don't "love" to cook, I do find a surprising amount of satisfaction in creatively creating meals under such challenging circumstances. I'm glad we don't have the ability to see the future, because if my 18-year-old ignorant of how to boil water self could've had a glimpse of what I can now do in the kitchen using only "real" foods, she would have fallen over and maybe cracked her head. Or maybe not. Because along with adventure, one of the things I value most in life is creativity. And the ability to shop at Costco and fill my minivan with a huge shopping cart of foods that only require heating to make a complete meal doesn't exactly require creativity. But take that away and confront dried beans, rice, chicken (with head and feet still attached), and an aisle of exotic spices and sauces, and suddenly creativity becomes a survival tactic.

This is my current wallpaper on my phone: 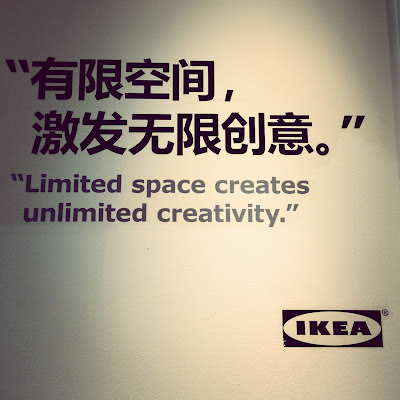 It's well documented that IKEA is my Happy Place (see link above about my cousin Dar teaching me to cook). Part of what appeals to me about them is the idea that you can do so much more with less. You can find storage in unexpected places. You can have quirky and beautiful household goods that serve more than one purpose. It inspires me to do more with what I already have. But I think the quote above is what makes my heart beat a little faster whenever I see the iconic blue building with the yellow letters. They value creativity as much as I do. I like to replace the word space with lots of other words when presented with a challenge. Such as "Limited time creates unlimited creativity." Or money. Or foods you can eat thanks to allergies and sensitivities. Or available ingredients for putting dinner on the table.

Maybe if I only had a wet market, a frozen meat shop, and a few tiny grocery markets to choose from when I was 18 I would be a far more accomplished cook twenty years later. Sometimes having more than you need can be a stumbling block to creativity, whether it's in the kitchen or in the arts. I'm not sure when it happened, but about six months ago I noticed that I stopped saying, "if only I had...." and just started making brilliant things with what I had. Because what I do have, what I believe everyone has, is unlimited creativity. We just have to live like we believe it. And I'm so grateful to be living this life which shows it to me over and over again in so many ways. Even if at the time it's mighty inconvenient and requires actually spending time in the kitchen!
By Heather Rose-Chase at September 26, 2012