This is China, Birthday Edition

Last week I brought up the subject of birthday gifts with Michael. The only thing he requested was to sleep in on his birthday. I don't blame him. He always leaves the office at 6:00 p.m., getting home by 7:00. But every day it seems he's going in earlier and earlier. Most days he's up at 5:00 a.m. That would kill me. Most days I'm just finally falling asleep at 5:00 a.m. Grrr, stupid insomnia...

Anyway, sleeping in was about the easiest thing to accomplish. The normal daily routine is Michael leaves, kids get up and go downstairs to walk the dog, feed themselves breakfast, and quietly occupy themselves until Mom groggily emerges from the bedroom around 9:00 a.m., reminding them to really-for-real-this-time brush their teeth and put on deodorant because holy cow, tweenage boy B.O. can knock even a tough girl like me right over. I don't want to know what the smell might do to the population at large (you're welcome, Shanghai). I figured I could reasonably buy Michael the ability to sleep in until at least 10:00 a.m. He certainly deserves it.

Last night we stayed up late celebrating with friends. Michael fell asleep around 1:00 a.m. I know I was up blogging at 2:30 a.m. based on this morning's un-funny-to-Michael post. And I was texting my Dad around 3:00 a.m per the log in my phone. Not sure when I actually fell asleep, but I know exactly when I woke up. Just after 8:00 a.m., when our oldest son opened our bedroom door, holding a frantically barking Lucy Rocket, telling us there were men at the door who wouldn't go away no matter what he told them. Michael jumped out of bed to investigate while I rolled out of bed and practically crawled to the bathroom, using only my sense of touch because my eyes weren't ready to open.

When I joined Michael at the door, I found a crew of men in jumpsuits, cigarettes hanging from their lips, cloud of smelly smoke above their heads filling our entry. I asked Michael what was up, he shrugged and said they had buckets. I looked at what appeared to be the leader of the jumpsuit gang, and asked him what the deal was. He rambled off about three minutes of rapid Chinese, while I made grunting noises and nodded as if I understood. I told Michael my guess was they were here to repair the typhoon damage. Sure enough, they poked around in the boys' room, then the office, and finally our bedroom. I flung open the bedroom curtains, to find this sight: 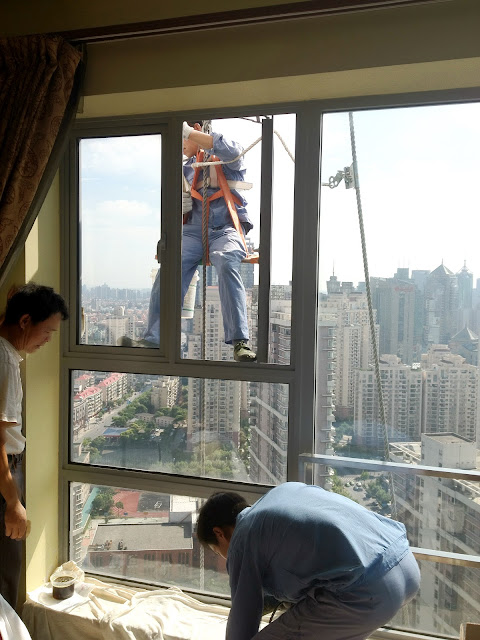 Yeah, that's a guy on a wooden plank attached to a rope outside my bedroom window. Which just happens to be ON THE 38TH FLOOR.

We were basically held hostage in our home by this crew, busy putting sealant on the outside of the window frame to stop future heavy rain and wind from making their way indoors. Which is a good thing. I don't want a repeat of the flood. But I wasn't about to leave them here alone so we could carry through with our plan of taking Michael out for another steak lunch to complete his beefy birthday weekend. We managed to get showered, dressed, eat French toast, and sit around until 2:00 p.m. when our trusted ayi (housekeeper) walked through the door. We left her in charge of making sure they didn't smoke or steal or die from a 38-story fall.

Instead of steak, we went out for Mexican at Cantina Agave. We're such regulars that the waitresses know our order without us actually having to give it. I did mention to our usual waitress that it was Michael's birthday.
﻿
The street Cantina Agave is on is filled with restaurants. It's a child's dream because every one of them has a big playground jungle gym on their front lawns. As soon as our boys were done eating, they shot outside to play with all the other children. Michael and I finished eating as the dining room began to fill up. I excused myself and went to the ladies room, where the piped in mariachi music was uncomfortably loud. Just when I thought I couldn't take it any longer, the music stopped. Whew! A moment later, it started back up, playing a full orchestra version of Happy Birthday. Oh no! I groaned and hurried out as fast as I could, to find Michael sitting all by himself, nervous smile on his face, a plate of flan in front of him, and the smell of burnt matches filling the air.

Before I go on, please know that Michael is very low key about his birthday. He hates it when we go out to eat and the waitstaff brings out cake and sings. I am very much the opposite. You cannot make too big a deal out of my birthday. So it's hard for me to restrain myself when it comes to celebrating Michael. And I knew as soon as I told our waitress about the birthday boy that there was a possibility that flan and singing might happen. But this is China. Maybe it wouldn't.

I sat down and started laughing hysterically. Michael joined me. We laughed until tears were rolling. He said that the entire restaurant staff came out to sing to him. The candle they lit for him was like a firework, spewing sparkling flames twenty inches in the air, making a loud sizzling noise. He said everyone in the place joined in with the singing and wished him a happy birthday. He noticed that two of the tables were actually filled with people we know. Everything that happened from the moment I left the table was straight out of my husband's nightmare. And the worst part, the part that keeps me laughing even now, was that he had to endure it all by himself! Michael never panics, and he is a very good sport, so despite any horror that was boiling up inside, I can just imagine him shrugging as the curious crowd in the Cantina joined in to sing while wondering why the poor guy was forced to celebrate alone.

We ended the evening back at the house with a family movie and strawberry cake. Oh my goodness, I do love this long-suffering man like crazy.

My friend Rachel wished Michael a happy birthday on Facebook, making sure to add that her wish included his day would have no "This is China" moments. Sorry Rachel. China wanted to wish Michael a happy birthday too, and evidently only knows one way of going about it - making sure, for better or for worse, this is a day that will never be forgotten!
By Heather Rose-Chase at September 03, 2012

Email ThisBlogThis!Share to TwitterShare to FacebookShare to Pinterest
Labels: Birthdays, Michael, This is China