She works hard for the money

When I have opinions about things, they are usually quite strong, and I have no problem expressing them.

I remember raising money to go on a student ambassador trip to the Soviet Union the summer after my freshman year of high school. One night my friend Samantha and I took donations for serving coffee at a debate between two local politicians battling it out for a county seat. The incumbent was a cuddly old grandfather (who would be revealed years later to be a prolific child molester) and his opponent, a cocky, brash, slick man who looked and acted the part of a career politician.

A small bit of background: throughout middle school I participated in Toastmasters, the public speaking group that meets to give speeches and help you improve, as well as how to give and receive constructive criticism. I never played a sport, so I have no trophies of golden girls with baseball bats or soccer balls. But what I do have is a box of ribbons and medals, and even a gavel, from winning many a speech and debate contest against both peers and adults who were shakers and movers in their fields. I loved (and still do love) the art of giving a good speech.

So when the cocky young guy got up to speak, I cringed at all the weaknesses in his presentation. Everything he did went against everything I'd been taught about making a powerful point. He had a certain amount of charisma, but he buried it in distracting people from his message with his terrible presentation style.

After all the political hot air was expelled, the politicians themselves made their way to our coffee stand to support our fundraising efforts. The incumbent gave us twenty bucks and shoulder pats, the slick young fella gave us a dollar and then asked our opinion on his speech.

Friends, the man got more than a dollar's worth of advice from me that night. I could see his face change from anticipating lots of praise from the two pretty high school students in the back, to confusion over the unexpected critique, to earnest interest in what I had to say, even jotting down notes on the distracting handout he gave everyone at the start of his speech. My mother, sitting nearby, was completely flummoxed by my confidence (on looking back, so am I), and lavished me with praise on the ride home for not just telling the man what he wanted to hear.

That night was a turning point for me. I realized my thoughts had value to someone other than me. I also learned that youth doesn't disqualify you from being able to share knowledge, especially if your background and experience gives you something to say in that area.

I don't have an opinion on everything. I like to know a great deal about a subject before opening my mouth. And I tend to wait to be asked rather than just spouting off, because there's a fine line between giving your honest opinion and being a bossy know-it-all. Since that day twenty-something years ago, I've learned it's even sweeter when you get paid for your opinion.

Today I was paid to visit two model homes in Shanghai and give my opinion on layout, paint color, lighting fixtures, and whether an elevator in a four story home was needed or a waste of space and energy. My biggest complaints were the wall to wall cream-colored carpet in this horribly humid climate (hello mold!) and the bizarre arrangement of bathrooms (in the kitchen! No shower or tub in the bathroom on the floor filled with bedrooms! Lack of a powder room on the ground floor!), along with their chest-high sinks (sure, westerners are tall, but their offspring start out much shorter).

A friend of a friend was rounding up expat housewives to go on this little field trip. I was more than happy to meet new friends and see the inside of new construction in the ever-growing Shanghai. My happiness grew when I found out I'd be making ~$100 to express my honest opinion of what I saw!

Will the changes be implemented? Who knows. Drywall wasn't yet up in any of the other houses still under construction, so maybe. The funny thing was the ten ladies who participated with me all had the same exact opinion on everything. The building reps seemed to take us seriously, taking our notes (and our photo) as we went through the two houses. Only time will tell.

Here's a free opinion for you - big as they were, I don't want to live in either one of them. Give me my sprawling single-story flat on the 38th floor over a compartmentalized and boxy four story townhouse (even with its own tiny elevator) any day. I didn't mention it to them though. They didn't ask my opinion on anything but the two houses they showed me! 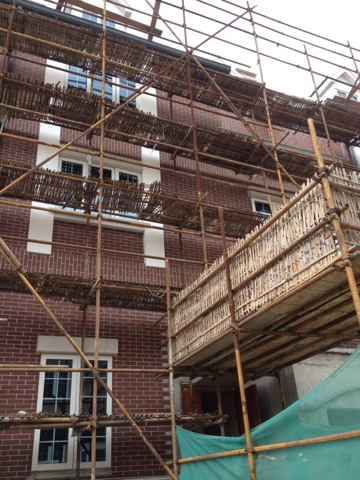 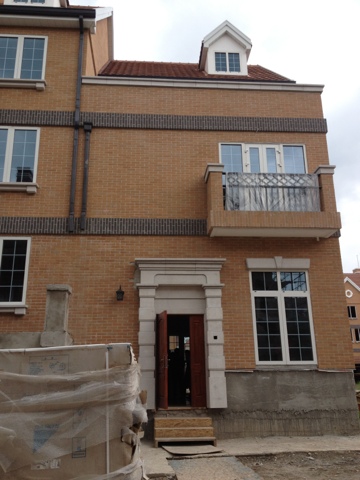 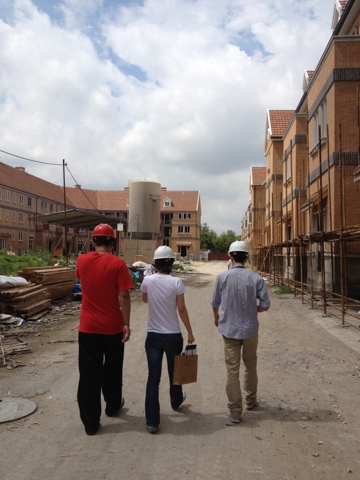