Today is the Mid-Autumn Festival, which celebrates the full harvest moon on the fifteenth day of the eighth lunar month in China. It is also celebrated in other Asian countries, such as Taiwan and Vietnam. Generally people head home to visit their family and have dinner with them (much like American Thanksgiving). It's a huge holiday here as I mentioned, everyone is off work for the week so they have time to travel to remote parts of China to be with their families.

The full moon was big and orange as it rose in the sky this evening. Incidentally, those two buildings to the left are the landmarks that help me find my neighborhood, as well as the entrance to the nearest Metro station. I call them the Death Star and the Christmas Tree in honor of the ornaments on the top. Wouldn't you? 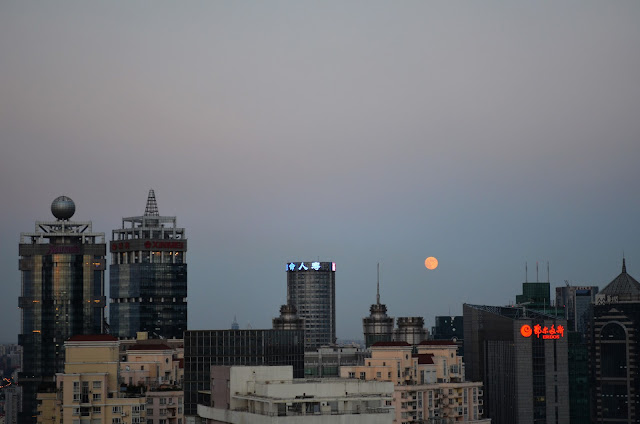 One way people celebrate the Mid-Autumn Festival is to give and share mooncakes. Traditionally, mooncakes are a pastry which contain a very dense filling of lotus-seed paste along with a salted duck egg yolk to symbolize the full moon. Though only about the size of the palm of your hand, each mooncake has about a thousand calories. Nobody eats a full one themselves, they are sliced into wedges and shared with your friends and family.
﻿﻿
Last year in Macau, we spent the Mid-Autumn Festival at the Galaxy resort with friends, and shared the tiniest slivers of a traditional mooncake among seven people. Not one of us enjoyed it, and the remainder of the box was given to our helper from the Philippines who loved the taste of them. Glad they didn't go to waste, especially since they are expensive, labor intensive products.

This year, Michael was once again the recipient of many mooncakes from business associates and his company. The best ones, however, were the mooncakes from Haagen-Daaz, made with ice cream and a graham cracker-type crust. We also saw them all over town, in Starbucks, in Coldstone, and in every bakery and ice cream shop, made from a wide variety of delicious and non-traditional ingredients. Though I have no photos of the ice cream mooncakes (sorry, they were consumed on the spot!), I made sure to take some of the adorable Disney mooncakes, as well as some very high end Four Seasons mooncakes, gifted to Michael from a client.


These are the mooncakes from the Four Seasons Hotel Shanghai. As you can see, the packaging is quite luxe, which is typical of most mooncakes, but this one is extra fancy. The price was included on an insert. This box of four was 338 RMB, which is about $55 USD.
Here is the exterior of one of the Four Seasons mooncakes. Typically it would have the Chinese word for "harmony" or "longevity" but this is just a fancy design. This completely covered the palm of my hand. There were four different types of mooncakes included, and I cut each one open for us to sample together. 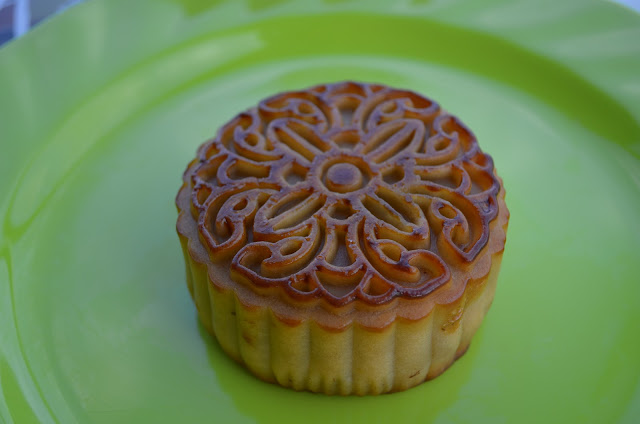 The first is the most traditional. It has a double egg yolk and white lotus seed paste. This one tasted a bit more savory than the rest, though none could really be classified as "sweet" to a westerner! 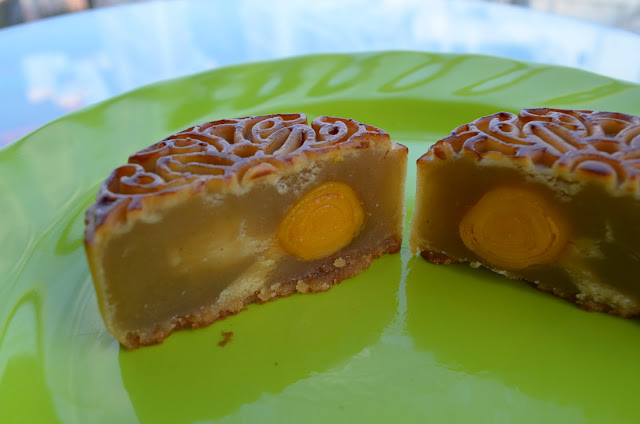 This second one is cream custard with salty egg yolk. It was the sweetest of the four, and my son Benjamin ate about half of it. 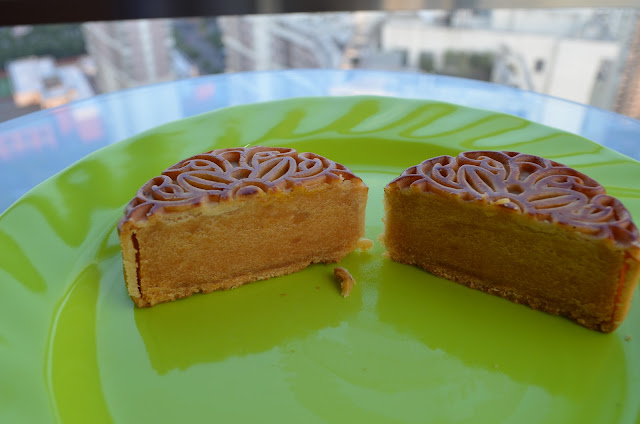 The third one is made with Tie Guan Yin tea, which is a type of Oolong tea. Today we went to Coldstone Creamery and they had a Tie Guan Yin flavor of ice cream. This mooncake was the most edible in my opinion, even Michael ate a quarter of it! 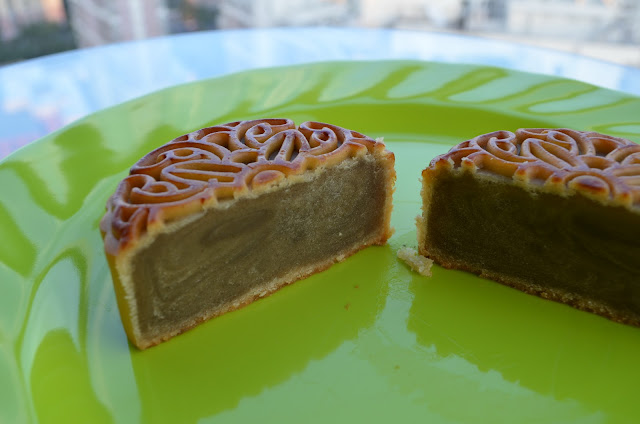 The final mooncake was made with purple sweet yam. It tasted a bit like unsweetened pumpkin. 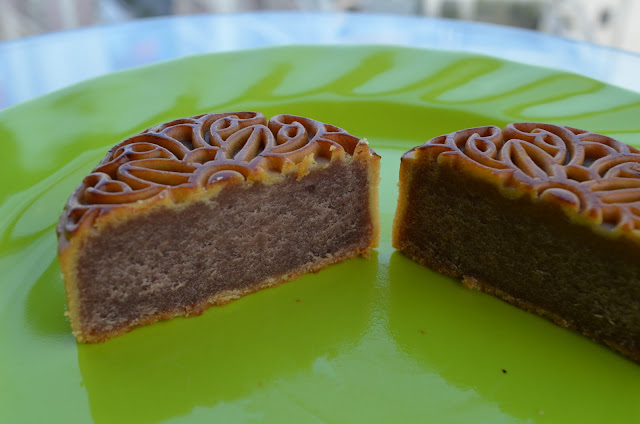 I always do my best to remain completely neutral about foods I don't care for so I don't unintentionally negatively influence my kids. I want them to try everything. I figured after last year's sampling of mooncakes on the Galaxy lawn, Nathan and Ben wouldn't want to be anywhere near these. Maybe they forgot, because they were both happy to sample them all.

Next up are the mooncakes Michael got from work. Of course, everything Disney does must be cute and feature Mickey Mouse! The packaging here isn't luxe at all, but it is adorable, and the back side of the packaging featured a little moon you could take through its phases over Mickey and his friends camping. Each box contained two mooncakes. 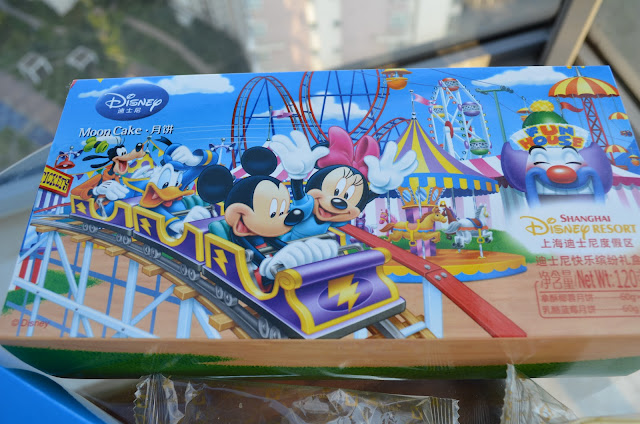 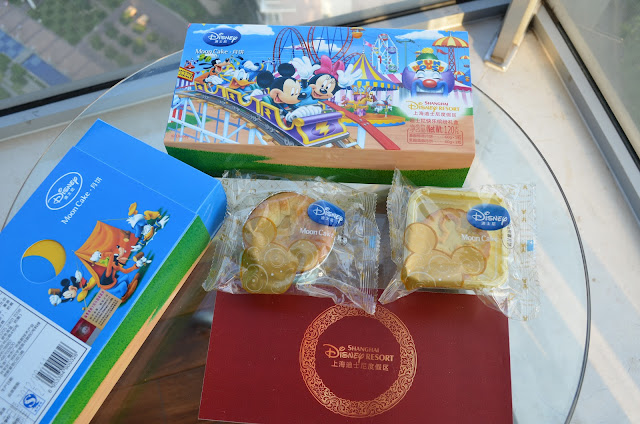 They were much smaller than any we've seen elsewhere. But none of the others we've seen had Mickey on them! One was like the others above, the other came in a little pie tin. 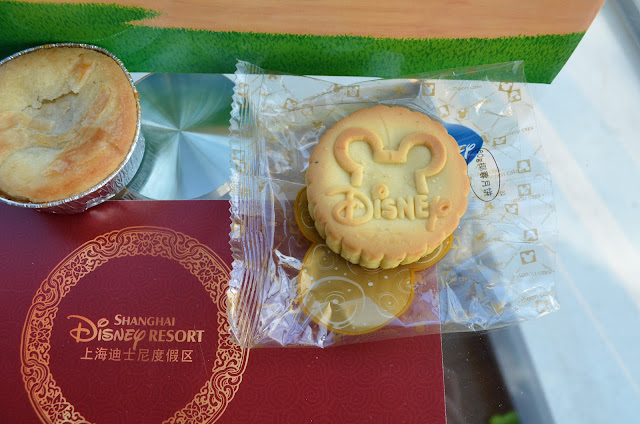 The Mickey mooncake had a coconut filling. My boys ate them in one bite! The one in the pie tin had a very western-type pastry with a berry filling. Other than the ice cream mooncakes, this one was my favorite! 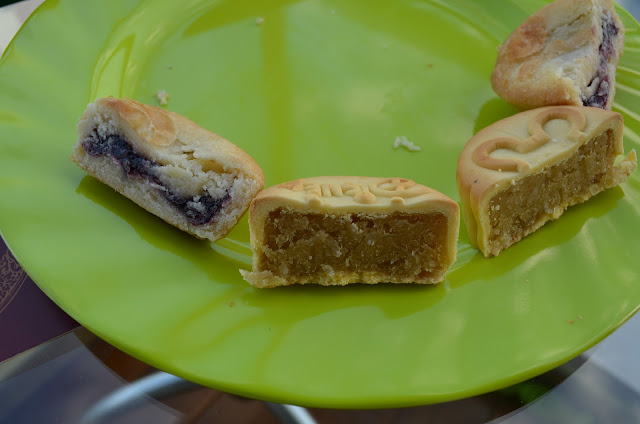 And of course it wouldn't be a Chinese festival without fireworks! When we were house hunting in Shanghai, we had three top picks. One was right near Century Park, which we were told has the very best fireworks throughout the year. I do love fireworks (and the ability to see them from the comfort of my own home) but there were other considerations so we didn't choose the flat that overlooked the park. But guess what? It doesn't matter, because our flat here across town from Century Park still has a killer view of the fireworks from our bedroom! The fireworks went on for more than an hour, every minute was just like what you would expect from a grand finale anywhere else in the world. There will be a repeat of the firework extravaganza two other nights this week! This is China! 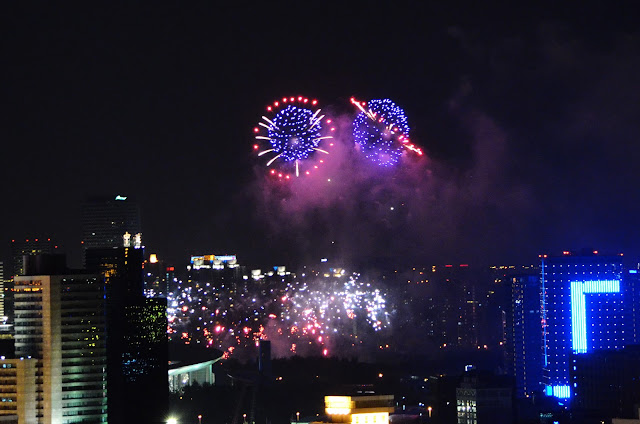 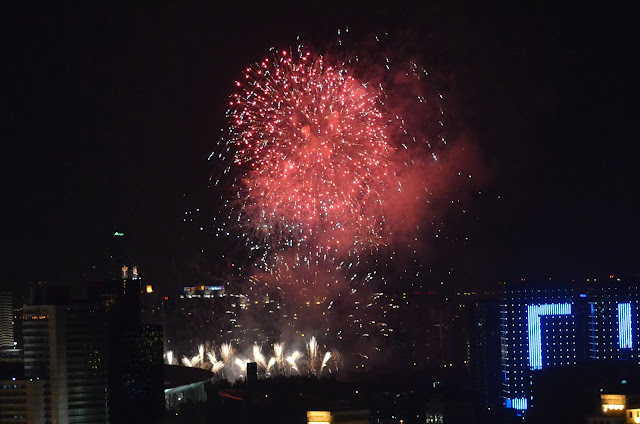