Happy birthday to my husband, who is getting the gift of seeing lots of movies in the theater, eating lots of expensive, imported steak, and the new iPad, which he'll have to wait to open until our next friend from the States arrives because the price in China is quite a bit higher than the price in the USA. Which is ironic as it is made here, sent to America, and then imported back to China at double the cost, months after the rest of the world is already growing bored of it.

In related news, we had to buy a printer today to replace the one we brought from the States. I need to use the scanner regularly, and the scanning function decided to cease. We've been shopping around, bargaining with all our might (nothing really has a fixed price in China), and found the cheapest option on the model we wanted was still over twice the American listed manufacturer's suggested retail price. It was painful to spend the money. But while our friends can bring us an iPad in their carry on, a giant printer/copier/scanner is a little more tough to manage.

So happy birthday to Michael! Continue to enjoy your old iPad for another month! I wanted to write him a little poem, but then I saw this tee shirt and felt it said everything I wanted to say, only better. Better, meaning in a funnier manner. It's so deep. I think. It's hard to tell. 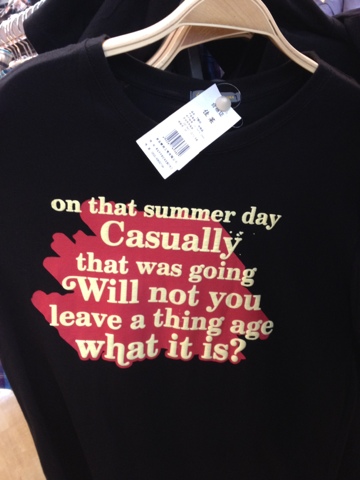 ***Edited to add: Poor Michael just asked me to please explain the tee shirt, and what exactly it means. As far as I can tell it doesn't mean anything. I just thought it was funny, in the way that only that special blend of Chinese and English combined in a semi-random manner can be funny. And it has the word "age" in it, so I thought it was appropriate. If you read it dramatically with lots of pauses, it sounds like it could be a pharmaceutical commercial with lots of soft focus and two people riding bikes along a lake... It was after 2:00 a.m., maybe I need to do less blogging in the middle of the night? I'll write you a real poem, Michael.
By Heather Rose-Chase at September 02, 2012

Email ThisBlogThis!Share to TwitterShare to FacebookShare to Pinterest
Labels: Birthdays, Lost in Translation