We survived a Level Red typhoon in Shanghai. Of course, it stayed at Level Orange until Michael got into work, and then bumped up to a red. At that point he was "requested" to stay where he was instead of being sent home. 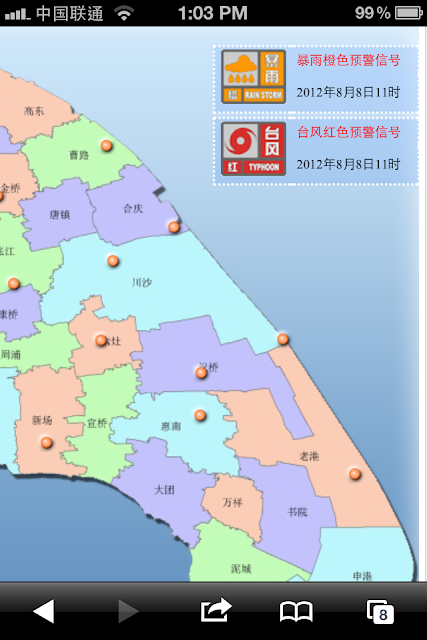 The boys, our guest, and I sat around the house, marvelling at the empty river. At Level Orange, all tour boat operation ceases and ships are sent into a safe harbor, but the ferries still operate. At Level Red, the ferries stop. Even in the dead middle of night, I've never seen the river without a boat or two, heading out to sea or returning with containers or soil. We had plans for the day, but most places close down at Level Orange, so we just stayed put knowing Level Red meant getting anywhere was going to be difficult. Some of the bridges closed and the Metro trains began running at 50% speed. 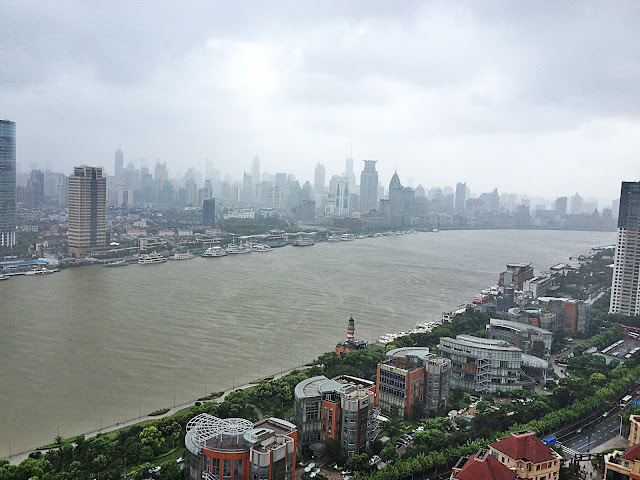 In the afternoon, it finally decided to start raining and we were so glad we didn't try to go out! It rained so hard and so fast, filling the intersections below with water, which the few cars on the road tried to avoid. The wild wind made the rain on the window trail horizontally. At about 2:30 p.m., I walked into the boys' room and noticed it smelled very wet. They have their own bathroom in there, so I though perhaps it was just musty. But I went to look out their window and noticed water pouring in from beneath their window ledge. The wind was particularly battering that side of our flat, so I quickly ran to check the office window and our master bedroom window. The office was fine. The master bedroom? It had streams of water coming in from where the top of the window met the frame. 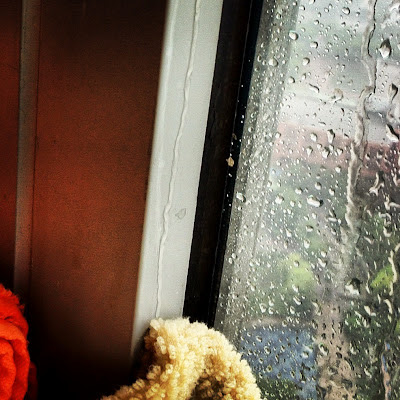 When we left the States, I brought ALL of our towels with us. As much as the boys swim (and make general messes), it was a wise decision. As our bedroom and the boys' room began to swim, it was even more wise than I could have imagined! Before the night was through, I used close to 30 towels, sopping up the water that just poured in. The wind and rain were so fierce!

While checking Twitter for updates on the storm, I saw Shanghaiist was asking for haiku poems to commemorate typhoon Haikui. I spent a minute writing one and sent it in, which they then published on their website (here). It made me wish I'd spent more than a minute on it, but it was still the highlight of the whole typhoon for this girl!

Michael decided to brave coming home at about 5:00 p.m. I called several places who normally deliver for dinner, but all of them were closed due to the typhoon. Since we've been on the go sightseeing, we've had no time for grocery shopping. I scoured the freezer and pantry, and found some frozen burgers and buns, and a head of lettuce, as well as a bag of frozen potato wedges. I fired up the electric oven and popped in the potatoes. Halfway through the cooking time, our flat was flung into total darkness. An alarm (which we assume is there to tell you you've lost power) began wailing in the kitchen. We checked our elevator lobby outside our front door, and the elevators were still running and had power there.

I went around lighting candles as the last of the day's sunlight faded from behind the black clouds enveloping Shanghai. I took the elevator to the lobby, and through a particularly expressive interpretive dance, learned that the whole building (except the lobby and elevators) had lost power, but the appropriate people had been informed and power would be restored.

Michael came through the door and lit the gas burner on the stove, and I used our grill pan to cook up the burgers by candlelight. When they were done, I opened the electric oven door and pulled out the potato wedges. They weren't crispy, but they were hot and we were starving. As we ate in the glow of candles, the boys noted that we were truly in survival mode, as we were forced to eat leaves for dinner. Lettuce, leaves, it's all the same when you're eleven! I felt like it was survival mode as the temperature in our flat rose from the lack of air conditioning! Hot, rainy weather is so counter-intuitive when you're used to cold winter storms in Los Angeles!

After dinner, we put an iPod on our battery powered speaker set, and listened to some comedy from Brian Regan in the dark. Just as our still-slightly-jet lagged guest decided to call it a night, the power came back on. I was able to put some more towels in the dryer and mop up more water before putting the boys to bed.

The worst of the storm passed, and by midnight all I could hear was the wind. This morning the day was bright and dry and very, very hot. I read that two people died in the storm, one here in my neighborhood when a piece of glass fell from a building and struck her. I don't feel like we were ever really in danger, it was more of an exciting adventure mixed in with tedium from being trapped indoors.

Today was business as usual around town, and our guest and I continued on with our plans to see as much of Shanghai as possible! He leaves in one week, so you'll be seeing more photos of our adventures then. Right now I'm too exhausted (and hot and sweaty) to sit and write, I just shower and fall into bed each night! Life here is never dull, that's for sure!
By Heather Rose-Chase at August 09, 2012