In Macau, there's a saying to describe all the crazy little things that happen on a daily basis which are so unusual but end up becoming comically normal: This is Macau. The bus schedule says the bus comes every 10 minutes but you've been waiting for 50, and then when it comes it blasts right past you? This is Macau. Your house has been wired in such a way that using your hair dryer in the bathroom will trip the fuses for 75% of your flat, so you have to blow dry your hair in the living room? This is Macau. Calling for a taxi for 20 minutes to be repeatedly told "sorry no taxi" only to walk a block from your flat to find a line of 20 idling taxis anxiously awaiting fares? This is Macau. I could go on all day, but I'll stop. Because I'm not in Macau. I'm in China. And China is just as bad, if not worse. And within a week of being here, I heard a couple people sigh at something weird and say This is China, which was strangely comforting.

Let me share a couple This is China moments off the top of my head:

The gas company hand delivers your bill to your door, and then stands there waiting for you to pay, in cash. The rest of the bills you pay using an ATM in the management office down in a corner of the parking garage under our complex, or in cash to the teenage kid behind the register at the Family Mart (the Chinese version of 7-11). I can't pay my bills online because I don't have a Chinese passport. Or at least that's what Google Translate informed me when I tried to register and my passport number was repeatedly rejected.

Speaking of passports, a government official comes round every now and then to check how many people live in your house, what country you are from, and to take a look at everyone's passport, jotting down names, birthdates, and passport numbers of everyone who happens to be home when they stop by. They are very friendly about it, but still.

You can get everything you need from some guy on the street. Example 1: I bought half a dozen huge plants from a man who swings by every day on a large tricycle filled with them. There's another guy who comes by with produce, but I've not yet sampled his wares.

Example 2: Every week a shirtless guy positions himself on the sidewalk in front of our complex with a very old fashioned foot-powered spinning wheel contraption attached to a thick leather strap. People come from all over the neighborhood to get their knives sharpened by him. I tried to take a photo, but he held up a very large knife and said no. I didn't push the point.

Example 3: I needed to find someone to duplicate our very unique front door key. I looked everywhere for a locksmith (in the obvious places an American would look) to no avail. After sharing my trouble with our Mandarin teacher, she kindly took me for a walk through a neighborhood a few streets from our house to a tiny shower stall of a shop. They didn't have the key I needed, but recommended I walk a few blocks east to a busy street with a pedestrian overcross. If I looked under the bridge, I would find a guy who could help me. I was skeptical, but did as I was told. Sure enough, tucked in under the bridge was a guy sitting on a tiny wooden stool with a tiny wooden table with a very old and rusty key making machine. I had to bend in half to fit under the bridge to show him the key. He couldn't help either. Finally I saw a van with the back open parked near our train station, which had what looked like key supplies shoved in the back. What's approaching a van compared to a guy under a bridge? I boldly showed the closest smoking man my key. He had another guy come make me copy. Who needs the Home Depot when you can get what you need from the back of a van? 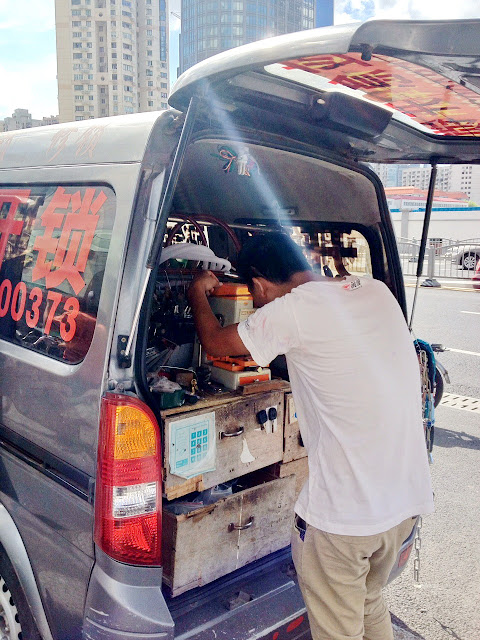 The man who delivers my groceries does so on the back of an electric scooter. Imagine a full sized American shopping cart, filled with groceries including 10 gallons of water. Now imagine it bundled together and strapped to something the size of a Vespa, with slightly more power than your own legs could provide on a bicycle. I try to tip him the equivalent of a buck or two, he doesn't always let me. Tipping here is pretty much a no-no. It's somewhat of an insult, like you're saying the person doesn't earn enough of a salary on his own and has to rely on handouts. The no-tipping policy may be one of my favorite things about China!

Every food product here has a Chinese label plastered over the one part that you may actually need to read, like the ingredients or the directions. It could be a huge box, but the one part you want to see is always covered. And trying to remove the industrial-strength label inevitably destroys the container or the label underneath, so you have to guess how long to cook it and hope whatever it is doesn't have shrimp in it, which will turn me red and itchy.

The Metro (the subway/train system) has x-ray machines at every entrance, with graphic poster-size photos of trains that have been blown up by explosives. The attendants will make you put your backpack through, but not your purse, messenger bag, shopping bag, or cardboard box. I guess people who wish to blow up trains only put their bombs in backpacks! They aren't all that vigilant about actually watching your backpack as it goes through the x-ray machine - I've seen more than one snoozing attendant and have gone through plenty of times when there was a person telling me to put my bag on the conveyor but no person actually sitting behind the machine to peep inside my bag. As long as we all feel safe, right?

Although there is so much more, that's all for today. Had to do something while I sat around waiting for yet another repairman (this time for the power button on the hot water heater which popped off and took the power with it) who didn't show. Or else he did show, but decided to come over in the 15 minutes I ran downstairs to walk the dog. But that's okay, we don't really need hot water, do we? I mean, This is China after all. Why would anyone want a hot shower when it's summer?
By Heather Rose-Chase at August 30, 2012

Email ThisBlogThis!Share to TwitterShare to FacebookShare to Pinterest
Labels: China, This is China