So our first houseguest in Shanghai departed today. 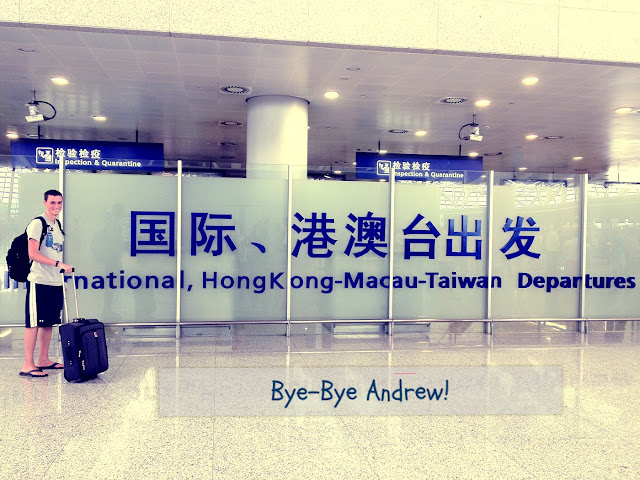 He says he had a good time, and I'm going to believe he was telling the truth despite the many calamities that happened during his three week stay:

One chipped tooth. (His, done right before he left for the airport. He took it home in a baggie).

Two car accidents. (Yep, Andrew and I managed to be in yet another car when it got mangled. But we were not mangled. I promise. And surprise, surprise, it wasn't in a Volkswagen!).
﻿
Two whining, crying, complaining rotten kids. (Mine, unhappy with the lack of routine and all the crazy changes being thrust at them in the last month with the addition of constant sightseeing and lots of getting lost in 95F heat).


Three typhoons. (And a wet apartment and power loss to go along with them).

Four colds. (Nathan was the only one to escape getting sick this month).
﻿

Five (or more) hours spent wandering, lost, looking for things that have moved,  no longer exist, or were mysteriously hidden from view when they should have been in plain sight. (That's five cumulative hours, not all in one day).

I better stop now, or else our first houseguest will be our last!

But Andrew is a good sport. He's been to Haiti twice and Israel once. Shanghai, with its western veneer is a bit less strange than those other two places. I think. Good thing I'd asked him what his expectations were before he arrived (none really, other than being present and doing whatever we were doing). This meant he didn't mind the fact we were seeing everything for the first time right along with him, no way to know if anything was going to live up to the hype, greatly disappoint, or be appropriate for active 9- and 11-year-olds. Also, he was the perfect chilled out counterpoint to my tense, high-strung children.


And speaking of the children - my head is spinning from how rotten they've been over the last three weeks. My heartfelt apologies to Andrew! I want to say that they are not normally like this. But it is really difficult to gage what normal is these days. They (like everyone else in the world) thrive on routine and boundaries and on having a calm, cool, collected Mama. For the last... oh golly, let's say six months... there have been no consistent routines, boundaries that change weekly or monthly as our situation has changed, and a Mama who has been struggling with holding everything together, mourning for things lost while also overjoyed with the opportunity for adventure in a new place. Kids may be more resilient than adults, but they also lack the skills to articulate their own sense of loss, fear, and excitement. So of course it comes out in unsavory and embarrassing behavior.

As we bid farewell to Andrew and the wild three weeks of jam-packed, non-stop activity, as well as the last six months of uncertainty and whiplash-inducing change, we also need to warmly welcome a new phase of our international life. It's time to dig in and make a new normal with new routines and boundaries which will make us all feel safe and secure and move from simply surviving to actually thriving. It's a lot of work, which for the most part sits squarely on my shoulders, but it pays off with contented children, a happy husband, and a less crazy Mama. So while I can't guarantee that any of the other things from the list above will not happen to you if you come visit, I can promise that there will be improvement in the misbehaving children area. Starting right now while I dole out some affection on them as they sniffle over Andrew's departure. I don't blame them for being sad, Andrew is pretty awesome. Safe travels, friend! Here's hoping nothing but blue skies, safe drivers, perfect health and perfect teeth await your return to America!
By Heather Rose-Chase at August 15, 2012